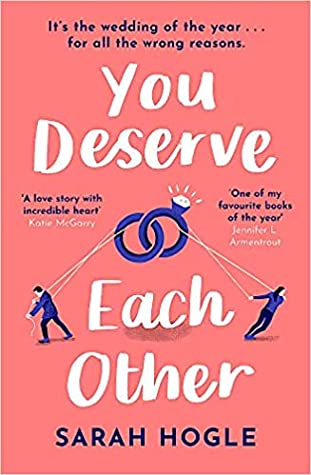 Meet Naomi and Nicholas: the perfect couple. They never fight! They never disagree! Even their names match! Their glorious, lavish wedding is coming up in only three short months . . . and they are utterly, disgustingly, miserably sick of each other.

But there’s a catch: whoever backs out first will end up bearing the brunt of the wedding bill. When Naomi finds out that Nicholas has been feigning contentment as much as she has, the two of them go head-to-head in a battle of sabotage, pranks, and all-out emotional warfare to see who can annoy the other into surrendering first.

Now that they have nothing to lose, they’re finally being themselves. They’re having so much fun getting on each other’s nerves that it starts to feel like something else entirely — and mutual destruction suddenly doesn’t sound so bad after all.

I picked this up only because it has my favorite trope. When I first read the blurb, I thought it would be a fun rom-com. The characters were fun, but they’re also god damn stubborn. They fight with each other because of silly issues and misunderstandings. If they had just talked with each other for a sec everything would’ve been resolved but nooooo they had to drag it out with silly pranks, bickering until they’re totally worn out.

I liked Nik’s character more than Naomi. She really irritated me sometimes with her rude behavior and spiteful nature. While Nik’s trying to save their relationship, Naomi is determined to end it. I’m not saying Nik is downright good guy because he’s also equally responsible for failing in their relationship but at-least he was trying. I honestly don’t know what to say about the romance between them. While their pranks were enjoyable, some of their bickering seemed pretty harsh especially from the Naomi’s side. She started to get on my nerves with her negativity. I’m glad they resolved the misunderstands in the end. Coming to the secondary characters, I liked Naomi’s controlling mother-in-law character. She’s the bad guy but I still enjoyed her character and I really liked how the mc’s team-up together against her.

The plot was entertaining but it was nothing new. It was easy to predict how it’s going to turn out in the end. The pacing and the writing was good though. The book was written in Naomi’s POV and it was a little disappointing that we didn’t get Nic’s POV. I mostly prefer dual POV’s in my contemporary romance reads unless it’s a mystery novel.

Overall, it was an okay-ish read. It isn’t my favorite enemies to lovers romance but if you’re looking for something fun with less emotional baggage then definitely give it a shot.

5 thoughts on “You Deserve Each Other By Sarah Hogle [Review]”