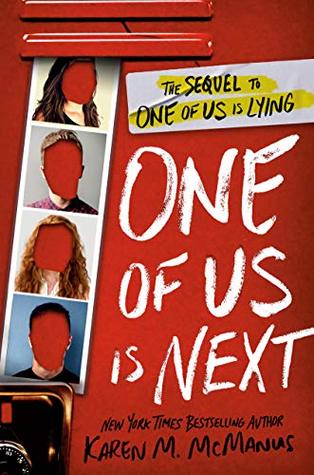 Come on, Bayview, you know you’ve missed this.

A ton of copycat gossip apps have popped up since Simon died, but in the year since the Bayview four were cleared of his shocking death, no one’s been able to fill the gossip void quite like he could. The problem is no one has the facts.

This time it’s not an app, though—it’s a game.

Phoebe‘s the first target. If you choose not to play, it’s a truth. And hers is dark.

Then comes Maeve and she should know better—always choose the dare.

But by the time Knox is about to be tagged, things have gotten dangerous. The dares have become deadly, and if Maeve learned anything from Bronwyn last year, it’s that they can’t count on the police for help. Or protection.

Simon’s gone, but someone’s determined to keep his legacy at Bayview High alive. And this time, there’s a whole new set of rules.

I loved the author’s One Of Us is Lying, and Two Can Keep a secret. When I heard there’s going to be a sequel with a new set of characters, I was very excited. Well, I ended up liking this book, but I didn’t enjoy it as much as the author’s other works. It wasn’t a bad read, but it failed to meet my expectations. It seemed a bit slower than the first book. The story wasn’t suspenseful and thrilling enough for me. It mostly felt like I was reading a normal YA Contemporary fiction with a dash of mystery.

There are three main characters in the book but I only cared about Maeve and Knox. Maeve is Bronwyn’s(first book MC) younger sister who helped her finding the suspect via her hacking skills in the first book. Knox is Maeve’s best friend and ex-boyfriend. Phoebe is Bayview high’s popular twin with complicated family. After the tragic events in the first book someone’s determined to keep Simon’s legacy at Bayview High alive. This time it’s not a app, it’s a truth or dare game. Each target is chosen randomly and if they don’t play the game then his/her dark secret would be exposed to everyone. When things starts to take a deadly turn, our three main characters team up to find the mastermind behind the game. There are also some secondary characters and cameo appearances that added more drama to the plot.

Coming to the plot, there was more drama and less suspense in the book. It might not be a great issue to the readers who usually likes YA contemporary fiction but I was looking for some thrills and chills. It had its thrilling moments, but they don’t last long. Compared to the first book, the pacing was slow. The truth and Dare concept was great, but the execution could’ve been better. It failed to build enough suspense and thrill to keep me engaged. I wanted it to be more like Two Can Keep A Secret. Some of the plot twists were predictable, but it’ll still keep you guessing till the end. The author’s writing was addictive. The book was written in multiple POV’s.

Overall, I enjoyed it! Even though it wasn’t a hit for me, I still think it was a good YA thriller and I’ll definitely look forward to the author’s next work.

I would recommend this book if you’re into YA thrillers. If this is your first book by the author, then I suggest you to read her previous works first.