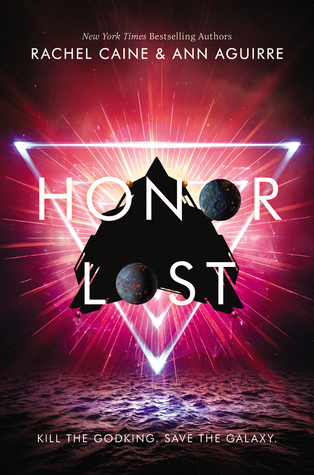 Space renegade Zara Cole may have finally met her match. Lifekiller—a creature that can devour entire planets—is spreading terror throughout the universe, and it seems nothing can stand in the monstrous godking’s way.

Reeling from a series of battles, Zara and her wounded band of allies are going to need a strategy before they face Lifekiller again. Zara’s street smarts may not be enough when their enemy could be anywhere, destroying civilizations and picking his teeth with the bones.

And just when it feels like she’s reached a special place in her bond with Bea and Nadim, an ex from Earth with an ax to grind comes after her with nefarious intentions. With human enemies, alien creatures, and mechanical stalkers on her tail, it’s down to the wire for Zara to save the galaxy—and the people she calls home—before the godking consumes them all.

Honor Lost is the final installment in The Honor’s trilogy. It’s a unique Sci-fi series filled with action, humor, and romance. I enjoyed each book in this trilogy and this was a good finale even though I had few issues with it.

The book continues from where it was off in the second installment.  Zara Cole, Bea, and Nadim are after the godking who’s destroying civilizations everywhere he lands. With the help of allies, they try to find ways to stop him even though it’s an impossible task. Things take a turn for worse, when they receive a new message from earth. They’re marked as fugitives and ordered to return to earth for breaking the rules. With two enemies on her tail, Zara needs to figure out a way to save the galaxy before it’s too late.

I loved Zara, Bea and Nadim but if I have to name my favorites that would be the secondary characters EMITU, Bruqvisz , and Starcurrent. EMITU is a medical bot with a great sense of humor. I honestly enjoyed his character. He was hilarious even in serious situations. Bruqvisz are lizardy alien type creatures who loves fighting and partying. You really can’t hate them. They’re so fun. Well, Starcurrent is a refugee tentacle alien. I found his character cute. There’re also more interesting characters like JURY, suncross, Typhoon etc. They all made this book even more fun.

The plot was great, but there were so many parts that felt dragged which is the major issue I had with this book. The romance between Zara, Bea, and Nadim seemed awkard to me. It’s not because I’m not into this type of relationships because I don’t mind triangles if it feels right. I just didn’t feel the chemistry between them.  The action parts were well done and everything was nicely wrapped up in the end. The writing was engaging throughout. The world building was amazing, as always. We meet a new set of alien creatures and I loved every one of them.

Overall, I liked this book! Although I had issue with the pacing, the characters had won my heart and I really feel sad that this series was finally over because I’m really gonna miss them.

I highly recommend this series if you’re into YA sci-fi filled with lots of adventure, and action.