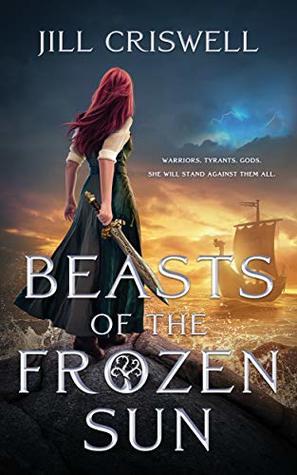 Burn brightly. Love fiercely. For all else is dust.

Every child of Glasnith learns the last words of Aillira, the god-gifted mortal whose doomed love affair sparked a war of gods and men, and Lira of clan Stone knows the story better than most. As a descendant of Aillira and god-gifted in her own right, she has the power to read people’s souls, to see someone’s true essence with only a touch of her hand.
When a golden-haired warrior washes up on the shores of her homeland—one of the fearful marauders from the land of the Frozen Sun—Lira helps the wounded man instead of turning him in. After reading his soul, she realizes Reyker is different than his brethren who attack the coasts of Glasnith. He confides in her that he’s been cursed with what his people call battle-madness, forced to fight for the warlord known as the Dragon, a powerful tyrant determined to reignite the ancient war that Aillira started.
As Lira and Reyker form a bond forbidden by both their clans, the wrath of the Dragon falls upon them and all of Glasnith, and Lira finds herself facing the same tragic fate as her ancestor. The battle for Lira’s life, for Reyker’s soul, and for their peoples’ freedom has only just begun …

Beasts Of The Frozen is the first installment in the Frozen Sun saga. It was a unique read with enemies to lovers trope.  After reading many positive reviews about it, I finally decided to give it a shot and I wasn’t disappointed. This book was a hidden gem and I wish more people gave it a chance. I really loved the characters, and the world the author has built. I enjoyed every minute of it.

Lira is a pretty likable character. She’s the descendant of the god gifted mortal Ailira and has a special ability to read people’s souls. I admired her strength and bravery. She always stood strong despite her uncle and father’s dominance over her. When an enemy washes ashore on her island, she didn’t kill him or handed him over to her clan. She took care of him and taught their language to him. I quite enjoyed the forbidden relationship between Lira and Reyker. It was well developed. Despite their language barrier, they slowly fall for each other. Reyker is a complex and flawed character who’s killed many people including innocents during his battle madness. I like troubled soul characters and I really enjoyed Reyker’s character. I also liked Lira’s childhood best friend who’s there for her when she needed help. The villain was ruthless and he wouldn’t stop until he gets the power of Lira.

The plot was engaging throughout. I loved the forbidden romance, the friendship, the magic, the action, and the gods mythology. There’s not even a single dull moment in the plot. From the start to the end, it was an addicting read. I enjoyed the twists even though some of them were predictable. I liked the magical aspect. The writing was good and I’m glad that we get dual pov’s. The world building was nicely done. It’s not too complex and I really liked the historical setting with vikings vibes and clan wars. I’m actually a fan of this type of settings and I look forward to explore more of this world.

Overall, I loved this book! It was a pleasant read. There’s no huge cliffhanger at the end but I’m still desperate to know what happens next.

I would highly recommend this book if you like YA fantasy reads with Forbidden romance, and Viking mythology.