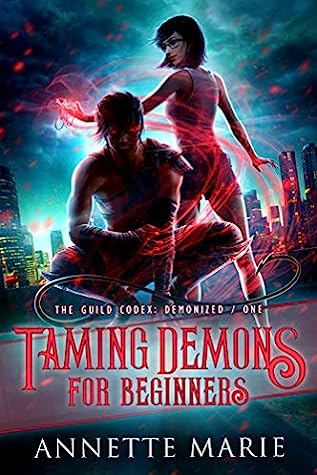 Rule one: Don’t look at the demon.

When I arrived at my uncle’s house, I expected my relatives to be like me—outcast sorcerers who don’t practice magic. I was right about the sorcery, but wrong about everything else.

My uncle chose a far deadlier power. He calls creatures of darkness into our world, binds them into service contracts, and sells them to the highest bidder. And I’m supposed to act like I don’t know how illegal and dangerous it is.

Taming Demons for Beginners is the first book in the Guild Codex demonized series. This was my second series by Annette Marie and once again she didn’t disappoint me. I enjoyed this book even more than I had expected. It’s been a while since I’ve read a Urban Fantasy and I thoroughly enjoyed reading this book. It was an unputdownable read. The main characters were pretty cute and adorable. For me, they’re the best part of this series.

Robin grew up as a normal human being and stayed away from the magic. Both of her parents were sorcerers. She doesn’t know anything about demon summoning or binding. After her parents death, Robin currently lives with her uncle who withheld her inheritance and hidden her mother’s precious heirloom. He calls creatures of darkness into the mortal world, binds them into service contracts, and sells them to the highest bidder. He warns Robin not to interfere with his business and stay away from the basement. When she stumbles upon a demon circle in the basement, she gets intrigued by the shadowy demon who refuses to show himself to her. After Robin’s funny antics, he finally shows himself and reveals his name as Zylas. Despite her uncle’s warnings, Robin makes  constant visits to the basement secretly. She feels bad for him, but she can’t free him either because he’s a demon that can’t be trusted.

I absolutely loved Robin! Her character was so much fun to read. She loves baking and she’s pretty good at it. She isn’t a kickass heroine, but she has a strong heart and an adorable personality that feels very realistic. Zylas is a dark and mysterious demon, and also my favorite character. He isn’t familiar with the human’s world so everything was pretty much new to him. He’s quite addicted to Robin’s cookies and I still can’t believe that he’s a cookie loving demon. It’s one of the cutest part of the story that always brought a smile to my face. The relationship between Robin and Zylas was well developed. I loved their every interaction in the basement and also enjoyed their fun banters. They both come from different worlds and even though there’s a language barrier between them, they somehow managed to communicate with each other. There’s no romantic vibes between them because they’re still understanding each other but I can’t wait to know how their relationship progresses further in the next book.

The plot was very much fun, and entertaining filled with right amount of action, suspense, humor, and magic. I seriously enjoyed every minute of it. The pace was just perfect. I flew through the pages and before I knew it, I’ve finished the book. The author’s writing was engaging and addicting. I quite enjoyed reading the story from Robin’s perspective. The world building was nicely done. It’s a fascinating world that has demons, guilds, and sorcerers.

Overall, I absolutely loved this book! It’s just the start of the series and the ending left me wanting for more. I can’t wait to know what the author has in store for us next.

I highly recommend this book if you’re looking for a good YA urban fantasy series filled with action, humor, and magic. Trust me, you won’t regret it!