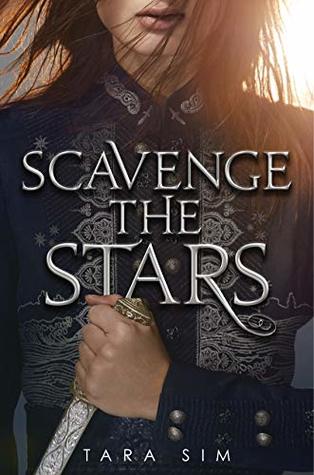 When Amaya rescues a mysterious stranger from drowning, she fears her rash actions have earned her a longer sentence on the debtor ship where she’s been held captive for years. Instead, the man she saved offers her unimaginable riches and a new identity, setting Amaya on a perilous course through the coastal city-state of Moray, where old-world opulence and desperate gamblers collide.

Amaya wants one thing: revenge against the man who ruined her family and stole the life she once had. But the more entangled she becomes in this game of deception—and as her path intertwines with the son of the man she’s plotting to bring down—the more she uncovers about the truth of her past. And the more she realizes she must trust no one…

I’ve never read a Tara Sim’s book but I’ve heard great things about her Timekeeper series. Scavenge the Stars was the first installment in her new YA fantasy series. When I first saw this book, I was really intrigued. It has an attractive cover but its synopsis is what caught my interest. It’s a gender swapped retelling the Count of Monte Christo and I’m a great fan of gender benders. So did I liked it? Yes, but I still had issues that made me not fully loving it.

Amaya was sold to a debtor ship when she was very young. She was given a new name called Silverfish. She couldn’t go back to her home until she payed her father’s debt by working on the ship. Every kid who’re sold just like her are struggled to survive while facing abuse from the ship’s captain. For seven years, Amaya has been away from her mother, and after so long, she’s excited to finally go back home. During their journey to the coastal city of Moray, Amaya rescues a young rich man from drowning who later promises her that he would help her take revenge on the people who ruined her family by giving her a new identity. Caro is the son of a rich merchant who used to pass time on gambling and drinking. But everything changes after a ship wreckage where they lose most of their finances and can’t even afford medicine for his sister’s illness. When Amaya and Caro’s paths collide they get intrigued with each other. While spending time together they both find kinship in each other. When old secrets are finally revealed, Amaya is torn between her feelings for the enemy’s son, and her revenge.

Amaya chandra is a fierce heroine with a strong determination. She loves being free, and diving into the sea and collecting pearls. Even after facing so much abuse, she stood strong and didn’t break. I quite enjoyed her character development. Caro Mercado is a rich spoiled brat who didn’t know anything about hardship.  Even though he’s quite a disappointment to his father, he’s very much talented in scatterjack. He has a gambling addiction, but after their downfall he avoided going to the gambling dens. I honestly felt sympathetic towards Caro’s situation. In desperation, he does so many mistakes which lands him in a huge trouble. I wouldn’t say he was my favorite guy but I did enjoyed his character development. The relationship between Amaya and Caro was sweet. It’s nearly a insta-romance but It’s not too cringy. The secondary characters were okay, but sadly they weren’t memorable enough to describe.

The plot was interesting with a diverse cast, but I found the pace pretty slow. There’s not much action in the book which is one of the major downfall for me. Yeah, I liked the interactions between Amaya and caro, but I wanted more. Some of the twists were predictable, and with nothing much happening I started to lose my interest. The characters were the only thing that made me continue till the end. The author’s writing was engaging. The book was written in dual POV’s. The world building was decent enough. I really liked the historical setting.

Overall, I liked it but didn’t love it. Despite my issues, I’m still going to continue the series and I hope the sequel is much better than this one.

If you want to read it then definitely give it a shot, but I strongly suggest you to lower your expectations before jumping into it.