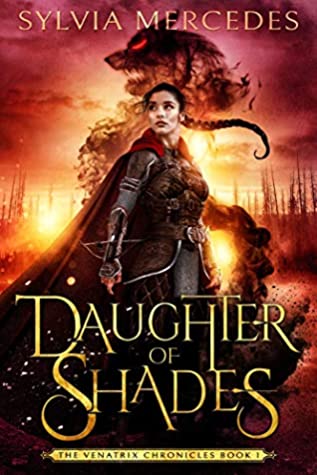 A huntress with no past. A rival with a secret.
A kingdom’s fate hangs in the balance . . .

Ayleth and her shade move as one, ever hungry for the hunt. Under her mentor’s tight control, she fears her memories are being stolen. Now nineteen, apprenticed for as long as she can remember to the mysterious Holy Order, she longs to rise in the ranks and banish untamed spirits for the prophesied Golden Prince.

When shadowy threats descend on the crown, Ayleth seizes a once-in-a-lifetime opportunity to prove her worth in open competition. Seeking to win the prince’s favor and escape her scheming mentor, she resolves to hold her own against Terryn, a handsome, arrogant opponent who may be more than a match for her untested powers.

But as the two rivals follow a trail beyond the Great Barrier and confront legendary evil, the stolen secrets of Ayleth’s past may return to haunt her . . .

Can Ayleth win the trial and reclaim her true self? Can she even survive her first day?

Daughter Of Shades is the first book in The Venatrix chronicles and also the author’s debut novel. That kickass cover and the intriguing synopsis is definitely what drew me to this book. I honestly can’t resist anything that says kick-butt heroines, and slow burn romance. Well, this was surprisingly good for a debut, and I quite enjoyed the main character, the world and the magical system.

Ayleth is a fierce heroine with some major kick-butt skills. She has a feral shade named Laranta who looks like a wolf. I quite enjoyed the bond and the trust between them.  Unlike other venators, she never puts her shade on leash even though it was against the High Order rules because an uncontrolled shade can easily take control over the host’s body. She’s pretty fun, smart, and rebellious. I absolutely loved her. Terryn is a character with a cold and broody personality. I like complex heroes who’re hard on the outside and soft on the inside, and Terryn totally fits the bill. Ayleth and Terryn can’t stand each other but they had to work together to complete their mission given by the Prophesied Golden Prince aka Prince Gerard. I liked Prince Gerard. The author didn’t give much focus to him but so far I like him. He’s not too complex like Terryn but it looks like he’s haunted by his past. We don’t get much details in this book but we might in the next one.

The plot was engaging filled with mystery, magic, action, and adventure. It was a bit confusing at the beginning, but things finally started to make sense in the second half. There are lots of twists and turns. There isn’t any romance yet because it’s a very much a slow burn one and our characters still don’t trust each other, but we do have some fun kissy scenes. The pace was good. The writing was easy to understand. The book was written in third person pov. The world building was unique. Even though it took some time for me to grasp everything, I really enjoyed it. There are shades, ghouls, witches, and spirits. The magical system, and the concept of shades and venators was interesting. I’d love to know more about them.

Overall, I enjoyed this book! It was a good start to a new series! There aren’t many reveals in it because it’s a first book, but I hope we get some answers in the next one.

I would definitely recommend it if you’re looking for an entertaining YA fantasy with a strong heroine with fun personality, a broody hero with a cold attitude, and a world filled with intriguing magic.