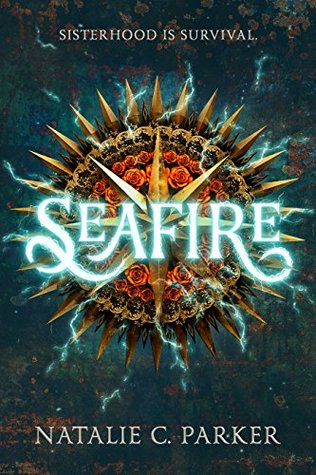 After her family is killed by corrupt warlord Aric Athair and his bloodthirsty army of Bullets, Caledonia Styx is left to chart her own course on the dangerous and deadly seas. She captains her ship, the Mors Navis, with a crew of girls and women just like her, who have lost their families and homes because of Aric and his men. The crew has one mission: stay alive, and take down Aric’s armed and armored fleet.

But when Caledonia’s best friend and second-in-command barely survives an attack thanks to help from a Bullet looking to defect, Caledonia finds herself questioning whether to let him join their crew. Is this boy the key to taking down Aric Athair once and for all . . . or will he threaten everything the women of the Mors Navis have worked for?

When it comes to YA fantasy sea adventure and pirates is one of my favorite combination. I was pretty excited when I first heard about Seafire and I really had high expectations for it. Sadly, this didn’t meet my full expectations but it wasn’t a total disappointment either. Even though I didn’t completely fall in love with it, there are some elements in this book that I really enjoyed such as the female pirate crew, the sea battles, the adventure, and the sisterhood.

The story follows Caledonia Styx whose whole family was killed by the corrupt warlord Aric Athair and his blood  thirsty army of Bullets because of her one single  mistake. Four years later, she has acquired her own crew filled with girls and women who had lost their families by Aric. Their only goal was to defeat Aric Athair by hunting down their army ship by ship. There’s a huge bounty on their heads so they always stay under the radar. When Caledonia’s second in command and best friend Pisces gets captured by the enemy, she was devastated of losing another family member, but luckily Pisces gets saved by a rogue bullet. She doesn’t trust him and she’s totally against boarding him on her ship because she doesn’t want to risk their crew by trusting the enemy, but Pisces forbids her to kill him. When the boy shares a valuable information that can help defeat the warlord, she couldn’t ignore it.

Caledonia is a strong, stubborn, and fierce heroine who’s very much protective of her friends and family. I admired her strength and love for them but she’s pretty shitty when it comes to sharing her burden, secrets, and pain with them. She made some stupid decisions that really annoyed me. Pisces is another kickass character that I really liked. She wasn’t impulsive like Caledonia. She and Caledonia are childhood best-friends and I really enjoyed the friendship between them. They reminded me of Safi and Iseult from Truthwitch by Susan Dennard. I liked Oran’s character. I enjoyed his witty and fun personality. Caledonia was quite rude to him just because he was a bullet. I felt sympathetic towards him. All the bullets were kidnapped from their families when they’re young and they’re brainwashed by some weird drug. Oran never had a choice in his life. Coming to the other crew members of the Mors Navis, I also liked Hime, Amina, Redtooth, and Nettle. They’re all pretty amazing characters.

The plot was interesting, but somehow it failed to impress me. It was mostly a character driven story which mainly focused on sisterhood relationships. From the start to the end, our crew is on the run from the enemies and they don’t engage with the villain until the end. I liked the diverse aspect, but if you’re expecting some LGBTQ relationships in this book, then you might be a little disappointed because the author didn’t focus much on the romance part. Some of the twists were predictable. The romance was okay but the chemistry between the characters was lacking. There’s a lot of hate between them especially from Cal’s side, but suddenly they’re in love with each other. I predicted Oran’s side because there’re some hints given, but there’s nothing from Caledonia side except for hate. For the most part, she saw him as her enemy. The only redeeming part of this book was the sisterhood aspect and the sea battles. The author’s writing was good. I didn’t have any issue with it. The book was written in third person pov. The world building was good. Most of the story was set on the sea. It has this dystopian feel to it like the Water world.

Overall, I enjoyed it. Even though it’s not my favorite, I’m still looking forward to read the next book.

I highly recommend this book if you like YA fantasy that focuses on female friendships and sea adventures.