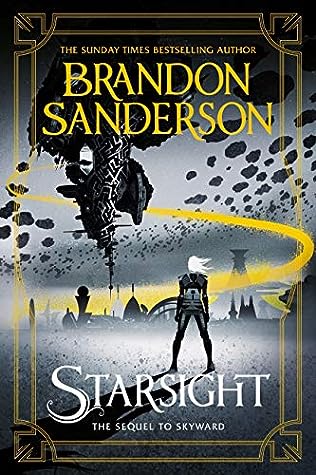 All her life, Spensa has dreamed of becoming a pilot. Of proving she’s a hero like her father. She made it to the sky, but the truths she learned about her father were crushing. The rumors of his cowardice are true–he deserted his flight during battle against the Krell. Worse, though, he turned against his team and attacked them.

Spensa is sure there’s more to the story. And she’s sure that whatever happened to her father in his starship could happen to her. When she made it outside the protective shell of her planet, she heard the stars–and it was terrifying. Everything Spensa has been taught about her world is a lie.

But Spensa also discovered a few other things about herself–and she’ll travel to the end of the galaxy to save humankind if she needs to.

Starsight was an exciting sequel to Skyward. It was full of adventure and action. We meet a new set of characters and I liked all of them especially morriumur. The only downside was that we didn’t get more of the skyward flight team in this book. I really missed their banters. Nonetheless, this was still a total entertainer.

Spensa has finally succeeded in becoming the pilot and she learns that her father did deserted his team and turned against them. While searching for answers, Spensa discovers some shocking secrets about herself and the krell’s next major plan. To fight against them, their only hope is the Hyperdrive technology which is only limited to Krell. In order to steal their technology, Spensa uses her cytonic ability to infiltrate into the Krell society. The fate of humankind now rests on her shoulders and failing this mission means the end of them.

Spensa is such a fun character. Her character growth was the best. I always enjoy her interaction with M-Bot and Doomslug. The bond between them was one of my favorite parts in this series. I loved Spensa’s new squad team. Hesho was hilarious. He’s a kitsen who looked like a tiny little fox. I also liked Morriumur and the invisible member named Vapor. Sadly, the old skyward team didn’t get much page time in this book. I hated Brade! She’s my least favorite character in this book. I’m very curious about the real Alanik and would love to know more about her.

The plot was interesting, but it was a little slower than the first book. The action and adventure was perfectly executed though. There are so many reveals and the part about Doomslug really surprised me. The author’s writing was vivid and descriptive. The book was mostly written in Spensa’s POV but we also get a few chapters that gives us a glimpse on what’s really happening in the Detritus while spensa is on the other side of the galaxy spying on krell. The world building was amazing. I’m glad we get to explore more of this world and meet different races of aliens from all over the galaxy.

Overall, I enjoyed reading this book! The ending was pretty intense and the author concluded it with a huge cliffhanger. I’m dying to know what really happened to one of my favorite character.

I highly recommend this series if you’re looking for YA sci-fi read filled with adventure and action.