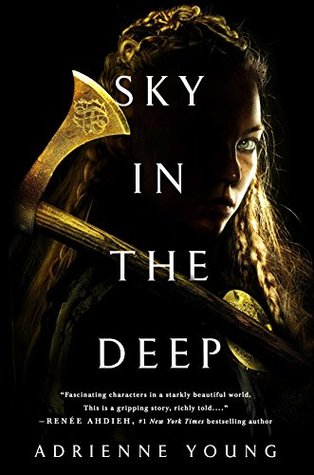 Raised to be a warrior, seventeen-year-old Eelyn fights alongside her Aska clansmen in an ancient, rivalry against the Riki clan. Her life is brutal but simple: fight and survive. Until the day she sees the impossible on the battlefield—her brother, fighting with the enemy—the brother she watched die five years ago.

Faced with her brother’s betrayal, she must survive the winter in the mountains with the Riki, in a village where every neighbor is an enemy, every battle scar possibly one she delivered. But when the Riki village is raided by a ruthless clan thought to be a legend, Eelyn is even more desperate to get back to her beloved family.

She is given no choice but to trust Fiske, her brother’s friend, who sees her as a threat. They must do the impossible: unite the clans to fight together, or risk being slaughtered one by one. Driven by a love for her clan and her growing love for Fiske, Eelyn must confront her own definition of loyalty and family while daring to put her faith in the people she’s spent her life hating.

“We find things, just as we lose things. If you’ve lost your honor, you’ll find it again.”

This book has been on my TBR for nearly a year and I’m glad that I finally picked it up. The mixed reviews made me a bit worried because I really don’t want this to be a disappointment. Thankfully, it met my expectations. I loved the vikings action,  the lore, the emotional bondings, and the forbidden enemies to lovers romance. It’s mostly a character driven story so don’t expect it to be a  fully action packed read.

Seventeen year old Eelyn lived her entire life surviving and fighting. Since young she was trained to be a warrior and fought alongside her Aska clansmen against her rival Riki clan. She’s still mourning for her dead brother who died five years ago and when she finds him fighting on the enemies side, Eelyn can’t believe her eyes. To find answers, she follows him and gets attacked by his friend Fiske who later kidnaps her. He doesn’t trust her, but for some reason he still keeps her alive. When Eelyn gets to the enemy camp, she realizes that they’re also struggling to live. But when the Riki village is raided by a ruthless clan thought to be a legend, Eelyn is even more desperate to get back to her beloved family. To survive this dangerous threat, Eelyn must unite both of their clans which is an impossible task.

I absolutely loved the main character Eelyn. She was brave, fierce, ruthless, and totally kickass. She grew up hating the Riki clan and she’s very loyal to her people. I really enjoyed her character growth. If you love broody heroes then you’ll love Fiske. He’s very protective of his family. Even though Eelyn was his enemy and a threat to his family, he never intentionally abused her. The slow burn romance between them was one of the best things I loved in this book. I also loved the sibling relationship between Eelyn and Iri. She hates him for being the traitor, but she still loves him. The secondary characters were nice especially Halvard, Fiske’s younger brother. He stole my heart with his cuteness and innocence.

The plot was engaging and emotional. Even though it was a predictable read, I quite enjoyed the way the author executed the story. The pacing was good. The first half might seem a bit slow to some readers because it mostly focused on the characters and their relationships which I really enjoyed. The author’s writing was captivating. The book was written in Eelyn’s POV. The world building was perfect and I really liked the mythology aspect especially the feuds between the gods.

Overall, it was a great debut! It was a story filled with friendship, family, and love. The ending was pretty satisfying. I’ll definitely look forward to the author’s next work.

If you like Character driven Stories, and Enemies to lovers trope then this book is just for you.