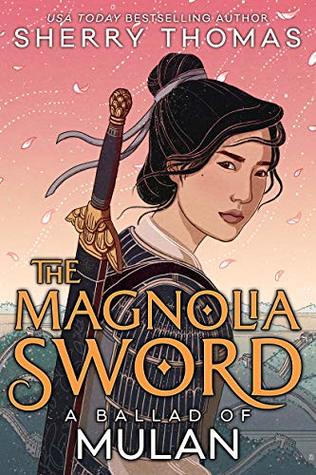 A Warrior in Disguise

All her life, Mulan has trained for one purpose: to win the duel that every generation in her family must fight. If she prevails, she can reunite a pair of priceless heirloom swords separated decades earlier, and avenge her father, who was paralyzed in his own duel.
Then a messenger from the Emperor arrives, demanding that all families send one soldier to fight the Rouran invaders in the north. Mulan’s father cannot go. Her brother is just a child. So she ties up her hair, takes up her sword, and joins the army as a man.

A War for a Dynasty

Thanks to her martial arts skills, Mulan is chosen for an elite team under the command of the princeling—the royal duke’s son, who is also the handsomest man she’s ever seen. But the princeling has secrets of his own, which explode into Mulan’s life and shake up everything she knows. As they cross the Great Wall to face the enemy beyond, Mulan and the princeling must find a way to unwind their past, unmask a traitor, and uncover the plans for the Rouran invasion . . . before it’s too late.

“I am not JUST a girl – no woman is. And if Heaven has deposited me at this time and place, then I AM meant to deal with these problems, no matter their scale of consequence.”

I’m a sucker for Mulan retellings and this one was a great read. I’ve never read a Sherry Thomas book, but I really wanted to give it a shot. Although it was a bit slower than I had expected, I quite enjoyed the story and the main character. The world building was amazing 😍 and I loved the writing style of the author. It was so good. The pretty cover with the cherry blossoms background was just perfect. I don’t know why this book was so underrated.

The story follows Nineteen year old Hua Mulan who has spent her whole life disguising herself as her dead brother. Since young she was trained to fight a duel that every generation in her family must fight so that she could re-unite two heirloom swords Heart Sea and Sky Blade, which were separated decades ago. Mulan’s family owns Heart Sea and her rival family owns Sky Blade. In order to get the Sky Blade, Mulan must beat the rival family’s youngest son named Kai. Unfortunately, their fight gets cancelled when a  royal messenger arrives demanding that all families send one soldier to fight the Rouran invaders in the north. From her family, Mulan decides to go by disguising herself as a man because her disabled father, and little brother can’t go. Thanks to her martial arts skill, she gets the attention of the royal duke’s son and gets recruited in his elite team. During her journey, Mulan must keep her identity a secret, but it looks like she wasn’t the only one with secrets.

Hua Mulan is a woman with a warrior’s heart and a strong determination. She’ll do anything to protect her family. Even though she’s skilled in martial arts, she wasn’t perfect because she had never been in a real combat. Her character growth was well done. Coming to the secondary characters, I really liked Kai’s character. His identity was easy to guess in the beginning. You need to read this book, if you want to find out more about him. The prince was smug and arrogant but I still liked  him. The other members of the elite team were pretty fun too.

The plot was engaging filled with adventure, family drama, and action. The pace was good, but it is more on the slower side. The romance in this book is very light, but it was satisfying enough. There were some surprising twists especially that betrayal. It was so unpredictable. Besides the intense fight scenes with the Northerners, I also enjoyed the family drama between Mulan and Kai’s family. The author’s writing was compelling. The whole book was written in Mulan’s first person POV. The world building was superb. I really enjoyed the historical setting, the food, and the culture, everything seemed very accurate.

Overall, I loved it! The ending was just perfect. Although It was a retelling, it still maintains its originality.

I highly recommend this book if you love to read Mulan retellings!

12 thoughts on “The Magnolia Sword: A Ballad of Mulan By Sherry Thomas [Review]”