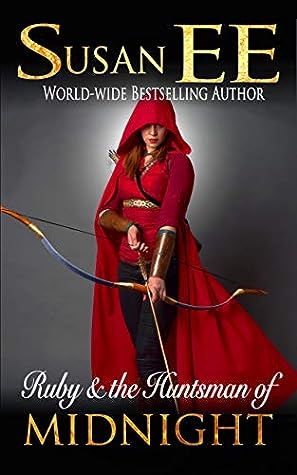 A monster hunter in a castle. Werewolves in a dark forest. And a young woman trapped between the two.

Ruby will do anything to escape the infamous dungeons of Midnight Castle. She dares to dream of reaching the safety of her grandmother’s house. But in order to get there, she’ll need to outrun hunters and monsters alike through the deadly forest.

As the Dark King’s Huntsman, Tyler will do whatever it takes to complete his mission, even if it means using an innocent girl as prey for the savage creatures he hunts.

In the dark and twisted Kingdom of Midnight, an unnatural howling fills the night…

Ruby and the Huntsman of Midnight is a stand-alone novel that can be enjoyed by readers new to the world of Midnight Tales.

Ruby and The Huntsman is the second stand-alone installment in the Midnight Tales series. The first book which was a dark Cinderella retelling was a huge disappoint for me. I pretty much lowered my expectations before getting into this one. The book was set in the same world, but the characters were different. It was a unique take on the Red Riding Hood and it features Silver’s(from the first book) granddaughter Ruby.

Ruby was a prisoner in the Dark Kings castle. She was kept in the dungeons along with the other prisoners. When a rabid howler was sent into her cell, surprisingly she survives, but the howler is dead. When Huntsman meets Ruby, he can’t believe that she killed a huge howler, a wolf like monster. He recruits her into his team and trains her. He wants to use Ruby as a bait for the wolfkin, so that he could hunt them down. As the Dark King’s Huntsman, Tyler will do whatever it takes to complete his mission because the consequences would be his death because the Dark King never gives a second chance.

Ruby was a heroine with strong determination. She’ll do anything to escape her prison. When the Huntsman offers her a deal, she couldn’t say no because it’s the only chance for her freedom. She doesn’t trust him, but she really likes to prove herself strong. Huntsman aka Tyler was a broody guy with cold personality. The only one close to being his friend was his dog named Shadow. He trains Ruby very hard and he often scolds her when she makes mistakes. This guy is so infuriating, but I can understand his desperation. The romance in this book is very light.  The relationship between Ruby and Huntsman is pretty much a slow burn. I wish there was more interactions between them. The secondary characters were just okay, they’re not memorable enough to describe.

The plot was interesting but don’t expect for anything extraordinary. It’s pretty much a fast read and you might find some parts rushed. While some of the twists were predictable, some of them were hard to guess. I enjoyed the team up of Shadow and Ruby. Together they’re pretty awesome. The ending was a little rushed. It would’ve been great if the author slowed down a bit. The writing was okay. The book was told in dual POV’s. The world building was good, but I wish there was more details. I’m already familiar with it so it’s easier to grasp everything.

Overall, I liked it! I can’t say it was the best, but it was definitely much better than the first one. I’ll look forward to the next book.

I recommend this book if you’re into fairy-tale retellings!

So, What do you think of this books? Have you read it yet? Do you Plan to read it?
Please feel free to comment below!