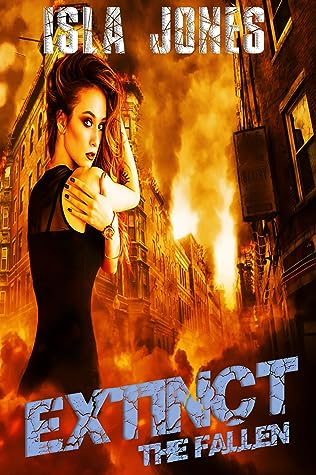 Quinn watched her group fall to the Others one by one.
Now, she’s ready to turn her back on the horrors of the First Cull and forget all about Darce, the Other who invaded her closest companion … the parasite who made her feel. But moving on from the First Cull can’t happen while the Others are taking over cities with their glittery domes, and invading every viable human host they can find.
Quinn doesn’t care that the Others can’t invade her, that her body isn’t a suitable host for the parasites. She cares only about her medication and survival.
Only, when she finally gets to the quarantine post, Quinn realizes that those two small wishes have never been further out of reach.

The Second Cull might just be happening within the very walls that were promised to be safe, and a familiar parasite takes an interest in her.

*eARC Received from the author in exchange for an honest review*

Extinct was a thrilling sequel to Endangered. The first book left me wanting for more. I jumped into this as soon as I got my hands on it. It’s a pretty short read and I devoured it in less than an hour. I’m sad it was finally over but it was a satisfying conclusion even though the ending broke my heart.

The story continues from where it was left off in the first book. After the first cull, Quinn escapes from Darce, the other who invaded her companion and deceived her into trusting him. She thought she was safe in the Quarantine post, but when things starts to look suspicious, Quinn fears that it might not be a safe haven but without her medication she wouldn’t survive long. When she meets her old enemy in the Quarantine, she doesn’t know whom to trust.

Quinn really surprised me in this book. She becomes irrational and violent in the Quarantine and her desperation for the pill makes her brave enough to seduce a parasite. She was a bit insane in this book, but I still enjoyed her character. She gets closed off from the other survivors, and she’s the only one who doesn’t blindly follow orders. As expected, Darce does make an appearance in the Quarantine. Unlike other parasites or OTHERS, he genuinely cares for Quinn. I enjoyed their every conversation, and I really wanted to know what is going on in his mind.

The plot was engaging throughout. It kept me hooked from the first line till the end. The pace was fast and there’s never a dull moment. It was a short story, but I didn’t want it to end. I wish the last part wasn’t rushed. This  story had the fifth wave vibes and some of the twists were easy to predict. The ending was unpredictable though. I didn’t see that coming. The writing was simple and easy to understand. The book was written in Quinn’s POV, but I wish we also got Darce’s POV. There’s not much world building, but I liked the whole Quarantine setting.

Overall, I really liked it! Even though the ending made me sad, I had a good time reading it.

If you’re looking for a quick YA sci-fi read with alien invasion and survival themes.