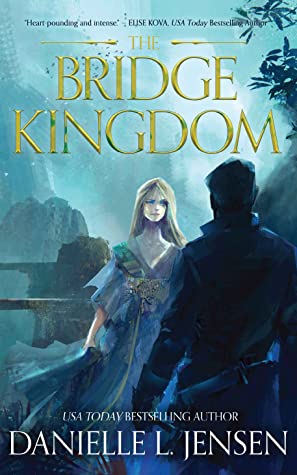 Lara has only one thought for her husband on their wedding day: I will bring your kingdom to its knees. A princess trained from childhood to be a lethal spy, Lara knows that the Bridge Kingdom represents both legendary evil – and legendary promise. The only route through a storm-ravaged world, the Bridge Kingdom controls all trade and travel between lands, allowing its ruler to enrich himself and deprive his enemies, including Lara’s homeland. So when she is sent as a bride under the guise of fulfilling a treaty of peace, Lara is prepared to do whatever it takes to fracture the defenses of the impenetrable Bridge Kingdom.

But as she infiltrates her new home – a lush paradise surrounded by tempest seas – and comes to know her new husband, Aren, Lara begins to question where the true evil resides. Around her, she sees a kingdom fighting for survival, and in Aren, a man fiercely protective of his people. As her mission drives her to deeper understanding of the fight to possess the bridge, Lara finds the simmering attraction between her and Aren impossible to ignore.

Her goal nearly within reach, Lara will have to decide her own fate: Will she be the destroyer of a king or the savior of her people?

The bridge Kingdom is the first book in Danielle L. Jensen’s new NA fantasy romance duology. I haven’t finished the author’s Malediction trilogy but I really liked her recent work titled Dark Shores. When I heard she was releasing another book with enemies to lovers trope, I couldn’t resist. This book isn’t something that will blow your mind away, but it sure was an entertaining read. I liked both the characters in the book. The romance was great, the world building was unique, and the plot was decent enough.

Twenty year old Lara is one of the twelve daughters of the ruthless king of Maridrina. Since childhood she along with her other sisters were trained to become a lethal Spy. When the king of the bridge kingdom asks King of Maridrina his daughter’s hand in marriage to fulfill the peace treaty between them, the king chooses Lara. She’s going to be married to the enemy, but she isn’t going to be a loyal and obedient wife. She’s there to spy on their enemy and find the ways to infiltrate the bride Kingdom.  Lara hates her new husband Aren, but she admires him for being so protective of his people. When she gets to know more about the people living in the Bridge Kingdom who’re also struggling to survive, Lara feels guilty about destroying them and her new feelings for Aren isn’t helping things, but in order to save her people from starvation, Lara has to finish the mission.

Lara is a strong heroine who’s fierce, smart, and cunning. At the beginning, I wasn’t really great fan of her, but as the story progressed, I started to like her. She’s totally a kickass character and I can’t wait to see her in action in the sequel. Aren is definitely a swoon worthy character. He’s quite arrogant towards Lara but he is very protective of his kingdom and he’ll do anything to save his people. Even though he doesn’t fully trust Lara, he still respects her. The romance between Lara and Aren was a slow burn. If you like angsty romances, then you’ll love this one. Although the secondary characters weren’t that much interesting, I still enjoyed them.

The plot was entertaining but I wouldn’t say it was an unpredictable plot.  Some of the things were quite easy to predict especially the ending. However, I’m still excited to read the next book. The pace was good. It’s not a fast paced read. The plot mostly focused on scheming, politics, spying, and romance. The action was good, but don’t expect too much in this book. The author’s writing was engaging enough. The book was written in third person dual POVs. The world building was very unique and fascinating especially the mysterious bridge kingdom, the entire setting was beautiful and lush.

Overall, this was a good read filled with romance, politics, and intrigue. The book finally ends with a cliffhanger which I already saw coming from the start but still I can’t wait to know what happens next. I’m hoping there’s more action in the second book.

I would recommend this book if you love enemies to lovers trope!!!