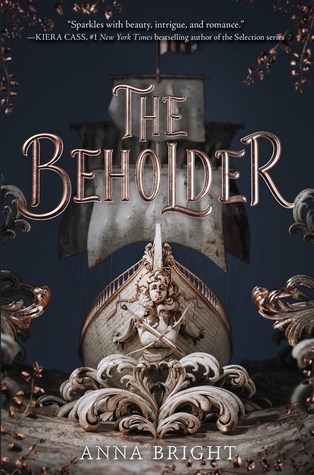 Selah has waited her whole life for a happily ever after. As the only daughter of the leader of Potomac, she knows her duty is to find the perfect match, a partner who will help secure the future of her people. Now that day has finally come.

But after an excruciatingly public rejection from her closest childhood friend, Selah’s stepmother suggests an unthinkable solution: Selah must set sail across the Atlantic, where a series of potential suitors awaits—and if she doesn’t come home engaged, she shouldn’t come home at all.
From English castle gardens to the fjords of Norge, and under the eye of the dreaded Imperiya Yotne, Selah’s quest will be the journey of a lifetime. But her stepmother’s schemes aren’t the only secrets hiding belowdecks…and the stakes of her voyage may be higher than any happy ending.

The Beholder is Anna Bright’s debut YA fantasy novel. This wasn’t really one of my anticipated books but I wanted to give it a shot because I’ve heard good things about it. Well, I think this one’s a decent YA fantasy novel with a unique twist but I wouldn’t say it was flawless. First of all, I had two issues with this book, the first one was the world building, and the second one was the protagonist itself. The plot was entertaining. The whole story is about Selah’s journey to find the suitor to marry by travelling to different countries. Some of the readers said that it was a little bit similar to the selection series which I’ve never read but overall it was an enjoyable read.

The story follows Eighteen year old Selah, the seneschal-elect of Potomac. Her father is the leader of Potomac. Selah and Peter have been friends since they were kids. She dreamed of him being her future husband. On her eighteenth birthday, when her father offers a marriage proposal, Peter rejects the proposal. After the public humiliation, Selah’s step mother Alessandra suggests her that she must find herself a husband by travelling across the sea. Selah was forbidden to come back to her homeland, until she finds herself a husband from among the suitors she chose. Reluctantly, Selah sets sail to meet all the suitors, but she fails to notice her step-mother’s nefarious plans. Selah needs to find herself a suitable husband and return to Potomac before it’s too late.

This is one of those books that you’ll like the side characters more than the main character. I didn’t hate Selah but she was too naive enough to be the leader for her people. I expected her to be more strong. I think she might be a hit or miss for some people. Coming to the secondary characters, I loved all the suitors including Captain Lang. He was a broody and mysterious guy with a hidden agenda. He’s totally my type. In this book we meet two of the three suitors, the first one was the prince of England who was pretty charming. Although he was a bit thorny at the beginning, I quite enjoyed his character. Next we have Nineteen Year Old Prince Torden Asgard Of Norge. He’s the teen version of Thor with Red hair, brown eyes, and muscular physique. He was a bit wild and strong, and doesn’t know how to express his feelings. I found his character pretty cute. And I also liked the trouble maker Aleksei, he’s so Loki. I enjoyed the romance, but It was a bit unrealistic how the heroine switched her feelings from one person to another in few weeks. The whole thing felt like a reverse harem novel.

The plot was entertaining, but be warned that it’s not an action packed novel. It was mostly a slow ride. I enjoyed the unique concept. I really liked the weird mix of the norse mythology and fairy tales in a single storyline.  Although some of the twists were predictable, it was an engaging read throughout. To be honest, the love interests in this book made it more enjoyable. They’re all swoon worthy. I’m currently rooting for the broody captain.  We haven’t met the third suitor the prince of Imperiya yet but I’m very curious about his character. The writing was great. The book was told in Selah’s first person pov. The world building was a bit confusing. It’s an alternate universe of our historical world incorporated with Norse and fairytale world. The whole idea may sound interesting but it didn’t work out for me in this book. I wish the author provided more details about this world.

Despite all these issues, I quite enjoyed reading this book. It’s a fun read filled with adventure, friendship, romance, and intrigue. It isn’t my favorite, but I’m definitely looking forward to the next book in the series.

I recommend this book if you’re looking for an entertaining YA fantasy read but I’d suggest you to lower your expectations before jumping into it.