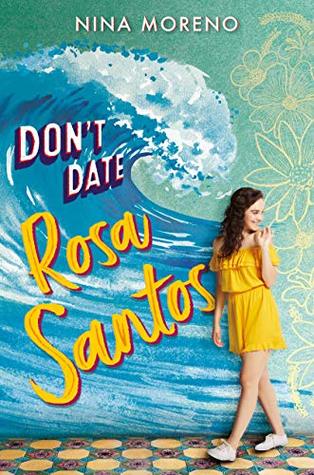 Rosa Santos is cursed by the sea—at least, that’s what they say. Dating her is bad news, especially if you’re a boy with a boat. But Rosa feels more caught than cursed. Caught between cultures and choices. Between her abuela, a beloved healer and pillar of their community, and her mother, an artist who crashes in and out of her life like a hurricane. Between Port Coral, the quirky South Florida town they call home, and Cuba, the island her abuela refuses to talk about.

As her college decision looms, Rosa collides—literally—with Alex Aquino, the mysterious boy with tattoos of the ocean whose family owns the marina. With her heart, her family, and her future on the line, can Rosa break a curse and find her place beyond the horizon?

I honestly thought this would be another fluffy YA romance, but it was definitely not what I had expected. It’s an emotional roller-coaster ride. It’s a journey of a girl who overcomes her family curse and creates her own path. There is a light romance, but it wasn’t really the central focus of the story. This book was all about family relationships and things get a bit dark in the end. It is a perfect summer contemporary read if you’re looking for something that is both light and dark.

The story follows Eighteen year old Rosa Santos, grand daughter of a Cuban immigrant. Dating her is a bad news especially if you’re guy with a boat because it was told that the whole family was cursed by the sea.  I really found Rosa pretty enjoyable. She was fun, stubborn, and a sweet character. Her relationship with her mom and abuela was adorbs. They all have a strong bond with each other. I also liked Alex Aquino and his baking skills. He’s your typical YA love interest with dark eyes and a man-beard. I expected him to be one of the main characters but he was more of a secondary character who appeared whenever needed. Rosa’s mom wasn’t really a perfect mother but she does cares for her daughter. I loved Rosa’s abuela Doña Santos aka Mimi. She’s a healer who’s very skilled in making herbal potions. Her past was tragic and I felt sad for her. I also liked Rosa’s sassy friend Ana Maria.

This book has a decent storyline filled with grief, family secrets, drama, and love. It’s a story about the Santos Women. I might’ve enjoyed it a bit more if it was focused more on the curse part too.  The family dynamic was pretty good. I liked the LGBTQ rep in the book. I found the pacing a bit slow, things get intense only at the end. The food mentioned in the book was drool worthy, so be warned. The romance between Rosa and Alex was pretty sweet.  I was slightly disappointed that we didn’t get more of them together in the book. The writing was great. The book was told in Rosa’s first person POV. The world building was good. The story was was set in Florida in a fictional town named Port Coral. The magical vibes and the cuban culture was a nice addition to the plot.

Overall, I liked this book! It was a heartfelt and Coming of age story. I wouldn’t say it was my favorite read, but I did enjoyed the overall story. Although the ending was a bit heartbreaking and sad, I think it was a good conclusion.

I recommend this book if you’re looking for a refreshing and a diverse YA standalone read that deals with grief, family secrets, and lots of culture.