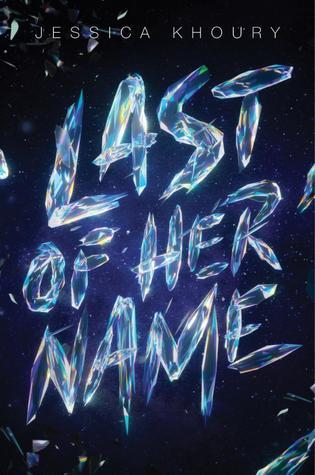 Sixteen years ago, rebellion swept the galaxy known as the Belt of Jewels. Every member of the royal family was murdered–down to their youngest child, Princess Anya–and the Union government rose in its place. But Stacia doesn’t think much about politics. She spends her days half-wild, rambling her father’s vineyard with her closest friends, Clio and Pol.

That all changes the day a Union ship appears in town, carrying the leader of the Belt himself, the Direktor Eminent. The Direktor claims that Princess Anya is alive, and that Stacia’s sleepy village is a den of empire loyalists, intent on hiding her. When Stacia is identified as the lost princess, her provincial home explodes into a nightmare.

Pol smuggles her away to a hidden escape ship in the chaos, leaving Clio in the hands of the Union. With everything she knows threading away into stars, Stacia sets her heart on a single mission. She will find and rescue Clio, even with the whole galaxy on her trail.

Jessica Khoury’s debut novel The forbidden Wish was one of my favorite reads but her latest stand-alone YA sci-fi novel ended up as a disappointment for me. Last Of Her name felt very much different from her debut novel. It was a Anastasia retelling set in space.  I was expecting a fun filled adventurous ride with a swoon worthy romance but this one turns out to be a slow ride. The plot wasn’t exciting enough and the romance was underwhelming. The characters were okay-ish. The only best thing I loved about this book was the world-building which deserves all the stars.

Sixteen year old Stacia of Afka likes adventure running around wild with her friends Clio and Pol, but suddenly her whole turns upside down when a Union Ship arrives in their town taking prisoners. The Galactic Union’s Leader Alexei Volkov aka The direktor who killed the entire royal family of Alexandrine claims that he’s looking for the young heir Princess Anya who somehow escaped the massacre. Later Stacia discovers that she’s the Princess Anya and her whole village have hid the truth from her. When Chaos erupts, Pol smuggles her away from her home and sets on a journey to the resistance group, the faithful followers of the Alexandrian empire. After nearly escaping from death, Stacia can’t help but think about her best friend Clio who she left behind in the hands of the ruthless Union leader. Despite everyone’s wishes, Stacia plans to rescue her friend.

Stacia character felt like a typical sixteen year old YA heroine. She’s a strong, reckless, and stubborn teenager who’ll do anything to save her loved ones. I really don’t hate her but some of her reckless actions really annoyed me. Pol is a loyal friend who’s very protective of Stacia. He’s hybrid child of human and an alien species named Aeyla. His horns are pretty cute. He hides his feelings from Stacia because they can never be together. There’s no build up in the romance so everything seemed forced to me. Clio’s character was a total surprise. I didn’t see that coming! I liked the gravity witch named Riyan from Tyrrha. He’s a tensor who can manipulate gravity enough to crush a human being. He’s the only interesting character in this entire book.

The plot was decent enough but nothing new. It was something that I’ve seen before in many YA books. The only thing that makes it apart from the other books was the prism concept and the world building. I really want to love this book, but it was too slow for my taste. The whole book was running across the galaxy hiding from the enemies. I liked the friendship aspect but the romance was totally meh. There’s no chemistry between the characters. The writing was great. The book was told in first person POV. The world building was amazing! It was the best aspect of this book. I really wish the author explored more deeply into the other planet’s species and their culture. I really liked the prism energy concept! The prisms are a huge power source in this universe. They’re an almost infinite power source, the foundation upon which their entire society was built. In ships, It generates massive amount energy which helps warp faster than the speed of light.

Overall, it was an okay-ish read! It has a promising plot, but some aspects of this book fell flat for me. Despite all the adventure and action, It still failed to impress me.

Although this didn’t work out for me, I wouldn’t say it was a bad read. If you want to try this book then definitely give it a shot but keep your expectations low.

26 thoughts on “Last of Her Name By Jessica Khoury [Review]”