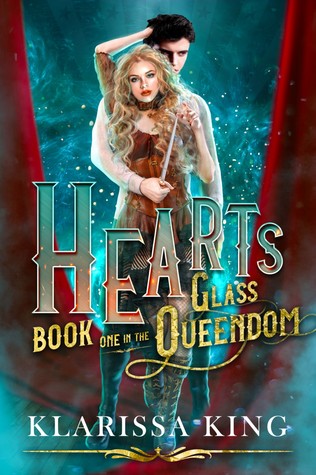 In Spades, there is a game as terrifying as the Sisters of Fate. The Hatterthon.
A game so cruel that its brick-roads run red with blood and in every shadow there are players killing to survive. The mysterious Ringmaster seized the Hatter’s once-delightful game long ago, and branded it with his mark.
The stain of death…

All I ever wanted was a peaceful life. Most other blacksmiths have no trouble holding onto small dreams like mine, and I’ll envy them for it for all my days.
Not only is my village attacked by the Heart-Breakers, in the battle I’m thrown down the Forbidden Well.
I land in the most unimaginable place, a place of true terror and wonder. A deadly game called the Hatterthon.
If I’m ever going to get back home, I have to win this dangerous game, where the brick roads run red with blood and allies are just waiting to plunge a blade into the nearest heart.
I can’t trust anyone here—especially not Night, the definitely wicked ally I picked up along the way.
I’m not sure which is more dangerous: Night, who wears deceit behind the veil of his captivating eyes, or the greatest threat in the game—the Ringmaster. All I know is, I have to strike down my ally before he turns on me and breaks much more than my bones.
Because only one can win the Hatterthon.
Before I lose myself to the madness…

In Spades, kisses taste like sweets and wine, and only when they end do you taste the poison on your lips.

Hearts is the first in The Glass Queendom duology. It is a dark retelling of Alice In Wonderland. I’m honestly not into wonderland retellings but I still wanted to give this a shot because I’m pretty much sucker for dark fairtytale retellings and anti-heroes. Hearts was an interesting read. It’s a hunger games meets Caraval, and I really liked it. The characters were interesting and the world was enchanting. The only issue I had with this book was getting into this world. In the first half, I was really confused about the Hatterthon game and what’s really happening, but in the end I was left wanting for more.

Nineteen Year Old Shoshanna Rose is a blacksmith from Crooked Grove who makes weapons and without her glasses she can’t see clearly. When the rebel heartbreakers create chaos during annual auditions of the tournament of hearts, she falls into the forbidden well and ends up in the Hatterthon Game. In order to get back to her home, Rose needs to play the game and thankfully she gets help from the mysterious Night  who claims that he’s neither her friend nor her enemy. When the Hatterthon starts to take a brutal and bloody turn, Rose doesn’t know whom to trust but she had to make it out alive before she loses herself to the madness.

I really liked Shoshanna Rose! She’s strong, caring, and a stubborn character. She had some kind of dark past which made her into a tough girl. She doesn’t trust people easily but she can’t help getting attracted to Night who’s a trouble with a capital T. He makes her heart flutter but she can’t trust him either. Night is a mysterious character who harbors many secrets. He was charming yet dangerous. I really missed him when Rose and Night parted ways in the middle. It’s one of the things I didn’t liked. The chemistry between them was sizzling. I loved their every interaction. I hope there’s more romance in the next book. Their relationship reminded me so much of Dante and Tella from Caraval Trilogy. As for the secondary characters, I didn’t care much about Rose adopted brother Lock, but the jester named Paris was very intriguing. I hope we get to meet him once again. The Hatter was mad but at the same time sweet and fun. And last but not the least, we have Chester, the wicked cat. He was pretty funny and never failed to bring a smile on my face. I really loved his character.

The plot was dark, interesting, and twisted, but It took some time for me understand everything. Some parts were predictable but it didn’t hinder my enjoyment. I really loved the concept of Hatterthon and how everything was connected. The plot slowed down in few scenes but overall the pacing was good. The writing was great. The story was written in Shoshanna’s pov. The world building was absolutely wonderful. I really loved the Kingdom of Hearts, and Spades. It was captivating, dark, magical, and brutal. I can’t wait to explore more of this world.

Overall, it was a fun read! Despite issues, I found this very enjoyable and I’m excited  to know what happens next. I want more Night and Rose!!!

I recommend this book if you like dark twisted fairytale retellings!