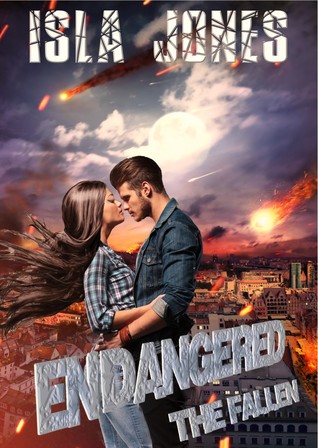 Quinn is trapped in deadlock traffic when it happens. Planes fall out of the sky, a meteorite hits the harbour, and the city is taken by waves of toxic water.Seizures sweep the highway before they show themselves—the others.
Quinn doesn’t care why they have come, or what they want from earth. She is just trying to survive the First Cull with the guy who saved her life.

Together, Quinn and Darce search for any way out of the doomed city, while avoiding the Others at every turn. But their journey won’t be easy when the Others can invade any living host, and your closest ally might just become your greatest enemy. The fate of those who survived the First Cull hangs in the balance of trust and partnership, but when Quinn’s cold heart begins to thaw, the last of humanity faces extinction.And she has her own demons to fight.

Endangered is an apocalyptic alien invasion story set in Sydney, and is the first in the two-part series, The Fallen.

* eARC received from the author in exchange for an honest review, this does not affect my opinion of the book or the content of my review *

I love Alien invasion stories, when the author asked me if I want to review this book, I really didn’t even think twice before accepting it because I loved her previous works. Well, this book was a delight to read! It has some fifth wave vibes and I immensely enjoyed reading it. The plot, the setting, and the characters were incredible. My only issue with this book was that it was too short. I wish it was a bit longer because I wanted more of it. I loved the main characters Quinn and Darce. They’re amazing! The author did a great job in writing this book. I finished it in one sitting!

Quinn is struggling with anxiety and because of her issues, she had no social life and was left with few friends who’re close to giving up on her. Soon her entire world turns upside down, when their world is invaded by the others. Planes fall out of the sky, a meteorite hits the harbour, and the city is taken by waves of toxic water. The world that she knew is no more. All the communication satellites, and the electricity were shut off, people begin to die in mysterious way. During the first cull, Quinn surprisingly makes it out alive with the help of a stranger named Darce. Together they both try to avoid the others who can invade any living host while struggling to survive.

I enjoyed Quinn’s character! She’s vulnerable yet strong woman. Despite her illness, she always stood strong and fought for her life. Darce’s character is both mysterious and very much intriguing. His secret was easy to guess, but I was still anticipating for the part when Quinn finally figures it out. There’s no romance in this book but there’s something going on between our main characters. Darce was fascinated with Quinn and he was very protective of her. Quinn also starts to like him until she learns about his secret. I want to say more but I don’t want to give away any spoilers.

The plot was very well written! It was engaging, entertaining and thrilling. Although some part of it was predictable, it didn’t lessen my interest. It was a fast paced read with no dull moments throughout. The dark Tar thing might seem a little cringy to some readers but I didn’t hated that aspect because I like gore in my YA books. The writing was good and easy to follow. The book was written In Quinn’s first person POV. The setting was perfect! The author had created a perfect atmosphere filled with chaos and danger.

Overall, I loved this book! The ending had left me dying for the sequel! I can’t wait to know what happens next! I really hope the second part is much longer than this one!

I highly recommend this book to all the people who loves to read short YA sci-fi books with alien invasion theme!