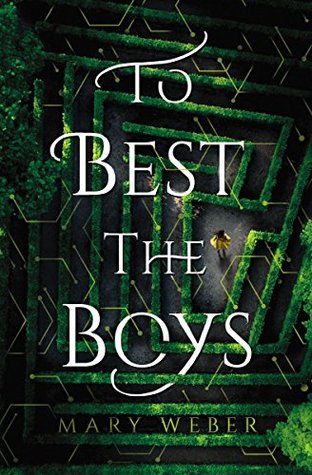 Every year for the past fifty-four years, the residents of Pinsbury Port receive a mysterious letter inviting all eligible-aged boys to compete for an esteemed scholarship to the all-male Stemwick University. The poorer residents look to see that their names are on the list. The wealthier look to see how likely their sons are to survive. And Rhen Tellur opens it to see if she can derive which substances the ink and parchment are created from, using her father’s microscope.

In the province of Caldon, where women train in wifely duties and men pursue collegiate education, sixteen-year-old Rhen Tellur wants nothing more than to become a scientist. As the poor of her seaside town fall prey to a deadly disease, she and her father work desperately to find a cure. But when her mum succumbs to it as well? Rhen decides to take the future into her own hands—through the annual all-male scholarship competition.

With her cousin, Seleni, by her side, the girls don disguises and enter Mr. Holm’s labyrinth, to best the boys and claim the scholarship prize. Except not everyone’s ready for a girl who doesn’t know her place. And not everyone survives the deadly maze.

Welcome to the Labyrinth.

“Those who never risk are doomed never to risk.”

To Best The Boys was simply an entertaining read filled with adventure, quests, feminism, and a dash of romance. It was my second  Mary Weber novel and I really liked  it. To be honest, I enjoyed it more than the first book I’ve read by her. It has a decent plot with interesting concept, and enjoyable main characters.

In the Pronvince Of Caldon, sixteen year Rhen Tellur  wanted to become a scientist but women aren’t allowed to education, they’re meant to be a good wife to their husband and look after the babies. When Rhen’s mother falls sick to an unknown illness, she and her father tries to find a cure but sadly they don’t have enough equipment and resources. When her mother’s condition worsens with each day, Rhen decides to take matters in her own hands. She competes for an esteemed scholarship to the all-male Stemwick University by disguising herself as a boy. Her cousin Seleni also decides to come along for the ride but Mr. Holm’s Labrynth isn’t an easy quest to complete. Rumor has it that you might lose your sanity or your life inside the maze.

Rhen was a strong protagonist! She’s brave, smart, stubborn and very much determined. She never gives up hope and fights for what she wants. Despite her vulnerabilities, she always stood strong. She loves science and dissecting corpses. So be warned there’s going to be some light gore in this book. I also loved Seleni, Rhen’s Cousin. She’s pretty fun and sassy character. I loved the friendship between Rhen and Seleni. Together they’re an amazing team! I also enjoyed Seleni’s beau Beryll. I’m glad he wasn’t arrogant like the other rich guys in the book. Coming to Lute, he was an interesting character. He takes care of his mother and his autistic little brother. He’s sweet, caring and thoughtful. I wish the author gave a bit more focus on his character. The romance between Rhen and Lute was sweet. It’s not the central focus of the story but I really enjoyed every interaction between them. My least favorite character in this book was definitely Rhen’s fiance Vincent. He’s a total D-bag!

The plot was interesting but it has a very slow start. The tournament doesn’t start until we’re halfway through the book. I’m usually not fan of slow starts, but surprising  I didn’t had any issue with the pacing in this book. The twists and turns were pretty good. Even though some of them were predictable, it still kept me hooked till the end. The writing was great. The book was told in Rhen’s first person pov but I wish we also had Lute’s POV in this book. The world building was nice. It was a bit similar to early 19th century victorian era. I enjoyed the labyrinth setting and the light magical aspect in it. It was a nice twist to the story.

Overall, it was a good stand-alone read! It’s not something that’ll blow your mind away but I really had fun reading it and I’ll look forward to the author’s next work.

I recommend this book if you’re looking for a stand-alone YA historical read with an entertaining plot, little bit of feminism, and a dash of romance.

23 thoughts on “To Best the Boys By Mary Weber [Review]”