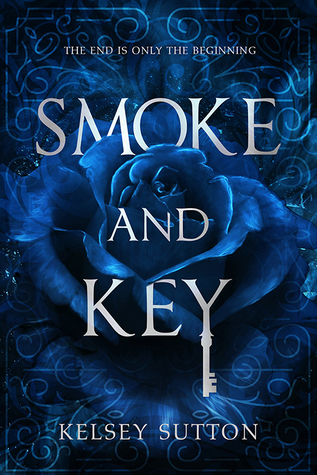 A sound awakens her. There’s darkness all around. And then she’s falling…

She has no idea who or where she is. Or why she’s dead. The only clue to her identity hangs around her neck: a single rusted key. This is how she and the others receive their names—from whatever belongings they had when they fell out of their graves. Under is a place of dirt and secrets, and Key is determined to discover the truth of her past in order to escape it.

She needs help, but who can she trust? Ribbon seems content in Under, uninterested in finding answers. Doll’s silence hints at deep sorrow, which could be why she doesn’t utter a word. There’s Smoke, the boy with a fierceness that rivals even the living. And Journal, who stays apart from everyone else. Key’s instincts tell her there is something remarkable about each of them, even if she can’t remember why.

Then the murders start. Bodies that are burned to a crisp. And after being burned, the dead stay dead. Key is running out of time to discover who she was—and what secret someone is willing to kill to keep hidden—before she loses her life for good…

Smoke And Key is a stand-alone novel written by Kelsey Sutton. It was a very unique read set in historical time period. The concept of the book was very dark and intriguing. I loved the mystery aspect in this book, but as for the romance part  I’ve mixed feelings about it. Other than that, this was an engaging read and I really enjoyed it. It was actually my first book by the author and it definitely won’t be my last.

The story begins with a girl falling from her grave to under where she meets other people who’re also fallen under just like her. As soon as she falls, she meets a broody guy named Smoke who tells her that she has died and she had to spend the rest of her afterlife in under. She doesn’t remember anything about herself not even her name. She calls herself Key because it’s the only thing  that was found on her.  Key isn’t ready to give up and tries to search for answers. Soon she makes new friends and gets acquainted with Under but suddenly she starts to regain memories which never happened to the other people in Under. When a series of murders takes place, she wants to know the true purpose of their existence in Under and her memories might be the only key to the answers.

Key is a pretty likable protagonist. She’s a brave and stubborn girl. I enjoyed her character but I wouldn’t say she was my favorite either. Smoke on the other hand is your typical broody guy with dark charms. His character was both mysterious and dark. From the start, I really wanted to know his backstory. The romance between Smoke and Key was pretty much insta-lovey which isn’t my favorite trope but In the second half, I grew to love them because we finally get the answers about their instant connection. I’m not going to say anything more because it’s a spoiler. And also there’s a light triangle in this book which I know many people aren’t fond of. As for the supporting characters, I liked Journal, doll, and maybe Ribbon too. There’re still some other characters but I didn’t paid much attention to them.

The plot was a perfect mix of mystery and a light romance. I found the story dragged in some places but overall the pacing was okay. I loved the mystery and the fantasy aspect in this book. As the story progressed, the secrets unfolded with each memory . The backstory was pretty interesting and I liked how everything was connected but sadly I predicted the villain from the start. The author’s writing style was easy to follow. The whole book was written in Key’s POV which was shifted between the past and the present. The shifting might confuse some readers but I didn’t had any issue with it. I think I enjoyed the backstory more than the present one. The setting was pretty good. I liked the dark and creepy atmosphere the author had set in the story. Before getting into this book, I really didn’t know it was a historical fantasy.

Overall, it was a good read with decent plot, unique concept, and interesting characters. Despite the issues, I enjoyed the story and the refreshing concept which was weirdly interesting and compelling. I would definitely check out this author’s other works.

If you’re looking for a good YA historical fantasy read with mystery aspect then definitely give it a shot.

18 thoughts on “Smoke and Key By Kelsey Sutton [ARC Review]”