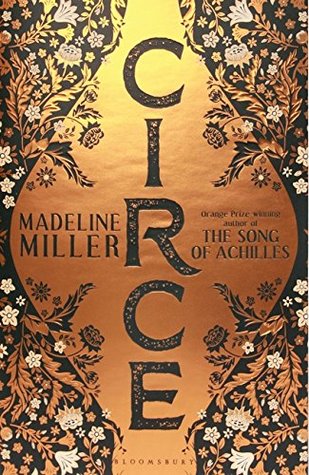 In the house of Helios, god of the sun and mightiest of the Titans, a daughter is born. But Circe has neither the look nor the voice of divinity, and is scorned and rejected by her kin. Increasingly isolated, she turns to mortals for companionship, leading her to discover a power forbidden to the gods: witchcraft.

When love drives Circe to cast a dark spell, wrathful Zeus banishes her to the remote island of Aiaia. There she learns to harness her occult craft, drawing strength from nature. But she will not always be alone; many are destined to pass through Circe’s place of exile, entwining their fates with hers. The messenger god, Hermes. The craftsman, Daedalus. A ship bearing a golden fleece. And wily Odysseus, on his epic voyage home.

There is danger for a solitary woman in this world, and Circe’s independence draws the wrath of men and gods alike. To protect what she holds dear, Circe must decide whether she belongs with the deities she is born from, or the mortals she has come to love.

“It is a common saying that women are delicate creatures, flowers, eggs, anything that may be crushed in a moment’s carelessness. If I had ever believed it, I no longer did.”

Okay, this is one of those most hyped books that I really want to check out for a while. And look at that cover, it looks stunning. I’ve never read A Song Of Achilles or any of Madeline Miller’s books but I really want to give this a shot. I thought this one’s going to be amazing because I had heard a lot of praises for it, but it turns out I didn’t enjoy it as much as I hoped. After finishing the book, I was left with mixed feelings. It wasn’t a boring read, and trust me I enjoyed CIRCE but I expected more from it. This  book was mostly a slow ride. Except for CIRCE all the other characters seemed okay but not great. The world building and the writing were good. They’re the best aspects of this book.

This book follows greek Goddess CIRCE’s life story beginning from her time of birth. She’s the daughter of the Titan sun god Helios, and Perse, one of the three thousand Oceanid nymphs. Since childhood she has quite a fascination with humans unlike her whole family. She’s the only misfit in her family who’s scorned and rejected for her lack of good looks and voice of divinity. When Circe’s path crosses with a human fisherman, she falls in love with him even though he’s a mortal. To be forever with him, she uses a dark spell which soon lands her into trouble. Her father helios and Zeus banishes her to an isolated island and she had to live there alone for eternity. With no companionship and no servants, CIRCE had to depend on no one but herself to survive. She soon learns the art of witchcraft which gives her strength and makes her confident. She finally likes her new gained freedom but she’s not alone all the time. Some were destined to land in her place of exile like The messenger god named Hermes, The craftsman named Daedalus, and the legendary hero Odysseus.

I really liked CIRCE’s character in this book! I can’t help but feel sympathetic towards her. Even though she’s a minor god, her emotions were so much like humans. She’s a daughter who yearned for a parents love, and a sister who yearned affection from her siblings. The gods were so harsh and cruel. I really enjoed her character development. After abandoned on the Isle of Aiaia, she grows from a vulnerable innocent woman to a clever, smart, and strong woman. Nature gives her strength, but from the humans she learned the meaning of love, betrayal, and sacrifice. There’s some romance in this book and CIRCE has multiple love interests but my favorites were Daedalus,  Telemachus and maybe Odysseus. I liked the relationship between Daedalus and Circe, and how they respected each other. I also liked Odysseus and his stories of trojan war but there’s some darkness in him that I didn’t liked. Telemachus has totally won me. He’s a thoughtful and caring Prince. So much different from his father. Hermes, the messenger god seemed like a trouble maker but he was pretty fun character.

There is no plot in this book, It is a retelling of CIRCE’s life which also focused on women empowerment. It is set in ancient Greece times where women were nothing but breeders.  It is very much a character driven story. If you’re expecting an action packed fantasy fiction filled with wars between titans and Olympians then you’ll be disappointed. The pacing was slow and some parts seemed repetitive. The writing was wonderful and very descriptive. I absolutely loved it. The book was written in first person pov but I would’ve enjoyed it more if it was written in third person pov. The world building was amazing. Madeline’s spell binding writing will drag you into this world of magic, gods, heroes, witch-crafting, and monsters.

Overall, I really liked this book but I didn’t love it! I’m one of the minority that didn’t love this book. There’s nothing wrong with this book. It is a clear case of it’s not you, it’s me.  I highly recommend it if you’re into greek mythology. If you don’t know, this book has recently won the Goodreads choice awards so definitely give it a shot.

I highly recommend it to all the greek mythology lovers!