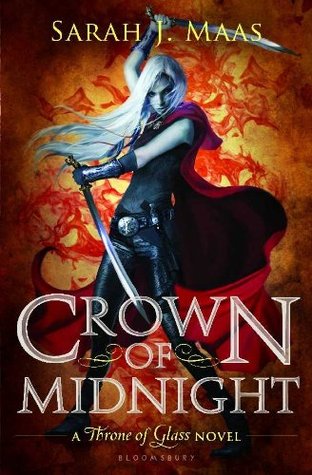 She is the greatest assassin her world has ever known. But does she have the heart of a killer?

After a year of hard labor in the Salt Mines of Endovier, eighteen-year-old assassin Celaena Sardothien has won the king’s contest to become the new royal assassin. But Calaena is far from loyal to the crown. Keeping up the charade – while pretending to do the king’s bidding – will test her skills in an entirely new way. And it certainly isn’t the only point of confusion for the young girl. Because though she’s made her choice between Dorian and Chaol, the ways of the heart are never simple…

Crown Of Midnight is the second installment in Throne Of Glass series. The first time I read this book, I didn’t enjoy it as much as I hoped, but this time I really loved it. I think it was even better than the first book. The whole journey was an emotional rollercoaster ride. I loved the magic, the mystery and the romance. The characters were amazing. It was a great sequel and the plot twists made this book even more enjoyable.
The book starts off two months after Celaena becomes The king’s Champion. She does his every bidding by eliminating the traitors who’re a major threat to him, but she’s not truly loyal to him. If the king discovers her treachery, her head would be the next one on the execution block. Her next target is Rifthold’s famous courtesan and also her childhood crush. She needs to figure out the other rebels working with him before her time runs out. While playing the  king’s Champion, Celaena finally made her choice between Chaol and Dorian but it all falls apart when tragedy strikes her.
I loved Celaena in this book more than in the first book. She was mature, strong and vulnerable. She’s a heroine with flaws and that’s what makes her special. She’s very protective when it comes to her loved ones. Her friendship with Nehemia has grown strong. They’re both like sisters. I also loved Chaol, but his loyalty to the king of Adarlan was kinda annoying. He doesn’t like him, but he still serves him. I’ll look forward to the day he turns against his king. Dorian was very much entertaining. It was good to see the real side of him other than his flirty charming side which makes ladies swoon over him. He’s pretty fun and I can’t wait to know how his character evolves in the next book. I loved the romance and I’m rooting for Chaol and Celaena, but after the events at the end, I’m kind of disappointed at the way things have turned out between them. I’m not going to say anything because it is a spoiler but the ending left me a little sad. I still have a tiny hope that my ship will not sink.
The plot was amazing! It was well written and I enjoyed every minute of it. The pacing was great. There were so many revelations and the last part of the book was pretty much intense. Celaena’s heritage was easy to guess, I saw that one coming from the start but there are other twists that really surprised me. The tragic part was heart breaking. I didn’t see that coming. The writing was addicting and as usual, the book was written in third person POV. I enjoyed the magic and the mystery.  The secret tunnels under the castle was totally creepy. I’m glad there was more magic in this book than the first one. The next book is set on Wendlyn and I’m very much excited to finally meet the fae.
Overall, I loved this book! It was a great sequel filled with action, drama, romance, magic and mystery. I can’t wait to know what’s gonna happen next because this is just the beginning and the next book is the start of an epic journey and I can’t wait to meet Rowan.
Recommend it?

I highly recommend this series to all the YA fantasy fans!