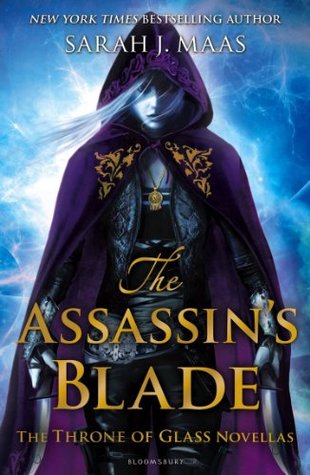 Celaena Sardothien owes her reputation to Arobynn Hamel. He gave her a home at the Assassins’ Guild and taught her the skills she needed to survive.

Arobynn’s enemies stretch far and wide – from Adarlan’s rooftops and its filthy dens, to remote islands and hostile deserts. Celaena is duty-bound to hunt them down. But behind her assignments lies a dark truth that will seal her fate – and cut her heart in two forever…

After five years of long wait, I’m pretty excited to be finally back into this world of Erilea. While everyone was gushing about this series, I’ve been patiently waiting for the final book to come out since 2013 because I wanted to binge read the whole series. Trust me, the wait nearly killed me. Sometimes, I nearly gave into the temptation. It’s pretty hard to avoid  spoilers for this series because they’re everywhere in the social media and I’m glad that I didn’t get spoiled for any major ones. So without any further ado, let’s get into the review.

This is a first novella in this book and It was a great start because I really loved it. Sixteen year old Celaena Sardothien is Adarlan’s best assassin. Thanks to Arobynn Hamel master of the Assassin guild, she lived a luxurious life. she’s arrogant, prideful, confident, and beautiful. I enjoyed her character despite her bratty attitude. She might be deadly assassin but she doesn’t like killing innocents and children. We’re also introduced to Sam Cortland. He’s one of the guild’s member and quite an adorable character. Sam and Celaena don’t get along with each other at the beginning. When Arobynn Hamel  sends them together on a new mission at skulls bay, she meets the pirate Lord Rolfe who doesn’t like Celaena’s attitude. Soon Celaena discovers the real mission they’ve been sent for and she’s not happy about it.

After the events in the Assassin and The Pirate Lord, Celaena gets punished for her disobedience and she was sent to train under the Silent Assassins which will take a long journey. While waiting for her boat, she stays at Pig Inn where she meets a young barmaid named Yrene. Okay, this one seemed more like a filler to me but it wasn’t a bad novella. I enjoyed it but didn’t love it. I’m pretty sure that we’ll get to  meet Yrene once again in the future.

After a long journey in a scorching desert, Calaena finally arrives at the Silent Assassin’s Guild, but her task is not over yet. She needs to get a letter of Approval from the Mute Master himself which is not an easy task because he’s not someone who can be easily be convinced. She needs to earn his trust and Celaena don’t have the time. I loved this novella. After staying a while with the Silent Asassins, Celaena discovers how different they’re from her guild, who’re very violent and abusive towards their guild members. She also makes a friend named Ansel. She’s bold, sassy, and daring. I really liked the friendship between Ansel and Celaena. Together they’re totally kickass. The ending was bittersweet. I hope we get to meet Ansel once again.

~The Assassin and the Underworld~
★★★★

This novella was engaging and entertaining. After three months, Celaena is finally back in Rifthold along with a letter of approval and a huge treasure, enough to pay back her debt to Arobynn. She finally realizes how wrong it was her relationship with Arobynn and she decides to finally get back her freedom.  I always found the relationship between Celaena and Arobynn  disturbingly weird. I’m still confused what is their relationship. Celaena finally meets Sam and they both realize how much they missed each other. They make a great couple. The chemistry between them is pretty good.I totally shipped them!

One last mission to finally gain the freedom. Oh, this was an heart breaking novella. I knew what’s going to happen at the end but it still left me pretty sad. Sam and Celaena are ready to leave the guild to make their own future but they don’t have enough resources so they take one last job which is very risky and dangerous. During the mission, things doesn’t go as planned, and Celaena is left with a broken heart and a lifetime of slavery at Salt Mines in Endovier.

Overall, it was a great read and I really loved the world, the characters, and the beautiful writing.