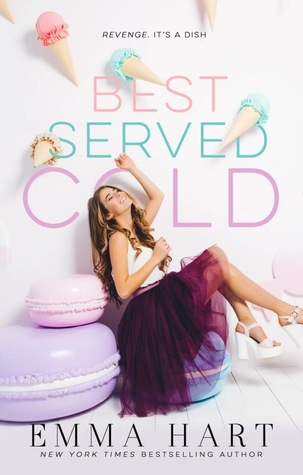 Revenge is a dish best served cold. Which is a real problem when the attraction runs red-hot.

Trust me. I know. The only reason I decided to renovate my family’s ice-cream store was to serve up a sundae full of revenge for my a-hole ex who opened an ice-cream store right next to mine.
It was supposed to be simple.
Renovate. Reopen. Put his peachy butt out of business.
Until he decided to get under my skin—and broke my toe.
Now, I’m stuck with Chase in my store every day, helping me renovate. But he’s also in my head, and I’m spending a little too much time up against his abs.
Not that it’s the worst place to be.
But it doesn’t change anything. I still hate him, and I’m still going to get my revenge.
Right?

“ You can love someone and still move on with your life. You can love someone and be over them and your relationship. They’re the kinds of loves that will always be there no matter what you do or where you go or who you meet—like your first true love.
Then there are the kinds of loves that punch you in the gut and knock you down.”

Best Served Cold is a second chance stand-alone Romance written by the wonderful Emma Hart. It was actually my first Emma Hart book and I had fun reading it but I can’t say that it was my favorite. It was a short romance read and I think it’ll work out for people who’re looking for something light, quick, and fun. Raelynn and Chase are enjoyable characters but I found Raelynn a bit too stubborn. I really loved the cute cover of this book it was the first thing that grabbed my attention and let me tell you guys, you’ll crave for Ice-cream while reading this book and it was a sweet torture.

Raelynn Fortune break ups with her boyfriend because she wanted to concentrate on her dream which is running her family business, an Ice Cream Store called Best Served Cold. She shared all her plans and Ideas about her dream store with her boyfriend Chase before they broke up. Chase is not ready to give up on their relationship because he knows that she still has feelings for him. After one month of the break up, Chase opens his own Ice Cream store right next to her. Because of his new store, her business starts failing, and Raelynn was hurt by his betrayal. After two years, She’s finally ready to fight back by renovating her old store and get him out of business, but during the renovations Raelynn hurts her toe because of Chase. Feeling guilty about her situation, Chase helps her out until her toe gets healed and hence begins the cat and mouse game. Her attraction for Chase re-ignites, but she still can’t forgive him for his betrayal, and she will not stop until she gets her sweet revenge.

Raelynn was a fierce, headstrong and Independent girl who loves making Ice-Cream but she’s also pretty much short tempered. She was a likable character but sometimes I found her a bit annoying. She seemed too stubborn and didn’t want to give Chase another chance. She knows she still likes him, but she didn’t want to listen to his reasons. Chase was sweet, caring, and oh so sexy boyfriend. He makes some stupid decisions and unknowingly ends up hurting the girl he loves. I feel for this guy but what he did was definitely wrong. He tries to make up with Raelynn, but man she was too stubborn. They still have feelings for each other and they try hard to fight their attraction. I really liked the fun banters between them and their romance was super cute and hot. As for the other characters, I liked Chase’s sister Marnie who loves annoying him, and also Raelynn’s grandma, she was so much fun.

The story-line was pretty much predictable but it was a fun read filled with romance, Ice Cream, and some family drama. It was a short read and can be finished in one sitting. I liked the Ice Cream aspect in the book and all those Ice cream making left me craving me for my own Unicorn Ice cream.  The writing was pretty good and easy to understand.  The book was told in dual POV’s. The characters were fun and the romance was kinda cute and sexy. Overall, I enjoyed reading this book and I’ll be definitely checking out more of Emma Hart’s ROM-COM’s in the future.

I recommend this book to all the book lovers who loves to read second chance romances.