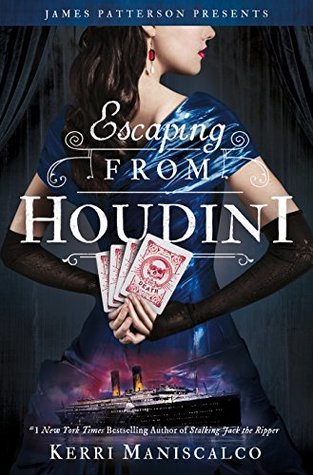 Audrey Rose Wadsworth and her partner-in-crime-investigation, Thomas Cresswell, are en route to New York to help solve another blood-soaked mystery. Embarking on a week-long voyage across the Atlantic on the opulent RMS Etruria, they’re delighted to discover a traveling troupe of circus performers, fortune tellers, and a certain charismatic young escape artist entertaining the first-class passengers nightly.

But then, privileged young women begin to go missing without explanation, and a series of brutal slayings shocks the entire ship.

The strange and disturbing influence of the Moonlight Carnival pervades the decks as the murders grow ever more freakish, with nowhere to escape except the unforgiving sea. It’s up to Audrey Rose and Thomas to piece together the gruesome investigation as even more passengers die before reaching their destination. But with clues to the next victim pointing to someone she loves, can Audrey Rose unravel the mystery before the killer’s horrifying finale?

“If you wish to go, I’ll never make you stay. I might not do and say the proper thing all the time, but I do know that I love you enough to set you free.”

Stalking Jack The Ripper is not my favorite series but I really love the main characters Thomas Cresswell and Audrey Rose. I had high expectations for Escaping From Houdini because the synopsis quite intrigued me and also there’s a lot hype surrounding  this book. I actually thought I would love it, but sadly it turns out to be my least favorite in the series. I liked the murder mystery but the unnecessary drama  ruined the overall fun for me. Audrey Rose makes some dumb decisions in this book and I can’t believe she’s the same Independent Audrey from the previous installments. Another disappointing thing about this book was how Thomas Cresswell was kinda sidelined by another character. Audrey and Thomas always make a great team in investigating murders and this book was missing all that that fun.

After solving the murder mystery of Vlad The Impaler in Romania, Thomas and Audrey sets on a new journey to New york with her uncle to investigate another Murder Mystery. They on-board RMS Etruria for a week long voyage. For entertaining the guests, the captain of Etruria hires a travelling Circus called Moonlight Carnival. During their week long journey, every night they get to experience unparalleled magic and mystery they’ve never seen before in their life. On the first night of the show, they encounter a murder which brings chaos and soon series of brutal murders takes place on the ship.  Audrey wanted to  forget the dark events of her past and look  forward to a bright beginning, but once again she was thrust into the dark with a new case and her first suspect is the mysterious Moonlight Carnival group. Before they reach to America, Audrey and Thomas had to catch the murderer and stop him/her from killing more innocents.

I was really disappointed with Audrey Rose in this book. Where was the independent and rebellious girl we’ve met in the previous installments? Her actions seemed very ridiculous in this book especially her developing feelings for a stranger in less than a week. Mephistopheles has that mysterious persona which attracts women but his actions didn’t seem trust worthy and he acted like Jerk sometimes. I can see the appeal but he’s also one of the suspect. I  really wasn’t expecting a triangle in this book. Thomas Cresswell is a hopeless romantic and that is what makes him so charming. I seriously love his witty humor. He never feels ashamed of expressing his love for Audrey Rose. Even though she hurt him with her lies, he was never angry with her. If you’re expecting more Thomas Cresswell in this book then you’re going to be disappointed because he was hardly there in the story. The plot was mostly centered around Audrey and Mephistoheles.

The murder mystery in the plot was unpredictable, but honestly I wish the author gave us some clues to figure out which one is the murderer. Everyone was a suspect and when the killer was finally revealed I was really surprised, but also a little disappointed. I had an issue with the sudden triangle which seemed totally unnecessary. After everything they’ve been through, Audrey is confused about her feelings for Thomas because she starts to develop feelings for another guy she barely knows. It seemed very unrealistic. It somewhat ruined the fun for me. The pacing was okay. It’s not fast paced and neither a slow paced read, It’s somewhere in between. The writing was great. The book was told in Audrey’s first person POV. The historical setting was outstanding and one of the best things  I love about this series. As usual, this book has some bloody gore and brutal murders. If you can’t handle them, then skip reading those parts.

Overall, it was an okay-ish read for me but I really liked the Houdini aspect. I actually want to give it a three star, but because of that epilogue I decided to add a half star to it. Anyways, I can’t wait to read Thomas and Audrey’s next investigation and I hope they finally tie the knot.

Despite the issues, I still want to recommend this book. It may not wowed me, but it might for you. So, definitely give it a shot if you’re into YA dark mystery books with historical setting.