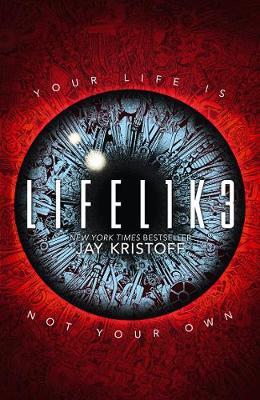 It’s just another day on the Scrap: lose the last of your credits at the WarDome, dodge the gangs and religious fanatics, discover you can destroy electronics with your mind, stumble upon the deadliest robot ever built…

When Eve finds the ruins of an android boy named Ezekiel in the scrap pile she calls home, her entire world comes crashing down. With her best friend and her robotic sidekick in tow, she and Ezekiel will trek across deserts of irradiated glass, battle cyborg assassins, and scour abandoned megacities to save the ones she loves…and learn the dark secrets of her past.

“Your past doesn’t make calls on your future. It doesn’t matter who you were. Only who you are.”

I’m a great fan of Jay Kristoff’s Nevernight Series and Illuminae Files Trilogy. LifeL1K3 is a first book in lifelike duology. I’ve recently finished LifeL1k3 and I absolutely loved it.  It’s a fast paced Post apocalyptic sci-fi story with robots and androids. The whole journey was an exciting ride filled with action, humor, thrill, and romance. It really gave me the Mad max Vibes. The characters were pretty amazing and fun. I loved all of them especially Lemon Fresh. She was quite quirky and hilarious. I enjoyed every aspect in this book. The world building, the writing, and the concept everything was great.  Mister Kristoff has really done a fabulous job with this book and I can’t wait to read the  next one.

Seventeen year old Eve is a girl who lives with her sick grandfather in Tire Valley. She fights in Wardome to earn enough credits to buy medicine for her grandpa. Wardome is a place where rebel robots gets punished for failing to obey their three laws. During her fight with a giant gladiator robot named Goliath, she nearly gets crushed by him, but suddenly she destroys all the circuitry inside the robot with her mind which brings chaos in the arena. After losing all her money, Eve is now on the run from the brotherhood who hunts anomalies like her. Together with her best friend Lemon, her robotic sidekick Cricket and her bitzhund Kaiser they all travel back to their home without getting caught but during their journey they come across a LifeL1k3 android named Ezekiel and Eve’s entire world comes crashing down, when he reveals the dark secrets of her past. When someone from her past Kidnaps her grandfather, Evie and her group sets on a journey to Babel where it all begin, but it wasn’t an easy journey when they’re hunted by a religious sect, battle cyborg assassins, and a dangerous hitman. As Evie reaches her final destination, she finally uncovers all the lies, secrets, and betrayals hidden from her.

I loved all of the characters in this book including the secondary ones. Mister Kristoff has done a great job in building this amazing set of characters who were totally fun. I loved seeing them working together as a team and their banters were hilarious. Evie with her fauxhauk look and a cybernetic eye was totally badass. She was tough, spunky, fierce, and stubborn girl who will not give up without a fight. Lemon Fresh was totally fun. I really liked her quirkiness and fun personality. She’s obviously my favorite character in this book. Ezekiel aka Zeke is a artificial human with a flawless body. He’s pretty sweet  with his charming dimples. I really enjoyed his character. Cricket is Eve’s sidekick AI robot who has a great sense of humor. He’s quite snarky, hates being called Little, and oh yeah, he likes reminding everyone of his metal man parts even though he doesn’t have any. He’s my second favorite character in this group. They also have a bitzhund named Kaiser. He’s Eve’s cyborg dog. When he is in fight mode he is a fierce protector, but in his normal mode he was totally adorbs. Preacher was an interesting character. I will not say much about him but this guy was freaking crazy when it comes to hunting his targets. The romance between Eve and Zeke seemed insta-lovey, but it didn’t hinder my enjoyment at all. The friendship between Eve and Lemon was wonderful. They really have a strong bond and its one of the best things I loved about this book.

The plot was exciting, engaging, and thrilling throughout. It’s a fast paced book with non-stop action so I was never left bored. There are lots of twists and turns which kept me hooked to the story till the end. The action scenes were very well done. My favorite was the glass desert part. It totally gave me the mad max vibes. The writing was witty and totally addictive. I absolutely loved it. The book was told in Eve’s and Lemon’s third person POV. The world building was amazing. I really liked the futuristic post apocalyptic setting the author has created. After another world war, most of the world had turned into a nuclear wasteland and there’s no more USA. The world is run by corporations and robots are nothing but slaves who’re programmed to protect humans. I really can’t wait to explore more of this world.

Overall, It was a fantastic read with badass action! I enjoyed every minute of it. The surprising twist at the end had left me wanting for. I can’t wait to know what Mister Kristoff has in store for us next.

I highly recommend this book to all the booklovers who loves action packed YA sci-fi fantasy. If this book is on your TBR list, then pick it up ASAP! IT. WAS. AMAZING!