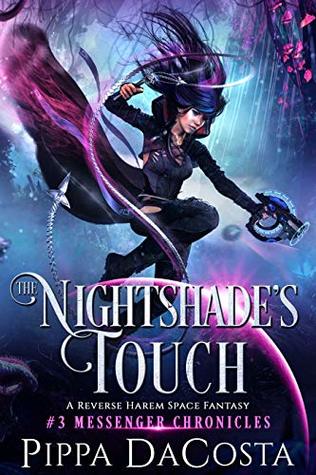 Be careful which star you wish upon…

The unseelie—banished by Oberon long ago—are stirring awake, and there’s one name on their poisoned lips: Nightshade.

Kesh is beginning to settle into her role as Halow’s messenger, saving people from the fae with the help of Kellee, Talen, Arran and Sota, but if she has any hope of making her wrongs right, she must trust those around her. Without them, there is no Messenger. Friends, lovers, more. But one has a secret. A secret so dark it threatens to change everything Kesh believes in. A secret that could change the fate of Faerie, Halow, and all of humanity.

When the fae abandoned the stars long-ago, they left behind more than fairytales.

They left behind their monsters.

The Nightshade’s Touch was an exciting sequel to Game Of Lies. I’ve been very eager to get my hands on this book since I had finished the previous installment and well, Pippa has done it again. This book totally slayed me! I really loved getting back into this world and I enjoyed every second of it. Kesh was pretty amazing in this book and also not to forget her harem Kellee, Talen, and Arran/Aeon. This whole book was a roller coaster ride because a lot of secrets were finally revealed in it. This series is getting better and more exciting with each installment, and I need the next book right now.

The story picks up from where it was left off in Game Of Lies. After killing thousands of Fae, Kesh has finally taken her role as hallow’s messenger with her group Kellee, Talen, Arran, and Sota. While they’re celebrating in the backwater Colony called Hapters, Oberon’s forces suddenly descends upon them which makes them flee from there, but unfortunately the humans were taken captive by the Oberon’s personal Guardian Sirius. Kesh and her group plans to rescue the prisoners but with her group keeping secrets from her, it’s not going to be an easy task.  Kellee still has hard time trusting Kesh, and Talen is hiding dangerous secrets that he’s reluctant to reveal. Aeon aka Arran on the other hand has full faith on her, but he isn’t the Aeon of her past, he doesn’t remember of their past and her betrayal after eating the star fruit. When the Fae abandoned their stars, they left something dark behind. When the Unseelie monsters starts to appear in hallow, Kesh decides that it’s time for her to get all the answers that she deserves.

I loved all the characters in this book including the new ones. I was a little frustrated with Kesh, Kellee, and Talen in Game Of Lies, but this book made me love them even more. Wraithmaker Kesh Lasota has finally comes to her senses and she’s not the Oberon’s loyal toy anymore, but sadly no one is ready to trust her because she’ll always be his beloved loyal saru. Marshal Kellee is still being cold towards Kesh but he can’t deny his attraction towards her. I really miss his old self who was so much fun. Talen is my favorite character. He’s the mysterious fae in the group who’s holding many secrets and when his guarded secret was finally revealed, I was totally blown away. Arran/Aeon is like a loyal puppy who adores Kesh and totally trusts her. To be honest, I really wish he hadn’t ate that Star Fruit because I want the Old Aeon back. Well Sota was Sota. He’s an android with a great sense of humor . I’m glad that he was in this book. The Dreamweaver/Mad Prince Eledan was pretty much absent in this book which is a bit disappointing but i’m so glad to hear that the next book is about him. Sirius was a nice addition to the plot and I can’t wait to know more about him. Oberon was an intriguing villain. His kingdom is falling apart and he needs Kesh beside him but it seems like she’s far more important to him than a loyal Saru.

I loved the Plot! It was entertaining, action packed, and engaging throughout. The story moved in a fast pace and there’s never a dull moment.  There are a lot of plot twists and shocking revelations that’ll blow your mind away. We’re going to get more information about our characters, more details about this world, and the conflicts between the Seelie and Unseelie court. While some of our questions were answered in this book, it left us with more questions. Finally, there’s some progress in the romance department and I can’t wait to see how it develops in the next book. The whole book was written in Kesh’s first person POV. The writing was addicting, I loved it! The fae magic and the world building was fantastic! We need more Fae-in-Space novels. Pippa has done a great job with this series.

Overall, I absolutely loved this book! It’s a total entertainer filled with right amount of kickass action, adventure, fae, and angsty romance. The ending part kinda reminded of ACOMAF’s ending and the surprising twist left me wanting for more. Anyways, I’m super excited for the next book because my favorite mad prince is finally going to make his comeback. I can’t wait to read it!

I highly recommend this series if you’re into handsome fae and kickass heroine! It is an action packed reverse harem sci-fi series with slow burn romance but it’s not one of those smutty sci-fi romances filled with lots of sex.