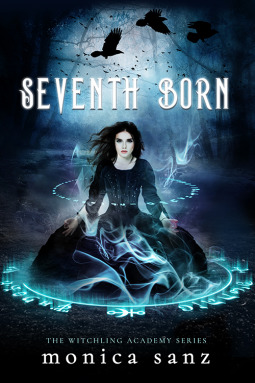 Abomination. Curse. Murderer. All names hurled at eighteen-year-old Seraphina Dovetail. As the seventh-born daughter to a witch, she’s the cause of her mother losing her powers and, in turn, her life.

Abandoned as a child, Sera dreams of becoming an inspector and finding her family. To do that, she must be referred into the Advanced Studies Program at the Aetherium’s Witchling Academy. Her birth order, quick temper, and tendency to set things on fire, however, have left her an outcast with failing marks…and just what Professor Nikolai Barrington is looking for.

The tall, brooding, yet exceedingly handsome young professor makes her a proposition: become his assistant and he’ll give her the referral she needs.
Sera is quickly thrust into a world where witches are being kidnapped, bodies are raised from the dead, and someone is burning seventhborns alive. As Sera and Barrington grow ever closer, she’ll discover that some secrets are best left buried…and fire isn’t the only thing that makes a witch burn.

“Safety, companionship, and adventure with the possibility of blood, murder, and death, all the while investigating love.”

Seventh born is a first book in The Witchling Academy series. I didn’t put any high expectations on this book because I’m not familiar with this author, but boy this book was really good. I enjoyed it more than I thought I would. The witchy magic in this book was the best thing I loved about it and I quite enjoyed the main characters Sera and Mr. Barrington. Besides the slow burn romance, I really liked the historical vibes, necromancy aspect, and murder mystery in this novel. There is a triangle in this book which is so many reader’s pet peeve, but don’t worry it’s not really central focus of the book and it won’t hinder your enjoyment at all. The story was very entertaining and I enjoyed every minute of it. This isn’t an action packed novel, it’s more like a murder investigation novel and trust me, the twists really surprised me even though I had my suspicions on some of the characters.

The Seventh born witches are cursed abominations in Seraphina Dovetail’s world because they not only take away their birth mother’s powers but also their life.  They’re treated like a bad omen because of their birth order. After Seraphina’s mother died giving birth to her, she was abandoned. She remembers nothing about her family and her life before except for the past two years. To bring a new change regarding their cruel treatment towards the Seventh born’s, the prestigious Aetherium’s Witchling Academy accepts her as a student in their school, but sadly she wasn’t treated as their equal. She was always look down on with disdain by her fellow students and teachers. Sera dreams to become inspector and find her family, but rebelling against them will jeopardize everything and she tries hard to control her quick temper which always sets things on fire. Then she meets the tall, handsome and brooding Young Professor Barrington who makes an offer to become his assistant in exchange for his referral which she really needs. Sera agrees to be his assistant and soon she was thrust into a world filled with illegal and dangerous murder investigations, forbidden necromancy magic, and dark secrets. If the Witchling academy finds about their secret investigations, it’ll ruin both of their careers.

I really enjoyed the main characters Sera and Mr. Barrington. Both of them were pretty much flawed and complex. Sera was fierce, stubborn, and a strong girl with quick temper. I really liked her character. She’s a survivor who’s gone through physical abuse in her past and I’m glad that she fought back her abuser. Mr. Barrington is a broody and handsome guy who harbored many secrets. His character was very intriguing and I really wanted to know more about him. He’s totally swoon worthy. I enjoyed Sera and Barrington working as a team. There is a very light slow burning romance between them, and I can’t wait to see how it develops in the second book. Timothy Delacort was the second love interest. He was a pretty likeable guy with sweet personality. He genuinely loves Sera and I felt bad for him at the end. Mary was another character that I liked. She’s the only friend of Sera in Witchling Academy. I really liked her, but she does something at the end which really disappointed me.

The plot was very interesting filled with mystery, suspense, crime, dark magic, horror, and a light romance. Even though it’s a little bit slow paced read, the story held my attention throughout. I expected this to be another cliched YA love story, but it really surprised me. The story was very unique and there are a lot of twists and turns which I didn’t see coming. I quite enjoyed the mystery surrounding the gruesome murders and also the magic. I enjoyed the writing style of the author. It was very descriptive and easy to understand. The whole book was written in Seraphina’s third person pov. The world the author created was pretty good. I loved the historical stetting and the dark atmosphere she has created in the story. The magic was the best thing I loved about this book. I love necromancy and cult aspects in my fantasy reads.

Overall, I had a great time reading this book! It was a fun read with enjoyable characters. The book finally concluded with no cliffhangers but there are still lots of unresolved questions and I can’t wait to find them out in the next book.


I highly recommend this book if you’re into witchy books or dark mystery novels set in historical times.