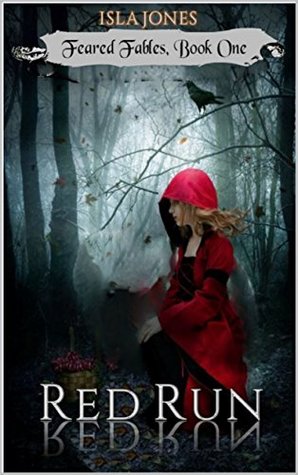 FEARED FABLES * RED RUN
A dark re-telling of the old tale, where Red Riding Hood isn’t so little, and mightn’t be so good after all.

The villagers call her Red.
It’s the colour of her lips, her cloak, and the blood that stains her when she returns from the woods.
The villagers call her Red for many reasons, but most of all, they’re too afraid to call her what she really is.
Witch.
But when a wolf stalks the village, Red might be the only one who can save them from the beast…the beast who has his sights set on her already. Red races against the three days until the full moon to uncover the wolf’s identity, find out what he wants from her, and save herself. To hell with the village, Red just wants to save herself.
That’s what good witches do.

*I received an ecopy of this book from the author this has in no way influenced my review.*

Red Run is the first installment in a standalone series Feared Fables. When the author approached me for a review request, I couldn’t resist because I love dark fairy tale retellings. As soon as I got my hands on it, I jumped into it. It was a quick short novella and I finished it in one sitting. It’s been a very long time since I’ve read a Red Riding Hood retelling and I really had fun reading this book. It was a good retelling. I enjoyed the characters, the setting, and the plot. Red Run was the first book I’ve read by the author and I might check out her other works.

Nineteen year old Red is a hunter and also a village witch who makes magical healing potions with her herbs. She’s an orphan and comes from the family of witches. People in her village aren’t fond of her presence especially the village priest who pretends that she doesn’t exist and only the desperate seeks her help. She often visits her grandmother who lives in the woods. When a werewolf starts to wreck havoc on her village by killing people, everyone begins to panic and Red is their only hope of saving them from the monster. When Red’s grandma reveals the history between Werewolves and Witches, she plans to escape the village before the wolf finds her and realizes that she can’t escape from him and decides to uncover the werewolf’s real identity before the full moon approaches.

I really liked the character Red as a witch. She’s smart, strong, determined, and beautiful. She is a clever hunter but don’t expect her to be a kickass werewolf hunter. She’s pretty skilled in making potions, but she doesn’t have much knowledge in sword handling. Her character was very refreshing to read. We also have two handsome male characters in this book, A Broody Hunter named Coltan, and a sexy and charming aristocrat named Dante. Both of them were pretty interesting and I wish this book also has their perspectives. As expected, there is a very light romance in this book but it’s really not the central focus of the story.

The plot was engaging throughout. The story had me captivated from the very beginning. In folklore, Werewolves always have a strong connection to witches, and the author did a nice job in writing her own version of Red. The pacing was good and there’s never a boring moment.  There are some plot twists in the book which really took me by surprise. Even though some parts became predictable at the end, it didn’t hinder my enjoyment at all. I loved the writing style of the author. The whole book was told in Red’s POV. There’s not much world building in this book, but I really loved the whole setting of the snowy forest and the little village.

Overall, I thoroughly enjoyed reading this book! I wish it wasn’t a novella because things happened pretty fast at the end. The ending was bittersweet yet satisfying. It left me a little heartbroken because I really didn’t see that coming.

If you’re looking for a short dark fairy tale retellings then definitely pick this up.