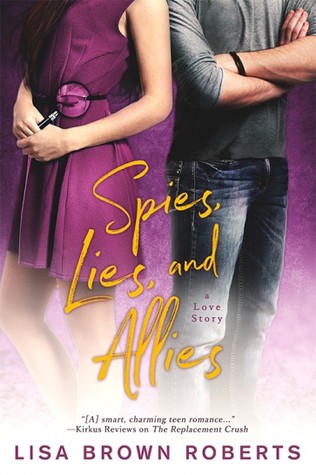 Summers are supposed to be fun, right? Not mine. I’ve got a job at my dad’s company, which is sponsoring a college scholarship competition. I just found out that, in addition to my job assisting the competing interns, I’m supposed to vote for the winner. Totally not what I signed up for.

My boss is running the competition like it’s an episode of Survivor. Then there’s Carlos, who is, well, very distracting––in a good way. But I can’t even think about him like that because fraternizing on the job means instant disqualification for the intern involved.

As if that’s not enough, an anonymous informant with insider intel is trying to sabotage my dad’s company on social media…and I’m afraid it’s working.

Much as I’d love to quit, I can’t. Kristoffs Never Quit is our family motto. I just hope there’s more than one survivor by the end of this summer.

I loved Lisa Brown Robert’s Playing the Player and when I heard of this book, I knew I had check it out because it sounds so fun. Well, It did not disappoint me. I quite enjoyed   the story. It was an adorable read filled with cute romance, humor, friendship, family and lots of geeky references. I liked the plot. The characters were totally fun and I enjoyed the friendly banters between them. The main characters Laurel and Carlos were super cute and their romance was just adorable.

Laurel’s father Mr. Kristoff is the head of Emergent Enterprises and also a total  workaholic who spends most of his time in his office and barely have time for his daughter. In order to spend more time with her dad, she asks him to let her join his company. He rejects at the beginning but after some persistence he finally gives in. In the company, she had to assist him on a college scholarship competition. To her surprise, her father informs her that she also get to vote the winner which is not something she signed up for. Now laurel’s job is not only to assist the new interns but also spy on them to find the perfect candidate who deserves the full scholarship. One of the intern named Carlos makes her heart flutter but fraternization on the Job means instant disqualification. As Laurel  spends more time with the interns, she gets to know more about them and she feels that everyone deserves the scholarship, but unfortunately only one can win the grand prize. Adding to that, someone from the inside is trying to sabotage her father’s company on social Media which can ruin the internship program.

I enjoyed all the characters in this book! Laurel, our main protagonist is a pretty likable character. She’s smart, funny, super sweet and a total nerd. Sometimes her actions annoyed me, but overall she’s a good protagonist. Her struggle to make one of her father’s employee laugh with her ridiculous jokes everyday was epic. She’s a huge Star wars fan and pretty much obsessed with everything related to star wars. I loved the father daughter relationship between Laurel and her father. She calls him Dad Vader LOL. Her father is also a star wars fan and it was fun watching them argue with each other using star wars references. I loved Carlos! He’s adorable, smart, and sweet guy who deeply cares about his family. The relationship between Laurel and Carlos was fun from the start. Their romance was totally adorbs and I absolutely loved their fun banters.

As for the supporting characters, I also liked the other interns Jason, Trish, Elijah, Ashley, and also Mr. Mantoni who works for Laurel’s dad. Jason is Laurel’s high school crush but he always gets her name wrong. I felt pretty bad for him after hearing his backstory. Trish is Mr. Mantoni’s daughter.  She’s  fiesty, snarky, and a total feminist. I didn’t liked her at the beginning because she was pretty much rude towards Laurel but eventally I grew to like her. Elijah is a total fun character who’s also a nerd just like Laurel. I think no one can hate this guy because he’s absolutely fun. Ashley is a smart girl with beautiful looks. Like Laurel, I also judged her character but she turns out to be a nice person. Mr. Mantoni is in-charge of the scholarship program. He’s pretty scary but not really a bad guy.

The plot was very much entertaining! The pacing seemed a bit odd to me because some scenes felt too slow but It didn’t hinder my enjoyment. Besides the romance, I’m glad this book also focused on family relationships and friendship. It’s a perfect YA contemporary read. Although the mystery was predictable, I liked how it brought everyone together. The friendship was well developed. At the beginning the interns didn’t get along with each other, but as the story progresses they become friends who’ll stand up for each other. There’s a lot of geeky references in this book, but even if you’re aren’t familiar with them  you’re still going to enjoy the story. The writing style was pretty good. I loved reading the book from Laurel’s pov. She’s hilarious throughout and I enjoyed her inner monologue.

Overall, It was a fun read and I really liked it! It’s a light-hearted story filled with drama, romance, mystery, family, and friendship. The ending was satisfying and nicely wrapped up. It has a slow start but in the end it’s totally worth it.

I highly recommend it to everyone who loves cute YA contemporary novels.