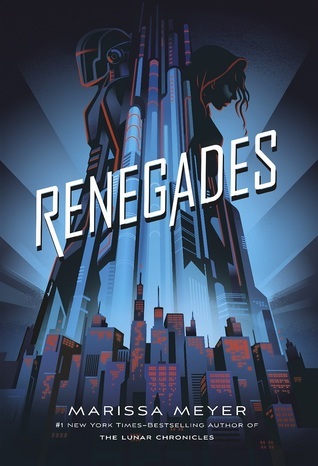 The Renegades are a syndicate of prodigies–humans with extraordinary abilities–who emerged from the ruins of a crumbled society and established peace and order where chaos reigned. As champions of justice, they remain a symbol of hope and courage to everyone…except the villains they once overthrew.

Nova has a reason to hate the Renegades, and she is on a mission for vengeance. As she gets closer to her target, she meets Adrian, a Renegade boy who believes in justice–and in Nova. But Nova’s allegiance is to a villain who has the power to end them both.

I really liked Marissa Meyer’s The Lunar Chronicles. I haven’t finished it yet but I’ll someday. When I first heard about Renegades I was very intrigued because there’s not many YA books based on superhero fiction and with that synopsis I couldn’t resist myself from reading it.  Coming to the book, it was so much fun to read. The story is all about Superheros VS SuperVillains and whose side you’re on. I really liked the concept although the plot felt a little bit cliched. The characters Nova and Adrian are pretty good protagonists. I also liked the world building and the captivating writing style of the author.

Nova Artino is an Anarchist who’s called Nightmare. She has a power that can put people to sleep with her touch. After her parent’s death she’s raised by her uncle Ace, leader of the Anarchist group. The Anarchist are treated as villains, but they aren’t really bad guys, it just they don’t like to follow rules. The Renegades also has super powers like Anarchists except they fight for justice by following the laws and they run the government. Nova hates Renegades and she has a personal vendetta against them,  her only goal in her life is to take them down. Adrian Everhart is a Renegade who’s called sketch. He can make anything come to life by his drawing, he just needs to believe it. He likes fighting for justice and being a superhero. When Nova meets Adrian, she was surprised by his kind and fun personality. He wasn’t what she thought he would be but she can’t change the fact that he’s her enemy. Adrian believes in Nova but he doesn’t know that that she’s a Anarchist who’s planning for their demise.

I really liked Nova. She’s strong, determined, and totally kickass. She’s half Filipina and half Italian. Besides her cool power, I also liked her talent to create new gadgets which makes her super cool by the way. Her past was quite tragic, but to be honest it didn’t moved me emotionally because I saw that one coming.  Adrian is pretty likable character. He’s sweet, kind, fun and a very goodhearted guy. His power to make his drawing bring to life is super awesome, I would love to have that kind of power. There is a light forbidden romance between Nova and Adrian but it’s not really the central focus of the story and they’re not a serious couple yet. So I’m really looking forward to see how their relationship progresses further in the next book. As for the secondary characters, I  liked Max the most. He’s a ten year old kid who has a mysterious dangerous power which was a mystery till the end. It’s not really that hard to guess his power, it was too easy. The other characters that I liked are Adrian’s gay dads, Oscar Silva aka smokescreen, and Ruby Tucker aka Red Assassin. My least favorite character in this whole book is definitely Ingrid Thompson, the detonator. Her character irked me from the start.

The plot was good but the middle part seemed slow to me. Although I enjoyed this book, I need to be honest that I was really expecting a fast paced and fully action packed novel and this book was not that. Still, it was an entertaining read and it didn’t disappoint me. I just wish it wasn’t too long. I liked the diverse aspects especially the gay dads who’re super hero’s that’s pretty awesome. I loved the action scenes in the book but I expected  a bit more. I didn’t expect the Anarchist’s group to be so small, they didn’t stand a chance against the vast number of Renegades from the start. This book is filled with plot twists. Some were quite easy to predict but some twists really surprised me. I  loved the writing style. The book was told in dual third person dual POV’s and I enjoyed seeing both side of the worlds. The world the author built was great. It’s close to a dystopian world where normal people without superpowers depend on superhero’s for their protection and everything.

Overall, I really liked this book! It isn’t my favorite read but I did enjoyed it. I liked the characters, the setting, and the concept.  After finishing the book, it was hard for me to choose which side to root for. This book felt like that it was hugely inspired by X-Men. If you’re new to superhero fiction then you might enjoy this book even more than I did. Anyway, the book finally concludes with a surprising twist and I can’t wait to know what happens next.

I highly recommend this book to everyone who loves YA fantasy books. It is superhero fiction so do expect some clichedness and X-men vibes.

So, What do you think of this book? Have you read it yet? If so, are you  a Anarchist or a Renegade?
Please Feel Free To Comment Below. ❤
See You In The Next Post and Have a Great Day! 🙂