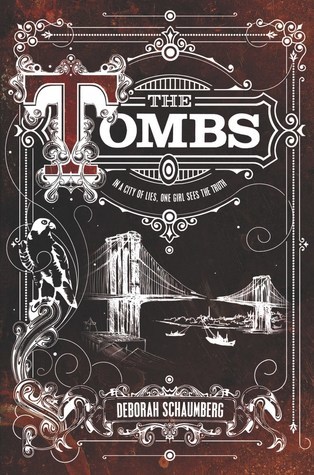 New York, 1882. A dark, forbidding city, and no place for a girl with unexplainable powers.

Sixteen-year-old Avery Kohl pines for the life she had before her mother was taken. She fears the mysterious men in crow masks who locked her mother in the Tombs asylum for being able to see what others couldn’t. Avery denies the signs in herself, focusing instead on her shifts at the ironworks factory and keeping her inventor father out of trouble.

Other than secondhand tales of adventure from her best friend, Khan, an ex-slave, and caring for her falcon, Seraphine, Avery spends her days struggling to survive.

Like her mother’s, Avery’s powers refuse to be contained. When she causes a bizarre explosion at the factory, she has no choice but to run from her lies, straight into the darkest corners of the city. Avery must embrace her abilities and learn to wield their power—or join her mother in the cavernous horrors of the Tombs. And the Tombs has secrets of its own: strange experiments are being performed on “patients”…and no one knows why.

I have mixed feelings about this book. I really enjoyed it but I didn’t love it. The concept of this book was amazing and the world building was a total perfection, but sadly I couldn’t connect with the characters and the pacing seemed slow to me and it literally dragged in the middle. I’m really not fan of slow reads but if you can handle them then you might enjoy it more than I did. I liked the characters, but the romance was totally meh. I love triangles in my YA but this one was awful. Don’t worry, you can still enjoy this book because it wasn’t the central focus of the story. Anyways, For a debut, it was a good start and I hope the next book is much more improved and better.

The story is set in the 18th Century New York, Brooklyn where dangerous gangs roamed around the city and young kids worked in the iron work factory to survive. In this dark forbidden city, Sixteen Year old Avery Kohl lives with her inventor father. She used to live a normal easy life dreaming about going to a collage and marrying a wealthy husband but all of her dreams were collapsed when her mother was taken by the mysterious crow masks who works at the Tombs Asylum, a place for deranged people like her mother who could see something others couldn’t. Now she’s living at Slums and working hard to get back to her old life. When the same symptoms begins to show on Avery, she fears that she’ll face the same fate as her mother. So, she hides from the Crow Masks and struggles to spend her days by working at the Ironworks Factory, hearing the adventurous tales of her best friend Khan who’s an ex-slave, and caring for her pet falcon Seraphine. When  Avery’s power starts to become uncontrollable, she makes an explosion at the factory which creates a huge trouble for her. She believes that she finally needs answers that only her mother can give but she’s in the Tombs. Her father has restricted her to meet her because it was dangerous to her because if she get caught by them then she would get locked up like her mother and face the horrors of the tombs forever. Against her father’s wishes, Avery decides to meet her mother even though it was risky and when she sees the state of her mother, she feels bad that she couldn’t do anything. When she learns about the strange experiments done on the patients, Avery is determined to get her mother out of there with the help of her mother’s people from the gypsy camp.

The characters were good but I can’t seem to connect with any of them. Avery is strong yet Vulnerable. She’s pretty likable character who’s good hearted, compassionate, selfless, and very protective. I really liked her relationship with her fellow factory workers who’re younger than her. It’s pretty sad seeing boys that young working at an iron factory facing all the abuse. The side characters were intriguing but they weren’t fleshed out well enough. I really wanted to know more about Khan and Indigo. The romance was totally meh. Khan and Avery were best friends since young and their relationship is beginning to turn into something more but suddenly comes another guy and bam, she loves him. Even though I like the other guy, I wish it wasn’t so abrupt because it felt quite unrealistic and nonsensical. Anyway, I really liked the boys Geeno, Leo(12), Tony(14), and Oscar(12) but my favorite was Geeno. He’s pretty adorable and a very smart kid. Dr. Spector is a creepy and mysterious villain. He’s only a human but he’s totally giving off the vampire vibes.

The plot was interesting but It didn’t excite me enough to love it. The pacing a bit frustrated me because It really moved a bit slower than expected and I wanted more action. It’s a historical fantasy and the author did a great job in executing the historical and steampunk part but when it came to the fantasy part everything seemed okay-ish but not well detailed. However, I liked the Idea behind this concept and I really enjoyed the Steampunk elements in this book and I had already figured out what’s Avery’s father is building in his secret basement. The writing was good and easy to understand. The story was told in Avery’s first person POV. The world building was amazing and felt authentic, I would give it an A+. I think it’s the major highlight of this book. The author described everything in detail and gave a clear image.

Overall, I liked it but I didn’t love it! Even though It didn’t blow my mind away, I still want to continue this series and hope the next book is much more improved and more action packed.

Despite my issues, I still highly recommend this book to everyone because it’s a case of it’s not you, it’s me. So, definitely give it a shot.

So, What do you think of this book? Have you read this yet? Do you want to read this book?
Please Feel Free To Comment Below. ❤
See You In The Next Post and Have a Great Day! 🙂

16 thoughts on “The Tombs By Deborah Schaumberg [Review]”