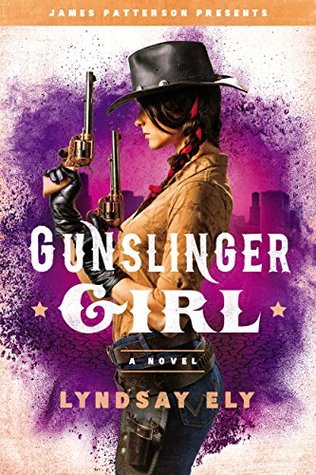 RELEASE DATE: January 02, 2018
AUTHOR: Lyndsay Ely
GENRE: Young-Adult, Dystopia, Western, Adventure.
PUBLISHER: Jimmy Patterson
SUMMARY:  Seventeen-year-old Serendipity “Pity” Jones inherited two things from her mother: a pair of six shooters and perfect aim. She’s been offered a life of fame and fortune in Cessation, a glittering city where lawlessness is a way of life. But the price she pays for her freedom may be too great….
In this extraordinary debut from Lyndsay Ely, the West is once again wild after a Second Civil War fractures the U.S. into a broken, dangerous land. Pity’s struggle against the dark and twisted underbelly of a corrupt city will haunt you long after the final bullet is shot.

I was super thrilled to read this book because it’s a western themed novel set in a dystopian world with a strong female lead.  After finishing the book, I was left pretty much disappointed. It turns out to be quite different from what I was expecting. It was totally a dystopian read with a very light western setting. I tried really hard to love this book, but I can’t. I’m not saying it was a terrible read and many people seems to love it but it just didn’t work out for me. I’ve read tons of dystopian books and this one felt like another typical dystopian read that I’ve read before except for the gunslinger girl aspect which was the only thing I found unique about this novel. Honestly, I enjoyed Rebel of the sands(another western mix novel) way more than this one.

The Story follows seventeen year old Serendipity Jones aka Pity who lives in a shitty world where women don’t have equality. After the second civil war, the west has become dangerous lands, so many women were turned infertile so the fertile women are bartered as prizes between communes as bridal bribes. Since her mother’s death, Pity had led a tough life with her father and two brothers.  Pity was pretty much skilled with guns which she inherited from her mother. After her father forbid her to touch a gun, she always craved for them. When she learns that her father sold her to another colony that needed fertile women, Pity gets pretty much devastated. To avoid the same horrible fate her mother had, she escapes from her colony with her mother’s pair of six shooters which is the only reminder left of her. During her journey when a tragedy takes place Pity finally ends up at Cessation, the last place on the continent where you can do whatever the hell you want. Soon she joins a show business which gives her fame and fortune but soon she gets tangled in underworld politics. When Cessation started to get the best of her, Pity realizes that she needs to get out but the prize she has to pay for her freedom was too great.

I couldn’t connect with any of the characters in this book. Seredipity Jones was an okay-ish character but she didn’t impress me much. I expected her to be strong heroine that kicks ass but instead we get a weak character. Yeah, she’s a good shooter but she really wasn’t that amazing. I was also annoyed with her weird nick name Pity. It sounded totally uncool and stupid. There is a light romance in the book and I’m glad it wasn’t the central focus of the book. I really wasn’t interested in the romance between Max and Pity, it was dull and boring. There is zero chemistry between them. Add to that, the love interest Max was even more boring. His character wasn’t fleshed out well enough, the  only thing that we get to know about him was that he’s a nice guy with piercings on his face and he paints well, but later when the author drops that twist about him, it was the ultimate cliche( I saw that coming).  The secondary characters aren’t fleshed out well either. They aren’t really memorable characters and after finishing the book, I already forgot their names. The only character that stood out for me was Selene, Cessation’s leader. She seemed like a female mafia leader and everyone fears her.

The plot was good but it could’ve been executed even better. The story began with a great start, but after Pity joins the theater show in Casimir the story took a slow turn and then I started to lose my interest. There were some exciting parts that I enjoyed but there were also slow draggy parts that bored me. I was expecting adventure and some bang bang action in desert but instead we get a circus like L.A show and some underworld politics which I did enjoyed btw but seriously, I was expecting more than that. I also forgot to mention this book doesn’t truly have a western feel to it which was the major thing that disappointed me. The writing of the author was pretty good but I need to say that there was a lot of telling but less showing. As for the world building, Lyndsay did create a interesting world but she didn’t provide a strong backstory and in this book, we didn’t get to explore much of this world. So far, we only get to know about Pity’s small commune at east, and Cessation. I’m hoping the next book going to be interesting because Pity has finally  got out of that dump.

Overall, it was an okay-ish read for me! It’s a dystopian read with a western twist. I might’ve given it a 3.5 stars if my expectations weren’t too high on this book. The book concludes with an interesting end and I might give the next book a shot when it comes out but I’m not sure yet.

Despite my issues, I would recommend this book to all the YA dystopia lovers because it might work out for you guys.