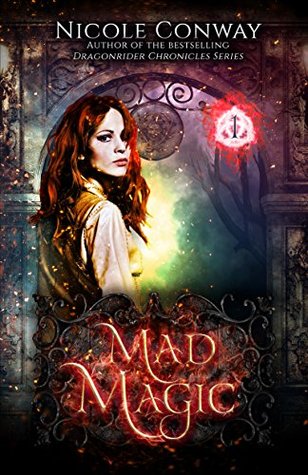 Josie Barton is a high school student living in terror. Invisible creatures torment her everywhere she goes, constantly getting her into trouble at school, and even haunting her apartment. But just when Josie thinks things couldn’t get any worse . . . she meets the guy from across the hall.

Zeph Clemmont is a changeling with enemies in all the worst places, fighting to undo a curse that threatens to end his life. Survival means he will have to swallow his pride and trust Josie with all his darkest secrets.

With the help of a gun-slinging shaman and the enigmatic Prince of Nightmares, Zeph and Josie are only a heartbeat away from defeating one of the most diabolical faerie villains their world has ever known.

Mad Magic was a super fun urban fantasy read with intriguing plot and interesting characters. I totally fell for this book when I first read its synopsis and I knew I had to read it because it has fae and other mythical creatures. I’m total sucker for fae books. The story has captivated me from the start and it was even better than I had expected. It was a perfect entertainer filled with magic, romance, action, and handsome faeries. I haven’t read Nicole Conway’s Dragon Rider series but this was pretty good and definitely a great start for a new series. Although I had some few issues, I immensely enjoyed reading it. The author was very creative and she has done a great job in weaving this story. I really can’t wait to know what she has in store for us next.

The story follows a seventeen year old high school student Josie Barton whose parents has been died when she was young. She’s been taken care by an anonymous guardian named Ben. She’s always a social pariah in her school because of her weird hallucinations of monsters which always gets her into trouble. Something invisible haunts her Apartment but Josie can’t tell anyone about it because she didn’t want to end up in a mental asylum. When something invisible attacks her, her handsome neighbor across the hall comes to her rescue. Josie finally learns that the monsters she’s been hallucinating are actually real and the guy named Zeph who came to her rescue wasn’t even human. Zeph Clemmont is a changeling who’s been fighting a curse that threatens to end his life. He works as a bounty hunter for a shaman and he’s surrounded by so many enemies. He leads a dangerous life and he doesn’t want to drag Josie into it but when a powerful evil faerie brings a huge threat to both faerie and human realm, Josie, Zeph and an unlikely ally team up together to defeat him.

I loved all the characters in the book! Josie isn’t really my favorite protagonist but I did enjoyed her character. She’s vulnerable yet strong. At the beginning, she did seemed like any other typical YA heroine but eventually I found myself liking her. I loved her character development. She’s started as a weak and naive character but she doesn’t want to be a useless damsel in distress so she struggles hard to become strong. Zeph is a mysterious and captivating character. I loved his fun attitude and cool personality. He has some beautiful magical runes on his body which glows whenever he uses his power. He loves honey, he turns into a crazy fae in front of a honey bottle. He’s very protective of Josie and he wouldn’t mind sacrificing his life to save her.  There’s also another handsome fae named Eldrick. He’s a Prince of Nightmares and also one heck of a swoon worthy guy. I absolutely loved his character because I’m into broody guys. He doesn’t trust humans because of his bitter experience with them in the past. He mostly keeps to himself, and he loves food and coffee.  There’s also an interesting side character named Hank who’s a shaman. He’s owner of a bar and also Zeph’s boss. As for the relationships, I enjoyed the romance between Zeph and Josie but it looked kinda insta-love-ish because they both develop feelings for each other pretty quickly. I didn’t minded the age gap between them but some readers might feel a bit uncomfortable with a seventeen year old girl with a guy who’s somewhere in his mid twenties. I also enjoyed the friendship between Eldrick and Josie and how they grew to trust each other. I loved their every interaction and Eldrick definitely makes a great roommate. There’s no triangle in this book but I thought there’s going to be one. The faerie villain in this book looks totally alluring on the outside but inside he’s totally evil.

The plot was very interesting and engaging! Even though some parts were predictable, It was a well written plot. The story moved in a fast pace. From the start, I was hooked to the plot and it never left me bored. I enjoyed the unexpected twists and turns, and also the action in the second half. This was my first book by Nicole Conway and I loved her writing style. The whole book was told from Josie’s first person POV. The world building was pretty great. Nicole created a modern world where mythical creatures from faerie world lives alongside humans. The entire book was set in human world but I was hoping for a glimpse into a faerie realm. I loved the magical system in this book especially the intricate spellworks and how they work.

Overall, I loved this book and every aspect of it. It might not be a total perfection but it was a great read. It has intriguing characters, great character/plot development, interesting magical system, and kickass action. There’s no cliffhanger at the end but I’m still very eager to read the next book.

I highly recommend this book to everyone who loves action packed YA Urban fantasy read and also to the readers who loves fae novels.