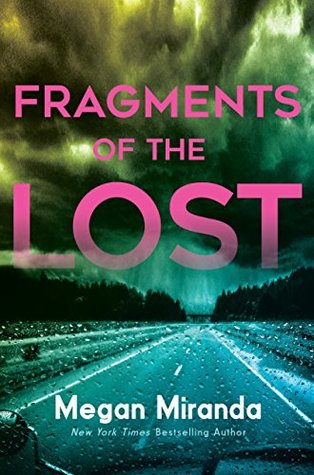 RELEASE DATE: November 14, 2017
AUTHOR: Megan Miranda
GENRE: Young-Adult, Contemporary, Mystery.
PUBLISHER:Crown Books for Young Readers
SUMMARY: Jessa Whitworth knew she didn’t belong in her ex-boyfriend Caleb’s room. But she couldn’t deny that she was everywhere–in his photos, his neatly folded T-shirts, even the butterfly necklace in his jeans pocket . . . the one she gave him for safe keeping on that day.

His mother asked her to pack up his things–even though she blames Jessa for his accident. How could she say no? And maybe, just maybe, it will help her work through the guilt she feels about their final moments together.

But as Jessa begins to box up the pieces of Caleb’s life, they trigger memories that make Jessa realize their past relationship may not be exactly as she remembered. And she starts to question whether she really knew Caleb at all.

Each fragment of his life reveals a new clue that propels Jessa to search for the truth about Caleb’s accident. What really happened on the storm-swept bridge?

I loved Megan Miranda’s debut novel Fracture and this is my second book by her. Fragments of Lost was pretty interesting to read but sadly, it didn’t thrill me as much as I expected. The reason I picked this up because of its intriguing premise which sounded very much promising.  The characters and the plot was pretty good but my main issue lies with the slow start which made the story a bit less exciting for me. However, the mystery is hard to guess which is the only thing that held my interest until the end of the book.

The story follows Jessa Whitworth whose ex-boyfriend Caleb dies in a car accident at a storm swept bridge. Caleb’s mother blames her for his death and Jessa feels guilty that she might be right because the last time she saw him, she has broken up with him. When Caleb’s mother asks her to pack up Caleb’s things from his room, Jessa agrees and believes she deserves this punishment. She knows she doesn’t deserve to be in his room but it’s the only way she could find the reason behind his death. Everything in his room is linked to her such as the photos, T-shirts and her butterfly necklace that she gave him for safe keeping on that day. Each thing triggers the memories she had with him and she finally starts to realize that their relationship may not be exactly as she remembered and as she discovers new things about him, she starts to wonder how much she knew about him. With each new discovery, Jessa gets even more curious about Caleb’s accident and she needs to find the answers without getting his mother suspicious of her actions.

Jessa is a great main protagonist. She’s smart, strong, and very determined person who’ll not give up until the end. Her ex-boyfriend’s death has turned her pretty much heart broken and I felt a bit bad for her situation but I’m glad she still stood strong and searched for the answers that she deserved to know. As for the supporting characters, I loved Caleb’s best friend Max. He’s such a sweet guy and I really liked the friendship between him and Jessa. I totally ship them! They work together to find the answers for Caleb’s death. Caleb was a pretty complex character. From the start, I found him a bit strange and I didn’t liked him. I wish I could say more about him but it might be a bit spoiler-ish. Caleb’s mom is a cruel bitch and also a bit crazy. From the beginning, her strange behavior made me suspect that she was hiding something and I really wanted to know why she wanted Jessa to clean out her son’s room.

The plot was interesting and mysterious but the slow start was a bit turnoff for me. The mystery in this book unfolds very slowly. The first half of the story was focused on the flashbacks of Jessa’s relationship with caleb and how it was finally ended. To be honest, I started to enjoy the book only after I’m halfway through the book. There are so many twists and turns in the second half that made the story even more suspenseful. The final revelation was totally unpredictable. There is a light romance in the book and I’m so glad that it wasn’t the central focus of the book. I enjoyed reading the book from Jessa’s perspective and seeing how she slowly unveils the mystery behind her ex-boyfriend’s mysterious accident. I absolutely loved the writing, It was captivating and addictive.

Overall, It was a good read and I liked it but it’s not my favorite. If you like mysteries with slow starts then you’ll definitely enjoy this book more than I did.

Despite my issues, I highly recommend this book to everyone but don’t expect it to thrill you from the start.

13 thoughts on “Fragments of the Lost By Megan Miranda [Review]”