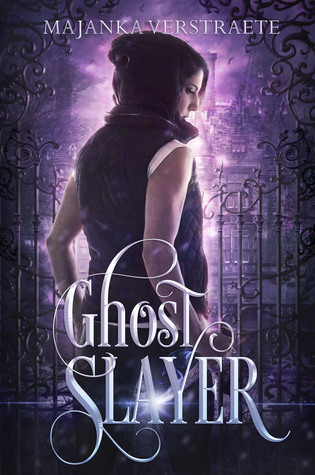 Twenty-one-year-old Kaelyn has spent half her life hunting ghosts and killing them. But she’s not like the other ghost hunters who have to rely on spells and curses to banish ghosts back to where they came from, hoping that they don’t come back. When Kaelyn kills a ghost, they stay dead.

But in Mortimer Hall, a behemoth of a house, Kaelyn is about to face the most powerful and life-threatening ghost she ever met, and what she doesn’t know is that the ghost has been waiting just for her…

Okay, I requested this book on netgalley because it sounded interesting. Besides fantasy, Sometimes I also like to read ghost hunting paranormal books so I thought “why not give it a shot?” After finishing this book, I felt this was an Okay-ish read. This is one of those books that you read for fun and entertainment. Ghost Slayer was an enjoyable read with some ghost hunting and some spooky stuff, but honestly it wasn’t as creepy and scary as I hoped because I’ve read books way more creepier than this one. The plot was interesting but It would’ve been great if the author has provided more info on ghost slayers and the exorcists. The characters were not bad but I wish the protagonist Kaelyn wasn’t so annoying.

The story follows twenty-one year old ghost slayer Kaelyn who’s been ghost hunting since she was young. she lives alone with her ghost mom and to survive, she hunts ghosts like some kind of part time job. She doesn’t use any spells or witchy stuff like other ghost slayers, She just uses her dagger to kill the ghosts. Every ghost she has killed stayed dead forever and they never resurface.  She studies parapsy-chology in college and when her whole class goes to Mortimer hall for a study trip, she decides to go along with them but they aren’t aware that some evil ghost is haunting that place. After entering the Mortimer Hall, Kaelyn realizes that she just lost her ghost sensing powers. When things take a turn for worse, Kaelyn has to use her ghost hunting skills to save her friends before they get killed but she didn’t expect the ghost to be so powerful and deadly. When Kaelyn searches for clues and the history of the place, so many buried secrets are finally revealed including the one she has buried in her memory.

Although I enjoyed the story, I can’t connect with the characters. I expected Kaelyn to be a badass slayer but she totally wasn’t, and add to that she was kind of annoying too. Her attraction to her ex-love Alex always made me roll my eyes. She seriously hates the guy for something he has done in the past but she can’t stop the butterflies in her stomach whenever he was near *clichéd much*. Alex is smug and arrogant character.  He isn’t a ghost slayer but he banishes ghosts with his spells. I actually liked this guy until he started to act like the know-it-all guy. He didn’t have much part in this book but I really liked Kaelyn and Alex as a team. Professor Logan, Kaelyn’s teacher from her para-psychology class is a guy with so many secrets. From the start, I had suspected that he was hiding something and his revelation totally surprised me. The secondary characters in this book aren’t interesting enough to describe. They didn’t do much in the story besides being the hostages.

The plot was good but I think it could’ve been executed even more better. Though it wasn’t too spooky enough to scare me, I like the mystery and all the thrills and chills it gave. The pacing was good and I didn’t feel bored because the story kept me engaged through out. There are some unexpected twists which really surprised me. It was a short story and some scenes felt a bit rushed especially the ending part. Nonetheless, it has a satisfying end. The story was told from Kaelyn’s first person POV. The writing was not bad but it definitely needs some improvement. I loved the setting! I liked how the author build a dark and creepy atmosphere in the story.

Overall, it was a good read but nothing amazing! Despite issues, I had fun reading it! The book finally concluded with no cliffhanger but it does left some unanswered questions . I’m not sure whether I’m gonna pick up the next book when it releases but we’ll see.

I would recommend it to the readers who are looking for a quick fun and spooky paranormal read. If you’re looking for something serious steer away from this book.

So, What do you think of this book? Have you read this yet? Do you want to read it when it finally releases?
Please Feel Free To Comment Below. ❤
See You In The Next Post and Have a Great Day! 🙂