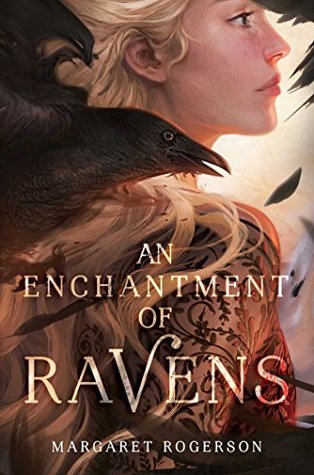 A skilled painter must stand up to the ancient power of the faerie courts—even as she falls in love with a faerie prince—in this gorgeous debut novel.

Isobel is a prodigy portrait artist with a dangerous set of clients: the sinister fair folk, immortal creatures who cannot bake bread, weave cloth, or put a pen to paper without crumbling to dust. They crave human Craft with a terrible thirst, and Isobel’s paintings are highly prized. But when she receives her first royal patron—Rook, the autumn prince—she makes a terrible mistake. She paints mortal sorrow in his eyes—a weakness that could cost him his life.

Furious and devastated, Rook spirits her away to the autumnlands to stand trial for her crime. Waylaid by the Wild Hunt’s ghostly hounds, the tainted influence of the Alder King, and hideous monsters risen from barrow mounds, Isobel and Rook depend on one another for survival. Their alliance blossoms into trust, then love—and that love violates the fair folks’ ruthless laws. Now both of their lives are forfeit, unless Isobel can use her skill as an artist to fight the fairy courts. Because secretly, her Craft represents a threat the fair folk have never faced in all the millennia of their unchanging lives: for the first time, her portraits have the power to make them feel.

“Why do we desire, above all other things, that which has the greatest power to destroy us?”

This book has totally enchanted me! An Enchantment Of Ravens was one of my highly anticipated books of this year and I can’t say how much I was excited to read it. It was an amazing fae novel with a perfect artsy cover by Charlie Bowater. Honestly, this book was as beautiful as its gorgeous cover and it met all of my expectations. I loved it as much as I enjoyed ACOTAR but these two are definitely unique in their own way. Seriously, this was a beautifully written story and the lyrical writing style makes it even more captivating. I can’t believe this was actually a debut novel of Margaret Rogerson and she did a tremendous job weaving this story quite beautifully. Except for few issues, I loved every part of it. I loved the characters, the world, the romance, and the beautiful writing style. I really wish it was a series or maybe even a duology because I don’t want this to end so soon and I want more.

“When the world failed me, I could always lose myself in my work.”

The story starts in a small town called Whimsy where the season never changes and humans are aware of fairies existence. The fae don’t mingle with mortals much but they do thirst for humans crafting skills which they don’t possess. The fae visit Whimsy whenever they’re need of humans craft services and in exchange for their services they provide payment in the form of enchantments but one must to be careful while dealing with a fae because the enchantments might turn badly if you aren’t very specific about it. Isobel is a young gifted portrait artist and well known for her skills in all the fae courts. When she learns that the legendary autumn prince is paying a visit to her, she really can’t believe it. During their every meeting, they don’t talk much but she can see the sadness through his eyes which she perfectly portrays it in her painting and it soon becomes her greatest mistake. To fae folk, showing emotions is considered a weakness. When the fae views the portrait of Rook they think he has become weak and isn’t strong as they thought he was which makes Rook pretty much furious and he confronts Isobel for her treachery and drags her reluctantly to the autumnlands to stand trial for her crime. In midst of their journey, they face many dangerous obstacles but their greatest obstacle is the developing feelings between them because a relationship between a fae and a mortal is totally forbidden and the consequence of breaking this law is death. Now Isobel needs to use her skill to survive the fair folk and also the alder king, who rules them all.

“I quite like eggs,” I replied firmly, well aware that the enchantments he described would all turn strange and sour, even deadly, in the end. Besides, what on earth would I do with men’s hearts? I couldn’t make an omelette out of them.”

I enjoyed all the characters in this book especially Isobel and Rook. Isobel is a pretty much likable character. She’s smart, talented, sweet, selfless, and a very determined person till the end. She would never exchange her art and her humanity for any wealth or immortality. I absolutely loved Rook! He’s totally a swoon worthy fae who has a shape shifting ability to turn in to any animal. I loved his adorable, cocky, and fun personality! I enjoyed the way he was fascinated with human’s craft and also Isobel. He acted like a jerk towards Isobel when he sweeps her away from her home but we can pretty much see that he was also fighting against the feelings inside him. I loved the romance between Isobel and Rook even though It seemed a bit insta-love-ish at the beginning because they do develop feelings quickly and I really wish there was a bit more interaction between them. Nonetheless, I still enjoyed how their relationship bloomed later. After the portrait incident, the romance between them turns into a hate-love thing. I quite enjoyed how they love to get on each other’s nerves.

As for the supporting characters, I liked Gadfly, Isobel’s Aunt Emma, and her two sisters March and May. Gadfly is kinda weird and a mysterious fae who’s been visiting Isobel for her art since she was young. Even though he’s a secondary character, he played a major role in this book. Emma, Isobel’s aunt is a sweet, caring and compassionate character who wouldn’t hesitate to fight against a fae to save her niece. March and May are both twin little sisters of Isobel. They’re both kinda troublemakers who loves doing fun things and I really enjoyed their characters.

“You are like a living rose among wax flowers. We maybe last forever, but you bloom brighter and smell sweeter, and draw blood with your thorns.”

I loved the plot! It was beautifully written with a gorgeous prose that’ll not fail to captivate you. The story was really quite addictive and totally refreshing! I wasn’t able to put this down even for a second. This book is definitely a great treat for all the fae lovers. The fae folks mentioned in it are close to the original folklore like how they can’t lie and how they use glamour to hide their true face, how they can’t create craft, and how Iron kills them. The fae in this book are devoid of emotions and they’re also bound to some mannerisms. The most funniest thing that I liked is the curtsy thing which I haven’t found in any fae book. It seemed very funny how they can’t stop themselves to bow in response to Isobel’s curtsy. The ending was pretty clever though but I really expected it to end with a bang. Nonetheless, it was a satisfying ending. The pacing of the plot was good and I totally fell in love with the author’s beautiful writing style which was quite descriptive and vivid. It’s one of the greatest aspects of this book. The whole story was told from Isobel’s first person POV and I loved seeing everything through her eyes. The world building was simply amazing!  l loved the way the author created this world especially the fae world where everything is not what it seems. I really really want to explore more of this world. The author also mentioned something about a world beyond but sadly, we never have a glimpse of it.

“Is that so terrible? You say it as though it’s the most awful thing you can imagine. It isn’t as though I’ve done it on purpose. Somehow I’ve even grown fond of your – your irritating questions, and your short legs, and your accidental attempts to kill me.”

Overall, this was a fantastic read! It makes me quite happy that it didn’t disappoint me because the mixed reviews made me worried a bit and I really had super high expectations on it. It’s truly a perfect package of entertainment filled with magic, fae politics, art, adventure, romance, and some action. For a debut, this was an amazing start. It’s too bad that it was only a stand alone novel but anyways, I’m pretty much excited to know what the author has in store for us next.

Rook gave me a charming smile. I glared back at him.
“I’ll use iron on you!”
“If you must,” he said sufferingly.
“I really will!”
“Yes, I know.”
I became conscious of the fact that his chest felt very solid, and I was straddling his slim waist. Our uneven breathing rocked us against each other slightly. Molten heat pooled in me again, ebbing lower.
I didn’t use iron on him.
Instead, I leaned down and kissed him.

I  highly recommend this book to everyone including the readers who hated ACOTAR. I really hope everyone gives it a shot.

So, What do you think of this book? Have you read this yet? Do you want to read it?
If you had read this book, what things did you liked about it?
Please Feel Free To Comment Below. ❤
See You In The Next Post and Have a Great Day! 🙂

25 thoughts on “An Enchantment of Ravens By Margaret Rogerson [Review]”