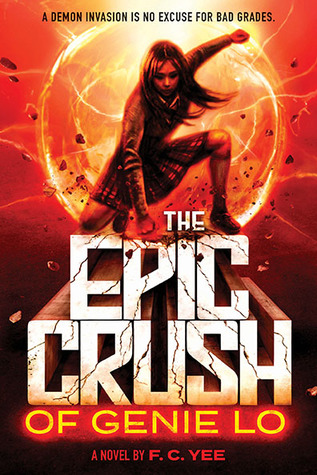 RELEASE DATE: August 8th 2017
AUTHOR: F.C. Yee
GENRE: Young-Adult, Fantasy, Mythology, Fiction.
PUBLISHER: Amulet Books
SUMMARY:
The struggle to get into a top-tier college consumes sixteen-year-old Genie’s every waking thought. But when she discovers she’s a celestial spirit who’s powerful enough to bash through the gates of heaven with her fists, her perfectionist existence is shattered.

This epic YA debut draws from Chinese folklore, features a larger-than-life heroine, and perfectly balances the realities of Genie’s grounded high school life with the absurd supernatural world she finds herself commanding.

This was totally an entertaining read! I’ve been pretty much excited to read this book when I first heard about it. This book was actually based on a Chinese folklore The Monkey King and Journey to the west. I don’t have deep knowledge on the original tale but I did know about it thanks to the movie adaptations like Journey to the west, and the monkey king. Even if you’re not familiar with the tale that’s totally okay because you’ll still gonna enjoy reading it because there’s lots of demon ass kicking in this book. It’s really a refreshing story filled with lots of fun, humor, action and romance. For a debut novel, it was a pretty impressive work and I look forward to read more books from the author.

The story follows sixteen year old Genie Lo, an american-Chinese girl whose major goal is to get into a top tier college and leave her small hometown Santa Firenza that she’s lived her whole life. One day, while Genie was on her way to school, she witnesses six guys beating up on a guy and tries to help him but she isn’t strong enough to fight against all of them so she flees from there. In the class, she sees the same guy whom she tried to save but surprising he doesn’t have a single scratch on his face. He is the new transfer student named Quentin Sun and he loves to stalk her everywhere she goes. When a demon suddenly appears out of nowhere, Quentin comes in time to rescue her by destroying it. Later Quentin reveals that he’s a monkey king and he states that demons really exists. When he claims that Genie is a celestial spirit who possess a strong power that could destroy even heaven’s gates, she doesn’t believe him at all and thinks he’s mad until he proves her wrong which turns her whole world upside down. When more demons starts to appear they both need to work together to fight against them before they destroy the whole town. Fighting demons might save the people in Genie’s hometown but unfortunately, they don’t help her get her into an Ivy League so she still needs to work on it.

I really liked Genie! She’s  fun, smart, snarky and head-strong. She’s also very tall and plays in her school’s volleyball team. I think many readers will definitely enjoy her character. She’s a relatable character and most of her reactions seemed quite realistic for her age.  It was fun watching how she struggles with her school life while fighting the demons. Quentin is a pretty enjoyable character. He’s super hilarious and totally entertaining. His smug and cocky personality always makes Genie mad but she can’t deny that he’s got handsome looks and a hot bod. The relationship between Genie and Quentin is pretty fun and together they’re totally hilarious. Their height differences makes them a refreshing couple. I enjoyed the romance between them even though it seemed a bit cliched. The secondary characters that I liked are Genie’s mom, her classmate/best friend Yunie. I loved the friendship between Yunie and Genie. I wish we had more Yunie in the plot because she was so much fun and I loved her sense of humor.

The plot is unique, interesting and engaging!  It’s a fast paced plot and there’s never a boring moment through out. It’s a good story and I’m glad it was also focused on family relationships and friendship. The quirky humor makes the story even more fun. From the start, I actually felt like I was reading a chinese comic. I quite enjoyed the action parts especially the final showdown which was my favorite. The whole story was told from Genie’s First person POV. I loved the witty writing style of the author which is one of the great aspects of this book. The whole story was placed in Santa Firenza but I wish we had a glimpse on the Heaven where Jade emperor lives.

Overall, I loved it! It’s a perfect package of fun and entertainment. The book finally concludes with a perfect ending. If there’s ever a sequel to this book I would definitely read it.

I highly recommend this book to all the readers who are looking for a fun read!