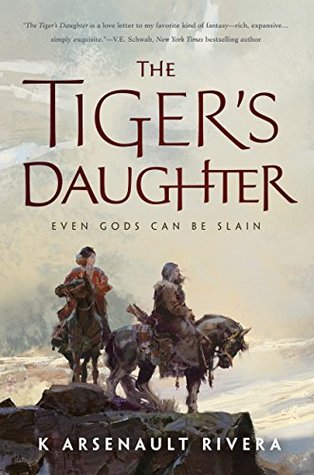 Even gods can be slain….

The Hokkaran empire has conquered every land within their bold reach―but failed to notice a lurking darkness festering within the people. Now, their border walls begin to crumble, and villages fall to demons swarming out of the forests.

Away on the silver steppes, the remaining tribes of nomadic Qorin retreat and protect their own, having bartered a treaty with the empire, exchanging inheritance through the dynasties. It is up to two young warriors, raised together across borders since their prophesied birth, to save the world from the encroaching demons.

This is the story of an infamous Qorin warrior, Barsalayaa Shefali, a spoiled divine warrior empress, O-Shizuka, and a power that can reach through time and space to save a land from a truly insidious evil.

*ARC received from the Publisher Via Netgalley in exchange for an honest review.*

This is really a solid historical fantasy read but I think it isn’t for me! This is a serious case of it’s not you, it’s me. To be honest, I really liked the story but sadly, I had lots of issues with it. I wasn’t able to connect with the characters and I struggled reading this from a second person perspective which I’m not familiar with and also it’s my least favorite POV. This book mostly seemed like a prequel because the entire story is a letter written by Shefali to Shizuka about how they first met and also their adventures when they were young. There is also lots of info dump in the book that has made it difficult for me to grasp everything. However, despite my issues with this book, I really think it was a great debut and I’m certain many people would love it. This is a mature fantasy novel definitely not suitable for young adults.

The Tiger’s Daughter is a forbidden love story and adventures of O-Shizuka, princess of Hokkaro and  Barsalayaa Shefali warrior of Qorin. Because of a prophecy, both Shizuka and Shefali have been raised together. They’re both childhood best friends since both of their mothers are also friends. Their relationship never wavered despite their opposite backgrounds instead it grew into something more. The Hokkaran’s has conquered every land they could reach and they doesn’t mingle with outcast tribe Qorin because they see them as nothing but dark skinned barbarians. The emperor of Hokkaro is a prideful, coward, and cunning man who failed to produce an heir which makes Shizuka, his niece the last heir to the Hokkaran empire.  When blackbloods start lurking around the villages making havoc everywhere threatening their very existence, Shizuka and Shefali team up together to kill them.

The main characters Shefali and O-Shizuka are pretty good characters but sadly, I can’t seem to connect with either of them. Shizuka is a stubborn and spoiled princess who is a skilled fighter that loves adventure. Shefali is a brave, shy and fierce warrior and complete opposite to Shizuka. Honestly, I liked Shefali more than Shizuka. She’s not reckless like Shizuka but I admired their friendship and how deeply they care for each other. The lesbian/gay relationship in Hokkaran is forbidden but O-shizuka doesn’t give a shit about them because she’s  not a rule follower. I wish I could say that I enjoyed the  forbidden romance between Shizuka and Shefali but I didn’t because Insta-love isn’t my thing. They both have so much love for each other but I didn’t feel any sparks or tension between them which is a bummer.  There is also other lesbian relationships in this book but I don’t want to spoil the story for you. I also liked  secondary characters like Shefali’s cousin Otgar, and her mother Burqila.

The plot is good but it’s too slow for my taste and there isn’t much badass action as I thought there would be. It would’ve been great if there was more demon killing. The story mainly focuses on familial relationships, lesbian relationship, different cultures and some royal politics. My major reason for not loving this book is that the whole book is a long letter from Shefali to Shizuka and I was quite annoyed reading the story from second person POV.  More than half of the book is slow paced and it’s also a pretty long book which made things even worse for me. The only part that I loved in this book is the last 20 percent of it where we finally get the real action. The writing is quite beautiful and lyrical. I liked the world the author created which is the best aspect of this book but it took some time for me to understand everything because there is lots of info dumping at the beginning and  my mind wasn’t able to handle all of them at once. It was pretty easy to guess that Hokkaran, Qorin and Xianese are based on Japanese, Mangolian and Chinese culture. Some people found this book racist especially some Asian readers. Personally, I don’t have great knowledge on all of these cultures but there are a few words that did seemed a bit racist to me such as words like rice tongue and flat faced.  This book mostly felt like historical read but there are some fantasy elements in it that I really liked such as creepy demons, flesh eating blackbloods and some unknown magic that runs inside the main characters.

Overall, it was an okay read for me and also pretty good for a debut novel! The book finally concludes with an interesting cliffhanger and I’m not sure whether I would read the next book or not but I hope it’s even better than this one.

Even though I didn’t loved this book, I would definitely recommend it to everyone. Despite my issues, I really think it’s a good fantasy read. If you’ve no problem with slow paced plots written in second person POV then go ahead I’m sure you would love it.