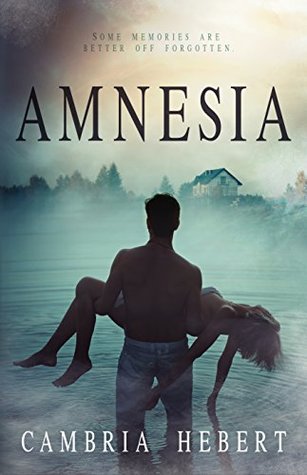 RELEASE DATE: June 10th 2017
AUTHORS: Cambria Hebert
GENRE: New-Adult, Mystery, Contemporary, Romance.
PUBLISHER:  Cambria Hebert, LLC
SUMMARY: I washed ashore in a little lake town.
A place where everyone knows everyone, yet…
No one knows me.
I don’t know me.
If a woman doesn’t know her own name, does she really exist?
I don’t know my natural hair color, my birthdate, or where I live.
I am invisible.
To everyone, to everything, even to myself.
Except to him.
I see the recognition deep in his stare, the way it lingers on my face as if I’m a puzzle he’s desperate to put together.
I just want answers, the truth… knowledge.
His lips are sealed. Still, his eyes beguile me. I can’t trust anyone, not even myself. Someone wants me dead, the same someone who tried to bury me in a watery grave.
They’ll come for me again… I won’t know their face.
I don’t even know mine.
I am amnesia.

Cambria Hebert is  quite famous for her Hastag series which I haven’t read yet but I really wanted to for a long time. When I first saw the synopsis of Amnesia, I knew I had to read it because it sounded so thrilling. It is really a good contemporary romance but sadly, It was not as thrilling as I thought it would be. I had two major issues with this book which made me not love it. Firstly, The insta-love romance in this book really annoyed me because it seemed so unrealistic. The mystery and suspense in the plot didn’t excite me and it also lacks tension. The plot twist at the end is not hard to guess because I saw it coming from the start. When I picked this up I was expecting a slow burn romance and a heart pounding mystery that is hard to guess which this book failed to deliver. However, I still think it wasn’t a bad read because It wasn’t totally boring. I’m quite certain that so many contemporary romance lovers would definitely devour this book and I’ve seen so many people already loving it.

A young woman is washed ashore at a lake city with no memory and she’s saved by a guy named Edward who’s gaze tells her that he recognizes her. She doesn’t remember her own name and what happened to her but the bruises and the injuries on her body tells her that she was severely abused. Because of her memory loss, she names herself as Amnesia. Edward can’t believe his eyes when he saves a girl who looks like his first love that he lost eleven years ago. The guilt of losing her is still haunting him and now he doesn’t want to lose her once again even though everyone says that she isn’t the same girl. With each day, Amnesia and Eddie create a deep emotional connection with each other and grows more closer.  Meanwhile someone from her past is out there lurking around the lake city. They want her dead. Amnesia doesn’t remember her abuser’s face and when she finally have a glimpse of her horrifying past, she doesn’t want to remember.

Amnesia and Edward are both complex characters but unfortunately, I can’t connect with either of them. Amnesia is a pretty likable and sweet character. She wasn’t great but she wasn’t bad either. I felt bad for her after learning her horrifying past and what she has gone through at the hands of her abuser is a total nightmare. Edward is a total sweet heart at the start but when he started to show his alpha protective obsessive self, he slowly became unappealing to me. The romance was the major let down for me. Yeah, it was beautiful and emotional but the way their relationship started seemed quite unrealistic. Edward is a total stranger to Amnesia and when she meets him for the first time after waking up from a coma, her first thought is how hot he is and she trusts him way too quickly. They both act like they’re not strangers to each other and from there, their relationship became quite predictable. If you’ve no problem with insta-love then you might love this one. The side characters are okay but they aren’t memorable enough to describe.

The plot is interesting but if you’re into mysteries and psycho-thrillers, it would be easy to guess the twist with the hints provided from the start.  The book really started with a great start but as the story progressed, It began to go downhill and I started to lose my interest. Most of the story is focused on the romance between Amnesia and Edward. I already guessed some parts and all of my suspicions came true when they’re finally revealed which is a total bummer but the ending really piqued my interest. As for the writing style, I loved it. It was totally addicting through out and it’s definitely the best aspect in this book. I enjoyed the dual POV’s of the book but I think the story would’ve been more mysterious if it was told in only Amnesia’s POV.

Overall, it was a good romance thriller but not something that will blew your mind away. The book ends with a cliffhanger and I’m curious enough to check out the next book which is the final book in this duology.

Despite my issues, I highly recommend this book to everyone who loves to read NA contemporary romance.