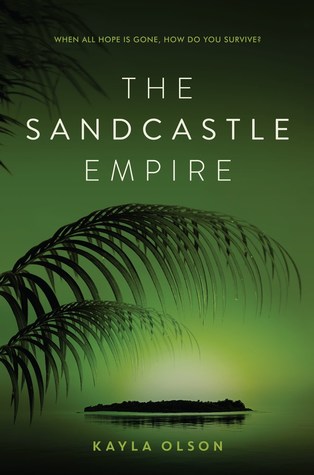 Before the war, Eden’s life was easy—air conditioning, ice cream, long days at the beach. Then the revolution happened, and everything changed.

Now a powerful group called the Wolfpack controls the earth and its resources. Eden has lost everything to them. They killed her family and her friends, destroyed her home, and imprisoned her. But Eden refuses to die by their hands. She knows the coordinates to the only neutral ground left in the world, a place called Sanctuary Island, and she is desperate to escape to its shores.

Eden finally reaches the island and meets others resistant to the Wolves—but the solace is short-lived when one of Eden’s new friends goes missing. Braving the jungle in search of their lost ally, they quickly discover Sanctuary is filled with lethal traps and an enemy they never expected.

This island might be deadlier than the world Eden left behind, but surviving it is the only thing that stands between her and freedom.

This book was pretty interesting to read! It’s been a long time since I’ve read a YA dystopian book with survival aspect and I’ve heard pretty good things about this book so I wanted to give this a shot. The sandcastle Empire intrigued me from the start with the mystery surrounding the story and also the wonderful setting. The whole exploring and survival in the jungle is the best part that I enjoyed the most in this book. The only thing that disappointed me was the ending. I expected this story to end with a bang but not a fizzle. Apart from that it was quite enjoyable read and a good debut.

The story is set in a post apocalyptic world where the whole world is devastated by floods and tsunami’s which lead to chaos everywhere. When the government fails to control the citizens, the powerful group called the wolfpack  takes complete control over them and created gulags which separated families. People who tried to defy them are never seen again. Seventeen Year old Eden is one of the survival who was kept in one of the wolfpack’s work camp. She’s been planning to escape from the camp for a long time and when the opportunity finally comes by the sudden explosion in the camp, She along with the other three survivors flees from there in a sailing boat. Together  they set on a journey to find sanctuary Island, a safe place of refuge where Wolfpack has no control of. With the help of Eden’s father’s journal which contains detailed directions to the island, they finally reach it. But after one of them goes missing, they all go on a search to find her missing friend in the lush jungle and during their search, Eden discovers that the sanctuary is filled with so many secrets that she never expected and surviving it is the only thing that stands between her and the freedom she so desperately craves.

Eden is a strong protagonist! She’s a brave and selfless character who’ll do anything to fight for her freedom and never gives up hope. Even though I wasn’t able to connect with her, I really liked her character in this book. I really admired her helping nature towards others. The other supporting characters Finnley, Alexa and  Hope are pretty good too. I liked Alexa and Hope but I was a bit annoyed with Finnley’s character. There is a light romance in this book which felt like insta-love but I wasn’t bothered with it much because it isn’t the major focus of the book. I wish I could say more about the other characters in this book but I don’t want to spoil the story for you.

The plot is pretty much engaging, suspenseful and mysterious! I was hooked to the story right from the very start and as the story slowly unveils the secrets, it becomes more interesting to read but there are few parts that felt dragged though. I really enjoyed the characters and the thing they ate at the beginning to survive grossed me a bit but they’re not puke worthy enough. There are so many twists and turns in this book. While some were pretty predictable, most of them really surprised me. The story kept me on my toes from the start till the end. As I already said above I didn’t liked how the ending was executed but other readers might have no problem with it. I loved the writing! For a debut author, the writing is amazing! It was quite descriptive and vivid.  I enjoyed reading the story from Eden’s Perspective and seeing everything through her eyes. I loved the world building! It was creative and smart. I liked the way she described every detail of the lush jungle and I pretty much enjoyed exploring through it.

Overall, I really liked it! The book finally concludes with a satisfying conclusion but the ending could’ve been much better otherwise I would’ve given this a four star.

I highly recommend this to everyone who likes to read YA survival stories filled with adventure and action.

18 thoughts on “The Sandcastle Empire By Kayla Olson [Review]”