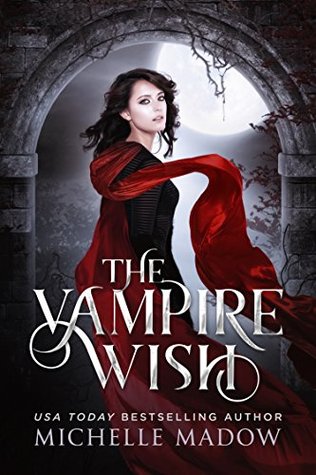 He’s a vampire prince. She’s a human blood slave. They should be enemies… but uniting might be their only hope to prevent a supernatural war.

Annika never thought of herself as weak—until the day vampires murdered her parents and kidnapped her from our world to the hidden vampire kingdom of the Vale.

As a brand new blood slave, Annika must learn to survive her dangerous new circumstances… or face imminent death from the monstrous wolves prowling outside the Vale’s enchanted walls. But not all in the kingdom is as it appears, and when a handsome vampire disguised as a human steps into her life, Annika discovers that falling for the enemy is sometimes too tempting to resist.

Especially when becoming a vampire might be her only chance to gain the strength she needs to escape the Vale.

The Vampire Wish is a very unique read! It’s a twilight meets Aladdin! I love Twilight and Aladdin! I’ve never read an Aladdin retelling but I’ve read some twilight retellings so I was very eager to get into this story since I read its intriguing synopsis. Well, Is it as amazing as it sounds? Sadly, no. I enjoyed the story but I didn’t love it as much as I expect to. I’ve had few issues with the plot execution and characters which hindered some of my enjoyment. I’m not saying it wasn’t good because it’s really an entertaining read if you’re looking for something short fun tale. I know a lot of people who loved it though, so my issues could be on my side.

The book starts with Annika skiing with her family but suddenly her whole world turns upside down, when vampires appears out of nowhere and kills them. Now Annika is the blood slave in an hidden enchanted kingdom called vale which is ruled by vampires. It’s been a year since her family’s murder and she finally learned to live as a blood slave. Escaping from vale is pretty much impossible because outside the Kingdom’s walls is surrounded by wolves who’ll kill them if they cross the walls that protects them. Annika doesn’t want to be a submissive slave so she rebels against them by stealing food from them which is not intended for a blood slave. One night, when a handsome guy shows interest in her, Annika gets intrigued by him but she doesn’t know he’s a vampire prince disguised as a human. When he bolts after seeing the vampire guards, Annika believes that he’s in some kind of trouble so she helps him escape from them but later learns that he’s actually a vampire Prince. Eventually she realizes that he’s not cruel like the other vampires but getting attracting to your enemy is too tempting to resist. Annika always hated being so powerless and vulnerable, she thinks becoming a vampire might give her enough strength to escape Vale but turning a blood slave into a vampire is highly forbidden in vale and also a death sentence.

The story mainly follows three characters but I can’t seem to connect with any one of them. Annika, our aladdin in the story is a brave, stubborn, smart, and rebellious girl who wouldn’t go down without a fight. Jacen, the vampire prince is the jasmine of our story. He is pretty much complex character who hates being a Vampire. To be honest, he seemed like an okay-ish character but he didn’t impressed me yet. He’s a newly turned vampire prince who has finally learned to control  his thirst for blood. He always wanted to escape the castle walls and explore the kingdom of Vale. One day, he succeeds using his mind power and he then meets Annika who catches his attention and the attraction is mutual.  I was disappointed with the romance in this book because it felt fast-tracked. It’s definitely felt like insta-love and I hate insta-love. I wish there was more interactions before they develop feelings for each other. If you don’t have issue with insta-love then you might enjoy it more than I did. Camelia,  Queen Lailah’s adviser is the Jafar in our story. She’s a cold and cunning witch who has some evil intentions and wants to marry Jacen. As a villain, I liked her, she perfectly fits his character. I also liked the Genie who appears at the end of  book. Instead of a lamp, the Genie is trapped in something else. I’m not gonna spoil anymore for you, If you want to know more then read the book.

The plot is good but It mostly felt like Action driven plot but not a character driven. The pacing is fast and It would’ve been great if the book was longer because I felt everything   happening so fast with no character development. Some parts of the romance reminded me of twilight which seemed way too cliche.“I don’t think you’re a monster,” she said softly. “I know you think you are, but you’re not. If you were… you wouldn’t be helping me right now.” I’m already familiar with the Aladdin’s story so I have some idea how everything’s gonna turn out in the end but I still found myself enjoying this story. I loved how the author retold the story with vampires, witches and shifters. The writing is captivating through out and I’m glad the story was told from multiple POV’s. I liked the setting but I wish there was more world building in it. The story is actually set in a modern times but most of the times I forget. I feel like I was in fictional fantasy world not until the characters brings up their past which includes schools, family etc.

Overall, I liked it! The book finally concludes with a minor cliffhanger. Even though it didn’t met all of my expectations, It’s entertaining enough to hold our attention till the end and I would love to check out how the story follows in the next book.

I highly recommend this book to everyone who loves to read YA fantasy and retellings!