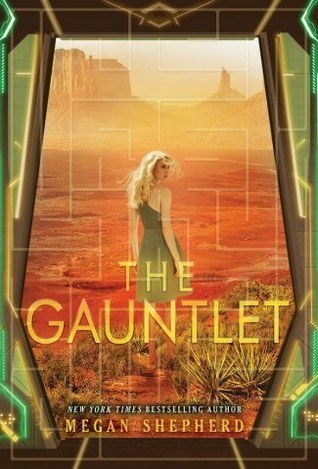 RELEASE DATE:  May 23rd 2017
AUTHOR: Megan Shepherd
GENRE: Young-Adult, Sci-Fi, Fantasy, Aliens, Adventure.
PUBLISHER: Balzer + Bray
SUMMARY: Cora and her friends have escaped the Kindred station and landed at Armstrong—a supposed safe haven on a small moon—where they plan to regroup and figure out how to win the Gauntlet, the challenging competition to prove humanity’s intelligence and set them free. But Armstrong is no paradise; ruled by a power-hungry sheriff, it’s a violent world where the teens are enslaved and put to work in mines. As Nok’s due date grows closer, and Mali and Leon journey across space to rescue Cassian, the former inhabitants of the cage are up against impossible odds.

With the whole universe at stake, Cora will do whatever it takes, including pushing her body and mind to the breaking point, to escape Armstrong and run the Gauntlet. But it isn’t just a deranged sheriff she has to overcome: the other intelligent species—the Axion, Kindred, Gatherers, and Mosca—all have their own reasons to stop her. Not knowing who to trust, Cora must rely on her own instincts to win the competition, which could change the world—though it might destroy her in the process.

The Gauntlet is a good conclusion to the Cage Trilogy. I was actually going to give this a four star but the sad ending kinda ruined everything for me so I decided to give this a 3.5 star instead. I think this is definitely the best book in the whole trilogy.  The Cage trilogy isn’t really my favorite series but the plot of this series is pretty interesting enough to read till the end. My main issue with this series is that I can’t emotionally connect with the characters but still it was an enjoyable read. Even though I wasn’t happy with the  ending, I’m glad that I finally finished this series.

After barely escaping from death, Cora and her friends flees to Armstrong hoping to find safe sanctuary and plan their next step in winning the Gauntlet. But after landing in Armstrong, they feel something is wrong and soon they find themselves as slaves working in the mines to survive. The Armstrong is ruled under a power hungry sheriff who’ll execute anyone that tries to defy her. To reach the Gauntlet in time, Cora and her friends first needs to escape from the current situation they’re in. On the other hand, Mali and Leon are on the dangerous mission to rescue Cassian from the Kindred facility. Now the fate of the humanity or maybe the whole universe rests on Cora. With different species trying to stop her from running the Gauntlet, Cora have to win the Gauntlet even if it costs her mind or her life.

I can’t connect with any of the characters but I still wanted to know how the story unfolds because it’s the finale. Cora is a strong character but she’s not really my favorite female protagonist. Comparing with the first two books, she has grown into a strong and mature character. She never gives up hope and fights till the end even if the odds are against her. Cassian is actually my favorite character in the whole series and I was a bit disappointed that we don’t have his perspective in this book. I really missed him because he was barely there in the plot and he only appears at the end part. It’s sad that Lucky is no more but his journal helps Cora to win the Gauntlet.  I liked Mali and Leon! Together they’re a great team/Couple. I really enjoyed their parts. I wasn’t much interested in Nok and Rolf’s parts except at the ending where they prepare for the assault from the enemy. I was pretty surprised with Bone break’s character who changed from a Bad guy to a good guy. I’d never expected that I would like this guy but after finishing this book, I totally loved him. I also liked the new character Willa, she’s really a good addition to the plot.

The Plot is well written! It was engaging and action packed from the start. The story moved in a good pace. There is not much romance in this book which made me a little bit disappointed because I was expecting more Cora and Cassian in this book. However, I still enjoyed the story. The twists are totally unpredictable and I was quite mad for one of the character’s death which I’m not going to reveal but it was really a sad scene. I absolutely enjoyed the Gauntlet and its interesting puzzles. The part where Cora runs the gauntlet is definitely the best part of the whole book. I liked the writing style and just like the previous installments, the story was told from multiple pov. Though I didn’t liked the switching pov’s in the first two books, I quite enjoyed it in this book because it build tension and made the story even more exciting. The world building is amazing and I’m glad that we get to explore more of this world and meet new alien species.

Overall, it was a satisfying conclusion to the trilogy but not the best! I hated the sad ending which made me angry at the author because I expected for a perfect happy ending. Anyways, I’ll still look forward to her future works.

The Cage is an interesting YA Sci-Fi trilogy filled with action, adventure and aliens but I can’t promise you that it will blow your mind away. If you want to read this series just give it a shot because you might love it more than I did!