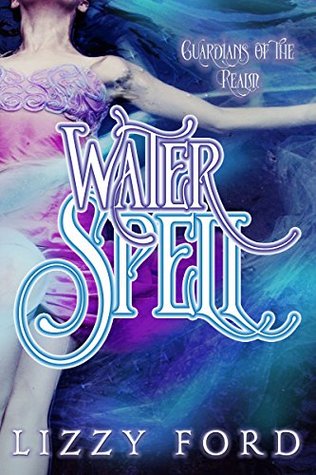 Rare water mage Sela is given no time to mourn the loss of her longtime protector and father figure before she’s faced with the one man standing in the way of her freedom: her new guardian, mage-warrior Tieran.

An Inlander with no honor, Tieran is loyal to no man, priest, king or god. If not for the magic binding him to the infuriating water mage, he would abandon her amidst the land-locked Inlands, away from the sea she yearns to visit, and pursue vengeance against those who killed his family.

Sela and her reluctant protector are soon thrown into the middle of a power struggle raging among the rulers of the four island kingdoms. To survive, both mage and warrior must overcome their distrust of one another, for the longer they resist their bond, the more perilous their journey becomes.

I’ve been wanting to check out Lizzy Ford’s books for sometime but I never gotten around to read them so when I saw this book, I wanted to give this a try because the premise intrigued me and it definitely sounded like a hate to love romance trope which is my favorite.  Water Spell is an enjoyable read with interesting characters and a decent plot. Even though some aspects of this book didn’t appealed me, I ended up liking it after finishing it. I think it’s really a great start for a new YA fantasy series.

Sela of Vurdu is a rare water mage and also a daughter of a prince. With her guardian’s impending death, Sela needs a new guardian in order to control her powerful magic. Before his time runs out, Sela’s guardian who is like a father figure to her takes her to inland in search for her new guardian mage warrior. Without aware of his intentions, Sela agrees to travel with him. Then they meet mage warrior Tieran, her new guardian. Sela is totally against to be with a savage who has no honor and doesn’t obey to any king, or god. While mourning for her old protector’s death, Sela wants to be free and decides to escape from Tieran. Tieran isn’t happy with his magical bond with the infuriating water mage, but he’s got no choice left because resisting the bond would lead to pain and madness, and he still needs to get his revenge on the people who brutally killed his sisters. With four kingdoms, vying against each other to capture Sela, they both need to set aside their distrust and be together in order to survive.

Sela is a naive, innocent and stubborn character. Being a water Mage, Sela can easily locate any water source like ponds, rivers and wells. She can easily manipulate water to protect herself from the enemies. Near the water, she’s pretty deadly but without it she’s vulnerable.  Honestly, I didn’t liked her character at first because she seemed too submissive and doesn’t fight back much but as the story progresses, she slowly begins to grow strong and then I grew to like her. Tieran is totally alpha male and also a bit barbarian. His arrogant, sexy and dominant personality definitely makes him a swoon worthy hero but I didn’t liked his rude behavior towards Sela at the beginning but slowly he warmed up to me. I enjoyed the hate to love relationship between Sela and Tieran. Because of the distrust between them, they don’t like each other at first but with every interaction they start to understand each other and eventually, their hate turns into desire and desire to love. I loved their romance and also the strong sexual tension between them. The secondary characters seemed pretty interesting too but they pretty much lacked depth.

The book has an engaging plot. Though some parts seemed a bit cliched, I really liked the concept and also the setting. The pacing is good and there isn’t any dull moment through out the book. All the twists and turns in the second half really surprised me and it made the story even more interesting. Besides the romance, this book also has some action that I really loved. I liked the writing style and the whole book is told from third person pov. The world building is pretty good. The first book is placed in a deserted land called Inlands but I’d love to explore more parts of this world. I enjoyed the elemental magical system in it especially the water magic.

Overall, I liked it! I enjoyed the plot, the characters and the setting. I think the next book going to be about new characters set in the same world and I would definitely look forward to it.

I highly recommend this book to everyone who loves to read YA fantasy romance.