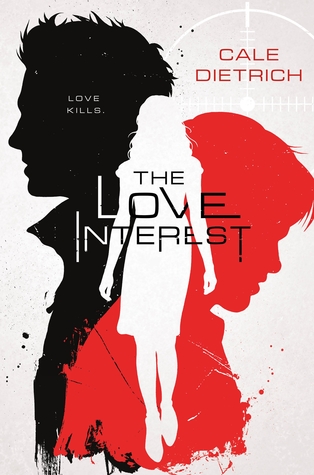 Caden is a Nice: The boy next door, sculpted to physical perfection. Dylan is a Bad: The brooding, dark-souled guy, and dangerously handsome. The girl they are competing for is important to the organization, and each boy will pursue her. Will she choose a Nice or the Bad?

Both Caden and Dylan are living in the outside world for the first time. They are well-trained and at the top of their games. They have to be – whoever the girl doesn’t choose will die.

What the boys don’t expect are feelings that are outside of their training. Feelings that could kill them both.

Well, this was a fun book to read. I loved the whole concept of this book but in terms of executing it some parts fell flat. The Love Interest is a mix of satire on the typical YA romance tropes and a spy thriller.  Though I enjoyed the satirical take on the fictional tropes, the spy action in the book didn’t thrilled me a bit. When I found this book and read the blurb, I was totally sold. It wasn’t really one of my highly anticipating releases otherwise I would’ve definitely get disappointed by it because there were too many flaws to ignore. Nonetheless, I enjoyed reading it and I liked Caden, the main protagonist of this book.

Caden aka 412 has trained hard since young to become the next Nice to get away from the hell hole called Love interest Compound(LIC), a secret agency that trains teenage spies like him to gather information. If anyone turns rogue or goes against LIC they would get hunted and killed by the stalker, a perfect killing machine. For the new mission, Caden is selected as Nice, the handsome boy next door and then he meets his rival Dylan, the broody bad boy. Both of them needs to play their roles in order to win the affection of their target, the chosen girl. Whoever the girl finally chooses will gets to live but the one she rejects will have to die. Caden and Dylan agrees to play fair without any cheating but neither expected to fall in love with each other which pretty much complicates every thing.

Caden is a fun character. I really enjoyed his wit and humor. Though he was portrayed as the Nice guy by the LIC, he is far from it. He’s definitely a bad but acts Nice in order to get selected. On the other hand, we have Dylan. He is complete opposite of Bad. He seemed too sensitive and also a bit weird. Whenever he cried I always cringed. The relationship between Caden and Dylan felt a bit cheesy and very predictable but I did enjoyed their cute romance even though some parts felt meh.  I liked Juliette, the chosen girl that both Caden and Dylan are competing for. Honestly, she wasn’t that great but I enjoyed her character in this book. She’s a young science prodigy who has a habit of creating cool gadgets. There are also other characters like Juliette’s friends, Natalie and Trevor. They aren’t fleshed out well enough which is a bit disappointing because I really wanted to know more about them.

I liked the witty writing style of the author. The book was told from Caden’s POV[first-person] but I think this would’ve been more enjoyable if it was told in dual POV. I enjoyed the plot even though there are so many plot holes in it because I liked the fun concept and it’s kinda different from the other books I’ve read before. Some parts of it felt a bit unrealistic and ridiculous especially the rushed ending where they destroy a powerful organization having advanced technology in a few hours or maybe minutes. This was tagged as a spy thriller but the plot failed to excite me much and there wasn’t much seriousness and tension in it. The relationship between Dylan and Caden seemed strange at first because I expected them to treat each other as rivals but instead they become great friends. In the mornings, they both compete for Juliette’s affection but when the night comes, they have secret night outs. There is also a death of one of the character which really felt unnecessary to me.

Overall, I like it but I don’t love it!  Despite so many issues, It wasn’t really a total disappoint for me and I don’t regret picking it up.

If you are looking for a fun and entertaining YA read then definitely pick this up but don’t expect it to blow your mind away.

12 thoughts on “The Love Interest By Cale Dietrich [Review]”