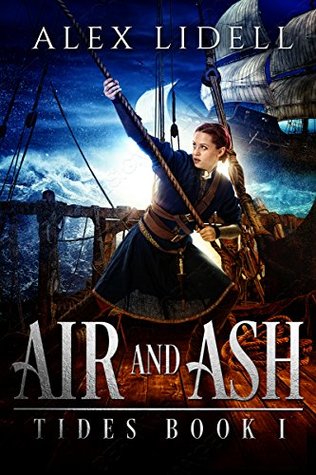 Barred from the sea and facing a political marriage, Nile masquerades as a common sailor on the first ship she can find. With a cowardly captain, incompetent crew, and a cruel, too-handsome first officer intent on making her life a living hell, Nile must hide her identity while trying to turn the sorry frigate battleworthy. Worse, a terrifying and forbidden magic now tingles in Nile’s blood. If anyone catches wind of who Nile is or what she can do, her life is over.

But when disaster threatens the ship, Nile may have no choice but to unleash the truth that will curse her future.

This book took me by surprise! I didn’t expect to enjoy it as much as I did. I picked this up right after finishing its prequel novella which I really loved. I’m not familiar with the author’s previous works so I really have no idea what to expect but this turned out to be a pretty good read. I love reading books with sea adventures and when I found this book, I couldn’t resist and it also says that it is recommended for Sarah J. Mass and Tamora Pierce fans. I loved every aspect of this book. The cover looks simple comparing with the other high end fantasy covers but I’m not one of those who judges books by their covers. Even though it didn’t entirely blew my mind away, this book was so much fun to read and I immensely enjoyed reading it from the start till the end.

After ten years of hard struggle, Seventeen Year Old Princess Nile Greysik is the lieutenant of the prestigious Faithful Ashing navy flagship. When her father, the king sends her on an impossible mission, she fails to succeed and loses her crew along with the ship. Awaiting her punishment for the failure, she’s surprised to find that her father had other plans for her which she is totally against of. To escape from a political marriage, she flees from there and volunteers to join the  League’s Joint Fleet Ship Aurora as a common sailor. On the ship, she meets ruthless officer Jana who recognizes her as princess Nile and thinks that she’s one of those bratty princesses who doesn’t know anything about hard work. After some persuasion, he agrees to not to reveal her identity and really thinks she won’t last long on the ship. Nile used to be the one who gave commands and now she’s one of the lower deck’s crew that she’s unfamiliar of.  On Aurora, Lazying around or breaking the disciplinary code will get you punished which involves a beating or lashing which is ordered by the officer Jana that every crew member avoids. Even though she doesn’t agree with the ship’s Captain’s commands, she has no choice but to shut her mouth and obey them. When a new elemental power starts to develop inside Nile, she needs to keep it a secret while learning her new ability that she has no control of. With danger approaching, how long can she keep her identity and her ability a secret?

I loved Nile! She’s a great female protagonist who isn’t a total perfection. She’s strong yet naive and insecure. In the prequel, we see the confident and fearless side of her but this book showed the vulnerable side of her. I enjoyed her character development in this book. She always wanted to prove herself worthy to her father and being Lieutenant of Faithful is the only thing she cared about the most. When she joins the fleet ship, she doesn’t care much about making friends or anything except reaching her destination without getting her cover blown but eventually she makes new friends and earns her fellow crew members respect.  Officer Jana aka Domenic looks young and handsome but on the deck he’s quiet ruthless. The first appearance of this guy is pretty sweet but when we meet him again I was like “Who da hell is this guy”. He’s arrogant, ruthless, cruel and handsome. His hot and cold personality definitely intrigued me because I like hot Jerks. He’s one of those characters that you want to hate but you really can’t. I enjoyed every interaction between Nile and Jana. While every crew members in the lower deck are afraid of him, Nile doesn’t fear him at all and it’s pretty enjoyable to watch every time she defies him and shows him that she isn’t weak like he expected her to be. There isn’t much romance in this book but there is some tension between these two and I absolutely loved the hot kiss at the end. I really can’t wait to see how their relationship progresses further. Mr. Catsper is another interesting character that caught my attention. He is arrogant, cocky and quiet deadly. The author didn’t gave him much focus but I’d love to know more about him. I also liked Ana! She is such a sweet and caring character whom Nile befriends on Aurora.

The plot is enjoyable and entertaining. Even though I hate slow paced plots surprisingly I found myself enjoying this book. I was totally immersed in to the story right from the first page. Most of the plot centers around Nile’s struggle to adapt to her new position and survive on the ship while controlling her new ability. I also enjoyed the sea action and the forbidden attraction between Nile and Dom. The writing style is pretty good and the whole story is told from Nile’s (first person) perspective. The world building is amazing but it did took some time for me to understand everything. I loved the unique customs and the elemental magic system. I was little bit disappointed that there’s not much action as expected and I really hope the next book makes up for it.

Overall, it is a good read! It was a perfect blend of adventure, magic and light romance. There is no major cliffhanger at the end but the book concludes with an interesting end and I can’t wait to check out the next book.

I highly recommend this book to all the YA fantasy lovers who likes to read books with Seafaring adventures, magic and strong-headed female lead.