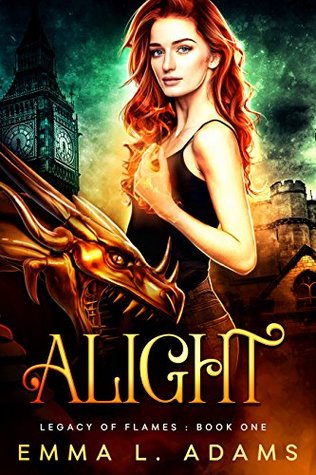 Two years ago, when the faeries attacked the mortal realm, all supernaturals were dragged into the open. Unfortunately for dragon shifters like Ember and her sister, dragons are still hunted by humans and supernaturals alike. Keeping a low profile is difficult with monsters roaming the streets, but Ember and her band of rogue shifters have managed to survive.

Until their oldest enemy, the supernatural-hunting Orion League, emerges from the shadows and captures Ember’s sister.

To get her back, Ember is prepared to walk into the depths of London’s magical underworld, even if it means kidnapping a lethal ex-hunter who’d like nothing better than to add her name to his kill list. His inside knowledge of the League is the key to saving her sister, but with their allies turning on them, Ember must choose who to trust or meet the same end as the other dragon shifters.

Okay, I absolutely enjoyed reading this book! I really didn’t expected to enjoy it as much as I did. It was actually set in the same world of Changeling Series which I haven’t read but I still found myself enjoying this. I love books with dragons, fae and werewolves etc., and this book has them all.  It was thrilling and action packed from the start till the end. I liked all the characters, the world building and the intriguing plot. This is my second book by Emma L. Adams and I’m very impressed. I really look forward to read more books from her.

Ember and her sister Cori are the rare dragon shifters who’s been wanted by humans and Supernaturals alike. Two years ago when the fae attacked on the mortal realm, the Orion League has been hunting all the supernaturals. While hiding from the League, Ember hunts the monsters from the fae realm in exchange for payment so that she could help her shifter friends who sheltered them. When a job goes wrong, Ember’s sister gets captured by the League. In order to get back her sister, Ember needs the help of someone from the League. When her paths crosses with one of the hunter, she captures him and later finds out that he’s an ex-hunter called Astor who seems to hate her kind. To save her sister, Ember needs to rely on the infuriating hunter who has all the knowledge that can help them break into the Orion stronghold. With help of her two shifter friends and Astor, Ember infiltrates the Orion stronghold but getting out from there isn’t an easy task it’s impossible.

The characters in this book are in their 20’s. I loved Ember! She’s a strong protagonist and also a kickass female dragon with deadly claws. She kinda reminded me of Ember from the talon series by Julie Kagawa and to be honest, this Ember seemed more badass than her. I totally fell in love with Astor. He is hot, fun, sarcastic, smug and a bit cocky who likes pissing off fairies. There isn’t much romance in this book but there is something going on between Ember and Astor. I enjoyed every time they clashed and not to forget that hot kiss. I can’t wait to see how their relationship develops further. I also liked the interesting supporting characters Becks and Will. Becks is a cat shifter and also a sassy character. She’s saved by Ember after the faerie attack and they’ve been friends since then. Will is a half witch and a half gargoyle shifter who later joined them. He’s both fun and witty character. He possess some great skills and quite good in diverting enemies.

I really liked the plot! It was fast paced, entertaining and action packed through out. There isn’t any dull moment in this book and there are some twists in the story which made it more enjoyable to read. I also liked the wonderful writing style of the author and I enjoyed reading the entire story from Embers Perspective. The world building is good but it did took some for me to get a clear picture of it because I wasn’t familiar with Changeling’s world. I’ll look forward to explore more of this world.

Overall, it was a great read! I think it’s a great start for a new series. The book finally concluded without any shocking cliffhanger but there are so many questions left unanswered and I can’t wait to find them out in the next book which I’m going to picking up soon.

I highly recommend this to all the Urban fantasy/paranormal lovers who loves to read action-packed books with a badass female lead and a hot love interest.

“Oh, that’s good news,” I said, my voice slightly shakier than I intended. “And I’m not?”
“Far from it.” His hand snagged my wrist, brushing the pulse beating frantically at the point where my claws were seconds from bursting free. “You’re something else entirely.”
“You’ll be minus one head if you don’t let go of me.”

He dropped my wrist, casually, not like it burned him—though that might well have been the case. Heat poured off my skin when I was stressed. But he didn’t comment, just tilted his head as though I was some peculiarity which had caught his attention. Not a predator watching her prey.

My hands rippled as claws replaced skin, leathery scales covering my wrists. The transformation happened in a heartbeat, leaving my left claw inches from his neck.
“Going to kill me, darling?” he whispered.

His flat, empty eyes contrasted with the easy smile curling his lip. Apparently he still got a kick out of winding me up this close to decapitation.
“This isn’t a joke, Astor,” I hissed. “Your people have been trying to kill me my whole life. Now I know you don’t have any information that might help me rescue Cori. I wouldn’t tempt me.”

“If your conscience bothers you about the likes of me, you won’t have the strength to go ahead with this ridiculous rescue mission. You sister’s life was over the second they put their hands on her, darling.”

Red literally flashed before my eyes as my claws moved—and he did, too, avoiding the claw point by a hair’s breadth. He did dodge it after all. My heart hammered against my ribs and heat continued to pour from my skin. I was surprised not to see smoke curling from my hands.

“Don’t call me that,” I said in a low growl more animal than human. “You don’t know what I wouldn’t do to get her out of there.”
“I think I have some idea.” His gaze drifted to my claws, where they remained at his throat.