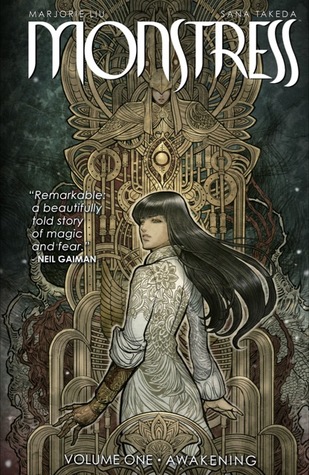 RELEASE DATE:  July 13th 2016
AUTHORS: Marjorie M. Liu, Sana Takeda
GENRE: Adult, Fantasy.
PUBLISHER: Image Comics
SUMMARY: Set in an alternate matriarchal 1900’s Asia, in a richly imagined world of art deco-inflected steampunk, MONSTRESS tells the story of a teenage girl who is struggling to survive the trauma of war, and who shares a mysterious psychic link with a monster of tremendous power, a connection that will transform them both.

I don’t read much graphic novels but I love reading manga comics and it’s one of my favorite addictions besides reading books. Monstress caught my eye because of its beautiful illustrations and also the intriguing premise which totally sounds like my kinda read and I’ve heard many great things about it. After I was finished with the first volume, I was left wanting for more. It’s visually a stunning graphic novel. I loved the whole plot, amazing world building, the beautiful illustrations and not to forget the badasss main character.  The first volume collects Chapter one to chapter six and now I can’t wait for more.

The story is set in a world which is divided into two parts the Federation and the arcanic realms. The Federation territory belongs to the humans and the Arcanic realms to the arcanics – hybrids of ancients and humans.  After a war broke out between these two, they finally came to a truce and they build a shield wall which acts as a border between them.  Maika Halfwolf a seventeen year old arcanic who looks more human than her fellow arcanics intrudes into the city of Zamora, the borderland city that once held these races together. She disguises herself as a human in order to find about herself and the past she can’t seem to remember which involves her mother. When things doesn’t go as planned she ends up in a situation that she never wanted to face again. In the midst of a new major war brewing, Maika needs to find all the answers before her time runs out.

Maika Halfwolf is deadly and totally badass character. Her doll face looks and one missing arm definitely makes her look very intriguing. Despite her tough personality, she’s also vulnerable who’s always fighting with her inner demons. The secondary characters are pretty good too. I loved Kippa and Mr. Ren, Maika’s travel companions. Kippa is a cute little fox girl that Maika rescues from Cumaea, a witchy faction of humans who collects Arcanics for their body parts and other dirty experiments. She is quite cute and adorable character. Despite fearing Maika’s dangerous otherself, she still decides to follow her. Mr. Ren is a two tailed cat who can actually talk and he seems to have a lot of knowledge on so many things and helps Maika along her journey. I can’t believe I’m saying this but I also liked the demonic thingy that is living inside Maika which looks pretty ugly. There’s also Maika’s friend Tuya who we don’t know much about yet but she’s kinda mysterious character and I’ll look forward to know more about her.

This book has an interesting plot but at the beginning I was a bit confused because we get thrown into the story with no background info and it took some time for me to understand what’s really happening. It is first paced through out and the story starts with an interesting start where our heroine is sold as a slave to the cumaea in an auction. From the start, I was hooked to the story and it was totally unputdownable. The lecture at the end of each chapter has helped me a lot to understand the story much better. Though the protagonist is a teenager, this book is definitely not for young readers, its an adult fantasy read because of the lots of gore, violence and partial nudity. Besides the action, I also liked the light humor in the plot which made the story even more enjoyable to read. The beautiful illustrations are definitely the best aspect of this book and the art really looks close to Japanese manga. I loved the world building! The Known World is a fascinating world filled with humans along with ancient beings, half breeds, old gods, mystical cats with multiple tails that can also talk. The premise states that it was  set in a steampunk world but sadly, there aren’t many steampunk elements in this book. Anyways, I’m quite excited to explore more of this world.

Overall, I loved it! I immensely enjoyed devouring this book and I’m so glad that I gave this a try. Now I’m eagerly waiting for Volume two which is going to be released soon in June 2017.

I highly recommend this book to all the fantasy lovers! Even if you aren’t into graphic novels just give this a try.

So, What do you think of this novel? Have you read this yet? If you read graphic novels what’s your favorite one?
Please Feel Free To Comment Below. ❤
See You In The Next Post and Have a Great Day! 🙂