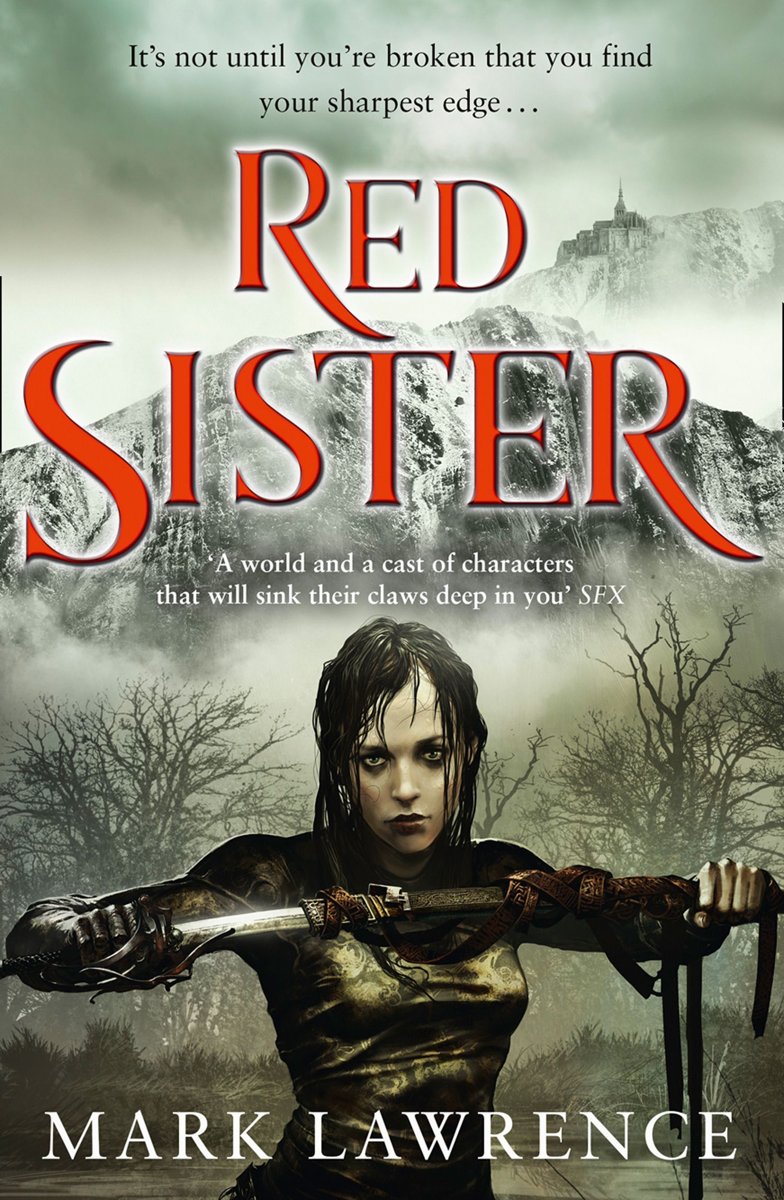 At the Convent of Sweet Mercy young girls are raised to be killers. In a few the old bloods show, gifting talents rarely seen since the tribes beached their ships on Abeth. Sweet Mercy hones its novices’ skills to deadly effect: it takes ten years to educate a Red Sister in the ways of blade and fist.

But even the mistresses of sword and shadow don’t truly understand what they have purchased when Nona Grey is brought to their halls as a bloodstained child of eight, falsely accused of murder: guilty of worse.

Stolen from the shadow of the noose, Nona is sought by powerful enemies, and for good reason. Despite the security and isolation of the convent her secret and violent past will find her out. Beneath a dying sun that shines upon a crumbling empire, Nona Grey must come to terms with her demons and learn to become a deadly assassin if she is to survive…

First of all this, this is my first Mark Lawrence book and I was very excited to read it. Secondly, this book has lots of praises and I had very high expectations on it. When I first read the blurb, I thought this is going to be a guaranteed 4 or 5 stars book for me because I love books with female assassins and Nona sounded totally badass but sadly, I didn’t enjoyed the book as much as I expected to. Honestly, this is really a great fantasy read but I had few issues with it that hindered my enjoyment but not enough to hate it. I’ve seen so many people loving it so this is a clear case of it’s not you, it’s me. However, I liked the entire concept, the main character, riveting action, the magical system and the world building.

The story follows Nona grey, an eight year old young girl who is falsely accused for murdering a royal heir of Tacsis family and sentenced to hanged. Surprisingly, she is saved by Absess of Sweet Mercy Convent, a place they train young girls like her to be killers. Upon arriving at the convent, everyone is pretty surprised by her peasant appearance. People in Abeth are descended from four tribes Gerant, Hunska, Marjal and Quantal. Nona belongs to a Hunska tribe who are distinguished by their dark eyes, dark hair and great speed. While training at the Sweet Mercy Convent, Nona fights her inner demons and the dark past that keeps haunting her. When Powerful enemies began to sought her, Nona needs to become stronger in order to survive. After few years, when her past finally catches up with her, Nona finally decides to embrace her destiny that she can’t escape from any longer.

Nona is totally a kickass character who also loves food. She’s strong, fierce and very deadly. Besides her tough and stubborn personality, she also has a soft side to her that strongly believes in friendship. From the start, she is a total mystery to me, when she arrived at the convent she’s been harboring many secrets that she’s afraid to reveal but when everything comes unveiled at the end, I was totally shocked. This book also has some good supporting characters like Hessa, Clera, Ruli, Arabella and Zole but honestly, no one intrigued me as much as Nona. I quite enjoyed the friendship between Nona, Clerra, Hessa, and Ara and most of the story is surrounded by these four girls. The Nuns and the sisters in the Sweet Mercy Convent are definitely not sweet. They’re quite deadly in their own way.

The plot is very interesting but here are the reasons that I didn’t enjoyed it as much as others did. This book is very very hard to get into and a lot of times I found myself scratching my head whenever some things seemed confusing as hell but eventually as the story progresses everything became clear to me. I had the same problem with the final Empire by Brandon Sanderson but I ended up loving it because it’s totally epic, if you haven’t read it yet then I strongly recommend you to read it. The story began with a great start but when it came to the middle part I started to lose my interest when everything became a routine with all the training classes which made me a bit bored and slow pace is really not my thing. The ending is definitely the most exciting part of this book and also one of my favorite scenes. The whole book is told in third person POV. Well, I’m not a big fan of third person POV’s because they always make it difficult for me to connect with the characters and I really wish this was a first person POV so I could live in the story and not see everything in third person. The writing style of the author is pretty good, it’s beautiful and lyrical. The world building is amazing. Though we don’t see much places in it, I liked the world the author has created and I really can’t wait to explore more of it. I liked the magical system too but It did took some time for me to grasp everything.

Overall, It is a good read! Though It didn’t blew my mind away as it did with others, I’m definitely going to pick up the next book in the series when it releases. Nona is finally grown up *YAY!!!* so I’m hoping the next book going to be pretty exciting to read.

I highly recommend this book to all the high fantasy lovers and also to the readers who likes kickass female protagonists. Although it was tagged as Adult fantasy, I think this book is also suitable for Young Adult readers.